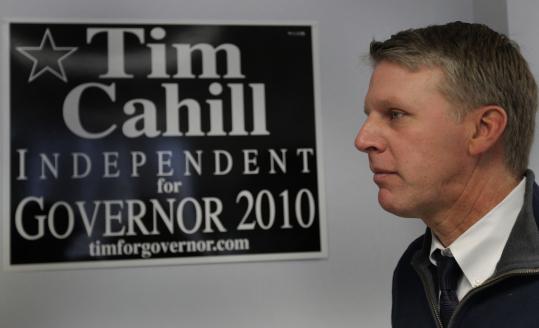 The Republican Governors Association is intensifying its campaign to beat down the independent candidacy of state Treasurer Timothy P. Cahill and give the GOP candidate, Charles D. Baker, a clearer shot at victory in the fall election.

Two weeks after launching $1 million worth of attack ads aimed at Cahill, the association began airing a second onslaught of negative television, radio, and Internet spots yesterday, a clear indication that the Republican Party, eager to reclaim the corner office, sees Cahill as a major impediment six months from Election Day.

The ads prompted Cahill, a former Democrat, to retort: “When they can’t beat you on the issues, they throw mud and see what sticks against the wall. We’ll clean up the mud as best we can, and we aren’t going away.’’

Cahill said the ads distort his record and are factually wrong in some instances, but he anticipates they will cause short-term damage in the polls because his campaign will not spend heavily to answer them this early in the race.

Cahill, who is vying with Baker for conservative and independent votes as each tries to unseat Governor Deval Patrick, a Democrat, yesterday outlined proposals for a new tax credit and tax exemptions designed to spur the creation of new small businesses in the state.

Tim Murtaugh, a spokesman for the association, said the purpose of the ads, which also take some swipes at Patrick, is “to educate voters about Tim Cahill’s record and his similarity to Deval Patrick.’’ Murtaugh would not discuss the cost of the ad buy or whether the association has conducted any polling to determine whether its ads are having any effect.

By law, the association may not coordinate its advertising with the campaign of Baker, who is not mentioned in the spots. The state Republican Party and Baker’s campaign have, however, launched similar attacks on Cahill in recent weeks, trying to link him to Patrick and dubbing him, in the words of Baker spokesman Rick Gorka yesterday, “the same insider who has been working on Beacon Hill for eight years.’’

A new 60-second radio spot from the association, titled “911,’’ takes a stab at humor. An irate woman calls an emergency line to report that Cahill “turned out to be just another Beacon Hill politician’’ and then complains that he hands out contracts to his supporters, bought a fleet of cars at the state lottery, and “spent over a million dollars redecorating one of his offices. Fancy TVs. Blue lighting. Art deco!’’

“Are you sure you’re not confusing him with Governor Deval Patrick?’’ the operator asks.

“They’re practically the same,’’ the caller says, in an apparent reference to Patrick installing new drapes worth $12,000 when he took over the governor’s office.

Cahill said the assertions are distortions. The 73 vehicles were replacements used to service 7,500 lottery agents around the state more economically than reimbursing state employees for putting 1.7 million miles on their personal vehicles each year, he said. The redecorating is a reference to $1.3 million in leasehold improvements made by the landlord at the lottery’s Braintree headquarters in 2004 as part of a 10-year lease extension with higher rent. “I don’t have an office in Braintree,’’ said Cahill, who works out of the State House. The improvements included increased handicapped accessibility, weather-stripping, work on the warehouse, and remodeling the lobby, he said.

In the association’s new 30-second TV spot titled “Coincidence,’’ a narrator accuses Cahill of raising property taxes and doubling the budget while a city councilor in Quincy, presiding over skyrocketing expenses at the lottery, and raising campaign contributions from interests his office oversees.

Cahill, who served on the nine-member council for 15 years, said mayors set tax policy, the city operated within its means, and did not attempt to increase taxes through an override of Proposition 2 1/2, contrasting that to Baker, who supported a local override during his term as a selectman in Swampscott. He also said the lottery budget is at the same level it was three years ago, and that his decisions as treasurer are not influenced by campaign contributions.

The two-term treasurer said his campaign will conserve its resources and not be drawn into an expensive early ad war with a Baker ally. “They’re doing it because we’re beating their candidate, and we’re a real threat,’’ Cahill said, referring to one public poll last month that had Cahill trailing Patrick and Baker in third place. Other polls have had Baker second, however.

Cahill’s campaign did issue two ads on the Internet in response to the initial Republican association assault. In one, which closely parallels an ad Republican Scott Brown used in response to an onslaught of attack ads in the US Senate special election in January, Cahill decries negative campaigning. In another, he rebuts the association’s assertions, focuses on Mississippi Governor Haley Barbour, the chairman of the association, and asks viewers: “Who are you going to believe, the guy from Yazoo City, Miss., or the guy from Quincy?’’

Patrick has generally avoided the Baker-Cahill scrum, but yesterday criticized the association’s “consistently negative approach’’ and vowed to run a positive campaign.

“I want to be clear: you haven’t heard any negative ads from me and from my campaign, and you won’t,’’ he told reporters. “I don’t believe in that kind of campaigning. I believe it’s a turnoff for voters. I think what we have to do is show people what we are for, and not just what we are against.’’

Michael Levenson of the Globe staff contributed to this report.