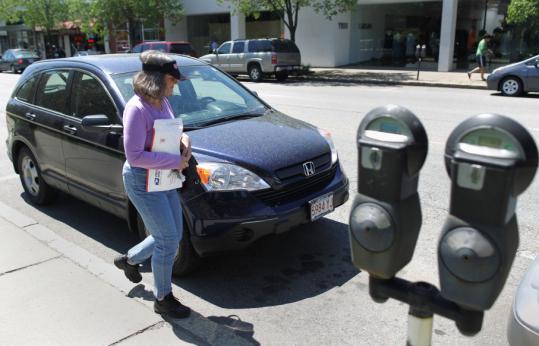 “I don’t think it’s a good idea at all,’’ said Jacquie Parker of the technology. (Jonathan Wiggs/ Globe Staff)
By Peter Schworm Globe Staff / May 10, 2010

NEWTON — Drivers be warned: In the perpetual cat-and-mouse war between parking enforcement and motorists trying to park without getting a ticket in this city, the cat just got a powerful new weapon.

Automatic license plate recognition — a kind of RoboCop of the parking world that uses a panoramic video camera, laptop computer, and sophisticated software — detects cars that have been parked too long and sounds an alert to write a ticket.

The city bought three systems for $50,000 and plans to install them in parking enforcement vehicles this month. Officials believe the technology could double the number of parking tickets the city writes each year and sharply increase the $1.8 million in annual parking fees it collects.

Newton parking officials are delighted by the prospect of machines that will allow officers to rapidly cover large swaths of the city instead of just blocks under the old system.

Drivers are not so pleased.

“It’s outrageous,’’ Linda Jacobs, a longtime Newton resident and one of many incensed by the development, said on a recent day in Newton Centre.

Hugh Downing, executive officer of the Newton Police Department, had a ready answer.

“If you haven’t done anything wrong, you have nothing to worry about,’’ he said.

Similar technology has been put to use by a number of police departments across the state in recent years, but largely to enforce outstanding arrest warrants or hunt for serious offenders. Some communities, including Boston, use such a system to locate repeat parking offenders.

But Newton will probably be the first to systematically use the technology to detect everyday violations. Officials in communities that have bought license plate recognition systems for police work seemed bemused by Newton’s move.

“To me, that’s a pretty expensive piece of machinery to use for just that purpose,’’ said Brian Gilligan, a captain with the Salem Police Department. “I’ve never heard of that. We use it for law enforcement.’’

Even so, it is not hard to see the appeal of such devices in a job that is typically slow and laborious, often requiring parking enforcement officers to work on foot. In some zones where total parking time is restricted, officers must record license plate numbers and note the time by hand. The new equipment liberates them to simply drive, letting the machine collect the information. When officers repeat their routes at regular intervals, the system sounds an alert whenever it detects a car that has been in a spot too long.

Chelsea installed systems last fall to search for cars with many past-due parking tickets, and within 45 days had collected $16,000.

Such enthusiasm by parking enforcers is often met with scorn and indignation by drivers. In Newton, some complain that parking rules are already too strict, with short maximum stays that make it hard to avoid tickets. Others are unsettled by the prospect of local officials gathering information about their whereabouts.

“It almost seems Big Brother-ish,’’ said Sue Mullen, 39. “It has that tone to it, and that’s not supposed to be what Newton is about.’’

Hoping to avoid a revolt, Newton officials are planning to go easy on the parking public for a while.

“We just want to be careful not to tread too heavily on people,’’ Downing said. “We want to take baby steps.’’

Newton residents said the parking enforcement is plenty efficient. For years, they have watched ticket-writers’ unsparing efforts with pained admiration.

“You can’t be even a little late getting back,’’ Jacobs said. “And don’t bother trying to talk your way out. I’ve tried.’’

Jacobs said Newton residents already caution visitors about the city’s no-nonsense approach to parking violations, but now will step up their warnings.

Early Wednesday afternoon, Jacquie Parker, 63, hustled back to her car. Her meter had run out, but the windshield was clear. She had made it. But when she heard about the new system, her relief faded away.

“I don’t think it’s a good idea at all,’’ she said. “I think they should just raise property taxes instead.’’

Parker had passed up a trip to in fear of getting a ticket, and some business leaders worry the new system could hurt local businesses.

“You certainly don’t want to discourage people from visiting the villages,’’ said Thomas J. O’Rourke, president of the Newton-Needham Chamber of Commerce. “You want people to be able to spend time in the shops and restaurants.’’

At a hearing in March before Newton’s Board of Aldermen, supporters mentioned Natick as one of the communities that use the systems. Lieutenant Brian Grassey said police there do not use it, but recalled his own Newton parking experience.

“It was on a Saturday. They got me within 2 minutes,’’ he said. “I looked around to see who had done it, how they got there so fast. But it was just me and the breeze.’’

Clarification: A Page One story on Monday about a license plate recognition system being introduced in Newton to identify parking violations may have wrongly implied that enforcement officers would use the technology at metered spaces. Mayor Setti Warren said this week that the scanners will be used only on residential streets with parking limits.