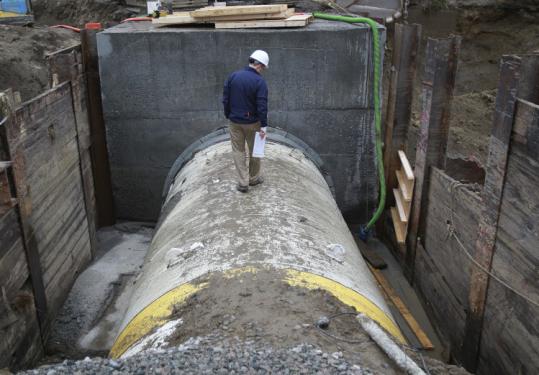 One of the recent infrastructure failures includes the water pipe rupture in Weston. (Suzanne Kreiter/ Globe Staff)
By Michael Levenson and Eric Moskowitz Globe Staff / May 10, 2010

A ceiling collapse in a Big Dig tunnel kills a woman heading to the airport. Crumbling railroad ties threaten the daily commute for thousands on the South Shore. A ruptured pipe connection puts 2 million residents of Greater Boston under orders to boil their drinking water.

All were recently built projects; all failed spectacularly. And while each failed for unique reasons, some still unknown, they are all vivid reminders of the vulnerability of public works projects that millions rely on to move fresh water, cars, and commuters in a seamless fashion. Even some engineers are frustrated.

“I’m just saying, can’t we do anything right anymore?’’ said Jerome J. Connor, a civil engineering professor at MIT. “Or are we a bunch of screw-ups, and that’s what’s happening?’’

Throughout American history, public works have been symbols of civic pride and the can-do American spirit — damming rivers for power, laying rail lines across the West, building the interstate highway system, and delivering electrical power to the rural South.

While old projects with decades of strain are expected to give out over time, the recent failures of projects barely a decade old raise a host of questions: Were there errors in design? Shoddy work? A lack of oversight? A focus on speed and budget at the expense of quality? Or just bad luck?

“Especially if a few things go wrong, people say, ‘What is going on with us as a society and a community?’ ’’ said Gregory K. Dreicer, a historian of technology and curator at the Chicago Architecture Foundation. “And I think that’s good. People should think about the systems that are supporting their lives every day, and who’s designing them, and why are they designing them the way they are.’’

The Big Dig tunnel where ceiling panels fell in 2006 was hailed as a modern engineering marvel. The Old Colony railroad ties now crumbling were put into use in 1997 and the manufacturer said they would last 50 years. The 1-ton clamp that broke on the water pipe in Weston last weekend was installed only seven years ago.

Farther afield, the oil rig that exploded in the Gulf of Mexico last month, killing 11 workers and spreading a devastating slick of crude, was built in 2001 and was considered among the most technologically advanced drilling platforms in the world.

At a time when the federal government is spending billions in stimulus funds to restore crumbling infrastructure and build new roads, bridges, and high-speed rail lines, questions about the recent failures have become especially urgent.

“Maybe you just need some really tough enforcers to scream, ‘Hey, we want quality,’ ’’ Connor said. “You need to address it, though, because it’s the tip of the iceberg.’’

For much of the 20th century, public works projects were centerpieces in American cities and towns, with giant water towers and grandly designed water department buildings held up as signs of pride and progress, Dreicer said.

Today, he said, public works projects are often pushed out of sight, because people care less about erecting monuments and just want the water and electricity to work.

“People take infrastructure for granted,’’ Dreicer said. “The only time they think about it is when something goes wrong.’’

“What people see is a big, disastrous water main break that causes a whole lot of people inconvenience,’’ added Robert R. Albee, a past president of the American Public Works Association, who spent 12 years as director of engineering for the Big Dig.

“What they don’t see is that that was a very, very small element of a much larger project that had millions of moving parts to it. . . . Something did break. But the overall good of that project was absolutely enormous for Boston.’’

Some observers, reflecting on the recent failures in Boston and beyond, wondered if enduring works of infrastructure, such as the Brooklyn Bridge, are possible in a political culture that demands that anything done by government be done as cheaply and quickly as possible.

“I’m part of this problem,’’ said Douglas B. MacDonald, a former secretary of transportation for Washington state and a former director of the Massachusetts Water Resources Authority. “We in the infrastructure business have been trying to convince the American public that we can be good stewards of money if we deliver projects on time and on budget.’’

But, ultimately, “what you really need is a common-sense proposition, down the middle, that takes into account price but realizes a cheap price for a bad job is no bargain,’’ MacDonald said.

Connor said the recent problems locally and nationally have made him reflect on the problems facing American automakers and, closer to home, of the Frank Gehry-designed Stata Center at MIT, which began to crack, mold, and leak not long after it was built.

“We’ve got to raise that issue among people who are spending the public money, to focus on quality,’’ he said. “A cheap meal is also cheap food. If you want an expensive meal, you have to pay for it.’’

Of course, neither the $15 billion Big Dig nor the $728 million water tunnel that ruptured would be considered cheap.

Even so, the Big Dig ceiling collapsed after workers used epoxy to secure the ceiling bolts, even though the type was not strong enough for such use.

The Old Colony Railroad used concrete ties, expecting them to outlast traditional wood ties; now that they are crumbling, the railroad is replacing them with wood.

Frederick P. Salvucci, a former state secretary of transportation instrumental in planning the Big Dig, said the public expects massive projects to function as reliably as mass-produced products, which are tested and retested.

“And yet we expect complex public infrastructure projects to always be perfect,’’ he added. “And that’s the right expectation, but it’s a very complex challenge.’’

Of course, building a pipe or tunnel is a human endeavor, and some amount of error is inevitable.

Civil engineers emphasize that the recent failures represent only a tiny fraction of the projects built. The vast majority work as designed: New waste-water treatment plants and tunnels have made Boston Harbor cleaner; Big Dig tunnels have made it easier to drive through the city while creating downtown parks.

When projects do fail, it is usually after years of wear, or relatively early in their lives, when first put under stress, said Robert S. Stephens, president of the Boston Society of Civil Engineers.

“From that standpoint, it’s not a surprise to me that this would be uncovered,’’ he said of the recent failures.