Case is made vs. US marriage law 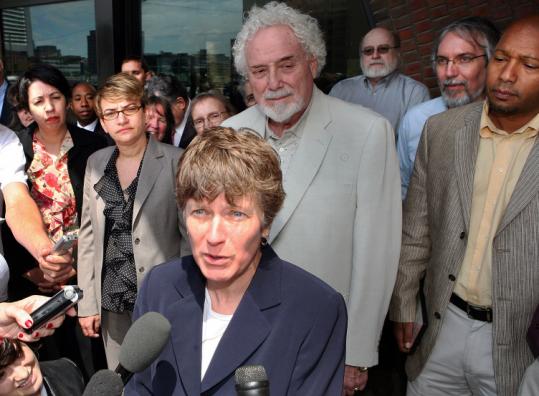 A lawyer for 17 gays and lesbians who wed in Massachusetts urged a federal judge yesterday to strike down the 1996 federal law that defines marriage as a union exclusively between a man and a woman, calling it an unconstitutional intrusion on a matter previously left to states.

The case is widely considered the first serious legal challenge in the nation to the Defense of Marriage Act, and puts the Obama administration in the awkward position of defending a law that it says it opposes but believes is constitutional.

Mary L. Bonauto, a lawyer for the Boston-based nonprofit Gay & Lesbian Advocates and Defenders, argued in US District Court that the federal government had always let states decide who was legally married until it passed the law in question.

“Your honor, the only thing that changed here was who was going to marry,’’ Bonauto told US District Court Judge Joseph L. Tauro. Bonauto also led the lawsuit that resulted in the landmark 2003 decision by the state Supreme Judicial Court legalizing gay marriage in Massachusetts.

Bonauto said that because of the law, the federal government treats the plaintiffs — seven gay and lesbian couples and three men whose husbands have died — as second-class citizens. They are ineligible for numerous federal benefits that heterosexual couples receive, including health insurance for spouses of federal employees, retirement and survivor benefits under the Social Security Act, and eligibility to file joint federal income tax returns.

W. Scott Simpson, a Justice Department lawyer defending the government, countered that the Obama administration agrees that the federal law is discriminatory and supports its repeal. But Simpson said the department is obliged to follow the longstanding practice of defending federal laws signed by previous presidents as long as the statutes are constitutional, which, he contends, the Defense of Marriage Act is.

“This presidential administration disagrees with DOMA as a matter of policy and would like to see it repealed,’’ he said, in a courtroom overflowing with supporters of gay marriage, including the 17 plaintiffs, who were allowed to sit in the jury box. “But that does not affect its constitutionality.’’

Congress had a legitimate rationale to pass the federal law 14 years ago, he said, given that some states had begun discussing legalizing same-sex marriage. The statute, he said, preserved the status quo — marriage reserved strictly for heterosexuals — and prevented federal agencies from having to keep track of which states had legalized gay marriages and which had not.

Several supporters of the suit did not buy the government’s argument, including the notion that President Obama, who has spoken repeatedly of repealing the federal law, had to defend it.

“I think the Obama administration, if they believe the statute is unconstitutional — which it clearly is — does not have a duty to defend it. In fact, they have a duty not to defend it,’’ Shannon P. Minter, legal director of the National Center for Lesbian Rights, who took a flight from San Francisco to attend the arguments, said afterward.

The case is being watched by supporters and opponents of gay marriage and is widely expected to end up before the US Supreme Court, regardless of how Tauro, an appointee of the Nixon administration, rules.

A victory by the plaintiffs would not extend same-sex marriage beyond where it is legal — five states and the District of Columbia. Nor would it require states where gay marriage is not permitted to recognize the marriages of same-sex couples who wed in other states. But it would be a huge symbolic victory for gay-marriage proponents and would dismantle a controversial federal statute that affects more than 1,000 marriage-related benefits.

Critics of the suit also say the stakes are high.

Kris Mineau, president of the Massachusetts Family Institute and an outspoken opponent of same-sex marriage, said the lawsuit is a thinly veiled attempt to spread gay marriage to other states. He said voters in 31 states have passed ballot measures banning gay marriage and that proponents of the lawsuit turned to the courts because the tide of public opinion is against them.

“This is a wedge to try to defeat the DOMA unilaterally,’’ Mineau said in a telephone interview. “And once the camel has its nose under the tent, it’s not going to be content with a half a bite.’’

The plaintiffs say the law violates the equal protection guarantee of the Constitution.

Dean T. Hara, a plaintiff who was married to retired congressman Gerry E. Studds from May 2004 until Studds died in October 2006, said the federal government denied him a $255 lump-sum death payment and thousands of dollars in benefits as the surviving spouse of a retired federal employee.

“We are not a country that was built on double standards,’’ said Hara, a 52-year-old Boston financial adviser. He rejected arguments in the government’s brief that Congress is entitled to respond “incrementally’’ to changing social mores.

“I think that’s the equivalent of going to Rosa Parks and saying, ‘You can move up one row of the bus at a time and eventually you’ll get to the front,’ ’’ he said outside the courthouse.

The federal government has asked Tauro to dismiss the suit, while the plaintiffs have asked to rule in their favor on summary judgment. Tauro praised the lawyers for their arguments and said he would take the matter under advisement.

Jonathan Saltzman can be reached at jsaltzman@globe.com