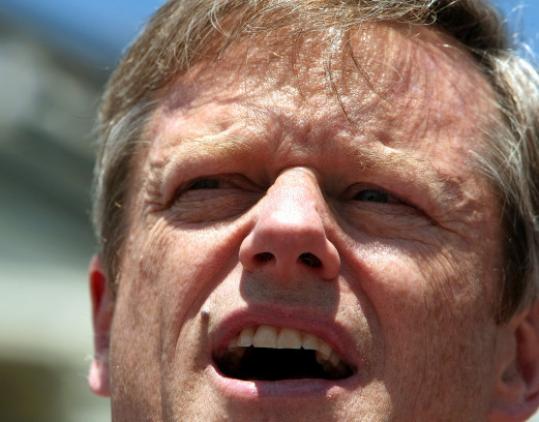 Charles D. Baker was asked about the homeless issue during a Tuesday press conference, where he unveiled a series of reforms he said would trim $1 billion from the state budget. (john tlumacki/globe staff)
By Noah Bierman Globe Staff / May 6, 2010

Republican gubernatorial candidate Charles D. Baker yesterday backed away from a proposal he made Tuesday to require anyone seeking help from a Boston homeless shelter to prove he or she is a legal resident of the country.

Baker’s campaign, taking flak from his Democratic rival, Governor Deval Patrick, for saying that even those at the Pine Street Inn should be forced to show proof of residency, sought to clarify his statements, saying they had been misrepresented.

“Emergency situations, nobody will ever be turned away,’’ said Baker campaign spokesman Rick Gorka.

Patrick’s campaign issued a statement earlier in the day that cast Baker’s position as over-the-top, asserting that he would leave homeless children in the cold of night.

“Baker’s proposal to require homeless shelters to turn away people, including veterans and even families with children, if they can’t produce proof [of] residency is inhumane and wrong,’’ Patrick said in the statement.

The debate over immigration has been rekindled nationally — and reverberated locally — since the recent passage of a strict Arizona law that would make carrying immigration documents a legal requirement and give added authority to police in detaining people suspected of entering the country illegally. Both Democrats and Republicans have seen advantage in raising it because of its potential to mobilize supporters.

Baker was initially asked about the homeless issue during a Tuesday press conference, where he unveiled a series of reforms he said would trim $1 billion from the state budget. One element of his plan, intended to save $10 million to $25 million, would require those seeking state benefits to show proof of legal residency.

Asked by a reporter whether that would mean turning away people needing a bed at the Pine Street Inn, a shelter in Boston’s South End, Baker said, “Yeah, I think we should require it for everything.’’

“I mean, I don’t think it’s appropriate for people who are residents of Massachusetts to be on waiting lists,’’ he continued, “when people who aren’t residents and citizens are taking advantage of services.’’

Gorka said yesterday that the Pine Street Inn offers both long-term housing and emergency services and that Baker was referring only to those needing long-term assistance.

“It’s not in contradiction, or anything like that,’’ Gorka said.

Baker did not draw that distinction, however, during the initial news conference when the question was asked.

Baker did say during Tuesday’s press conference that his proposal was modeled after an immigration measure previously proposed by state Representative Jeffrey D. Perry, a Sandwich Republican. Perry’s measure, filed as an amendment to the state budget, failed when it was taken up in the House last week by a 75-82 vote.

Baker’s statements at the press conference made it sound as though he would go further than Perry, whose amendment provides exceptions to the proof of residency requirement for children and those adults needing emergency medical care, immunizations, food, and emergency housing at homeless shelters.

Perry issued his own press release yesterday, accusing Patrick of misrepresenting the issue.

“This is ridiculous and further proof that Governor Patrick is playing politics as usual,’’ Perry said in a statement.