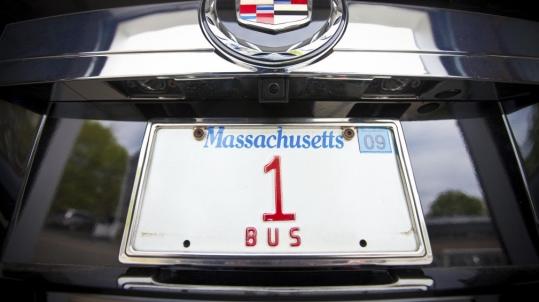 The license plate known as Bus 1 is at the center of an emotional tug of war among the Legislature, the Registry of Motor Vehicles, and Biff Michaud, whose large North Shore family founded Michaud Bus Lines in 1914. (Aram Boghosian for The Boston Globe)
By Michael Levenson Globe Staff / May 6, 2010

MARBLEHEAD — Biff Michaud lifted the door to his garage, looked at the license plate on his black Cadillac Escalade, and began to weep.

This, Michaud insisted, is not just any old tag.

In a state where drivers covet low-number plates, clamoring by the thousands for the few made available every year, Michaud’s is among the crème de la crème: He is the proud owner of the lowest possible bus license plate — “1’’ — which was passed down from his late father and which he believes is a rightful part of his family legacy.

“My dad used to say, ‘This is the single most important thing to me other than my personal health and family,’ ’’ he said, choking up.

Now, the cherished plate, known as Bus 1, is at the center of an emotional tug of war among the Legislature, the Registry of Motor Vehicles, and Michaud, the chief executive of the Salem Witch Museum, whose large North Shore family founded Michaud Bus Lines in 1914.

Registry officials suspended Bus 1 last year, after they learned it was not on a bus, as required by law, but on Michaud’s Cadillac. Then House lawmakers, prodded by Michaud’s state representative, fought back, quietly passing a bill last month that would forever designate the Bus 1 plate for Biff Michaud and permit it on any type of vehicle he chooses — bus or no bus.

State Representative John D. Keenan, a Salem Democrat who knew Michaud’s father through the Rotary Club, sponsored the legislation, which is awaiting action in the Senate Ways and Means Committee. It is one of many bills before the Legislature, derided as special favors by critics, that would change state law to benefit a single person or entity. Keenan said he sees nothing wrong with making a law for Michaud, whose father, J. Alex Michaud, was a decorated Navy commander, co-owner of the Trailways Bus Company, and longtime member of the Governor’s Highway Safety Bureau.

“I don’t care if it’s Biff Michaud or John Q. Public, I would make the same determination,’’ Keenan said. “It’s because of the history, not because of who it is, but because of the facts behind the case.’’

Registry officials strongly oppose the legislation, saying it would set a dangerous precedent for the Legislature to grant a special license plate to one driver. They say it would also be unfair to the thousands of drivers who enter the annual lottery for low-number plates. In fact, Registry officials note, the Legislature established the lottery years ago to ensure that the plates were not given to drivers because of their political connections.

“The RMV does not normally comment on pending legislation and, obviously, we have to follow the dictates of any law,’’ Registry spokeswoman Ann Dufresne said in a statement. “However, this legislation would throw the whole registration system into question.’’

The tale of Bus 1 begins in 1966, when Governor John Volpe awarded it to Michaud’s father to honor his service to the community. Michaud said the plate was more important to his father than even his World War II medals, which include a Bronze Star.

After he inherited the plate, Michaud said, he put it on a black Cadillac Fleetwood that he used to drive VIPs around Boston. Frank Sinatra, Smokey Robinson, and Willie Mays were among his passengers, he said. The Canadian racecar driver Gilles Villeneuve, he said, once looked at the Bus 1 plate and exclaimed, as he climbed in for a ride, “I feel like a king.’’

“We’ve used that for 50 years for the benefit of Massachusetts and for our community,’’ Michaud said.

It is difficult to overstate how emotional Michaud is about the plate. At night, he said, he sometimes raises the garage door just to look at it.

“This has just absolutely torn my heart out,’’ said Michaud, a burly 62-year-old with a monogrammed ring and monogrammed shirt cuffs. “I don’t have my dad. This is his badge of honor. It keeps him alive in my memory, and not having this reminds me daily that he’s dead.’’

No one ever made a fuss about the Bus 1 plate not being on a bus, he said, until two years ago when a “two-bit jealous individual’’ — whom he declined to name — called the Registry to complain.

“He brings down and dishonors my father’s memory in this way?’’ Michaud said. “It’s just appalling.’’

He recalled how months later, in late 2008, his teenage son found a letter from the Registry, warning that the plate would be suspended.

Registry officials said that after two hearings with Michaud, they had no choice but to suspend the plate. State law, they said, requires that bus plates be used only on vehicles that carry 10 passengers or more. Michaud said his Escalade fits nine. He said he would never display the Bus 1 plate as a mere showpiece, and doesn’t want to put it on an actual bus. “It would look like you’re bringing someone to the Ramada Inn,’’ he said disdainfully. “It has never been on a vehicle other than a black Cadillac.’’

State Senators Bruce E. Tarr, a Gloucester Republican, and Frederick E. Berry, a Peabody Democrat, are helping Keenan push Michaud’s bill. No one in the Legislature has expressed opposition, Keenan said. But Michaud is deeply worried. He said his drive to reinstate Bus 1 is finally “on the 2-yard line’’ — so close but still not there.

“It is my dad,’’ he said, pointing at the plate. “Everybody knows it’s my dad. And I just hope the Legislature understands that.’’

See what cars were recovered from thieves most often.
Your comment is subject to the rules of our Posting Policy
This comment may appear on your public profile. Public Profile FAQ