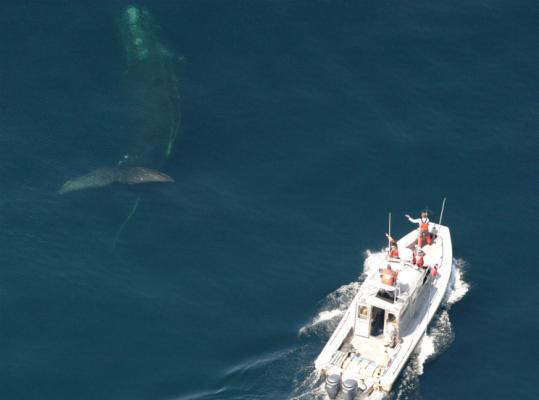 This image taken with NOAA permit 774-1875 approached the right whale under permit 932-1905 to disentangle it. (Northeast Fisheries Science Center)
By Stefanie Geisler Globe Correspondent / May 5, 2010

Over the weekend, a team with the Provincetown Center for Coastal Studies used a unique new technique to free a right whale from a rope that ensnared its upper jaw.

Using a crossbow, the team cut the rope by shooting an arrow with four razor blades on its tip Saturday, said Scott Landry, director of the Marine Animal Entanglement Response Team. The whale was not injured.

“We did this because this species is notorious for two things: having wraps around their upper jaw, and being very evasive,’’ Landry said. “They really do not like to be approached. That makes disentanglement very difficult.’’

A stopper was placed below the tip to prevent it from going into the whale, Landry said.

The whale, a female nicknamed Wart, had a dangerous problem — rope wrapped around her upper jaw and zigzagged through her baleen plates, which filter food particles from water.

The team had tried to free Wart several times, and time was a factor, Landry said. The rope may have led to deadly infection.

The team’s disentanglement success rate for humpback whales is about 90 percent, Landry said. For right whales, it is about 50 percent because the animals are so evasive.

Wart was first seen with long lengths of rope trailing alongside her in March 2008. At that time, however, the rope was only in her baleen and had not wrapped around her jaw.

Some whales can live for months or even years with that type of entanglement, Landry said. It becomes dangerous when a body part is ensnared.

In January, the whale was spotted again. This time, the rope was wrapped around her jaw.

“That’s when we realized, ‘OK, intervention is absolutely necessary,’ ’’ Landry said. “Entanglements can kill a whale over time by cutting into the whale and introducing infection. We’ve seen quite a few right whales die of exactly this kind of entanglement.’’

But the seas were rough, and the whale was far from shore, Landry said. An intervention had to wait until the whale was spotted again.

That spotting came Saturday in the Great South Channel off Cape Cod.

Working under federal permit, Landry and his crew were able to get within 40 feet of Wart.

When Wart finally surfaced to take a breath, Landry knew he had just one second before she dove back underwater. He also had just one try.

“Truth be told, it was very difficult,’’ Landry said. “It all happened very quickly.’’

Landry shot the arrow. It zipped through the air, and one of the blades cut straight through the rope wrapping around the whale’s jaw.

Wart was not touched and did not seem to realize anything had happened, Landry said. But when she came back up from her next dive, she began opening and closing her mouth.

“She definitely noticed something had changed,’’ Landry said. “She had already begun to work the rest of the entanglement out on her own.’’

At about 2 p.m. yesterday, an aerial survey team spotted a right whale they believe was Wart, Landry said. She had no rope around her jaw or in her baleen.