Raps state for not banning texting 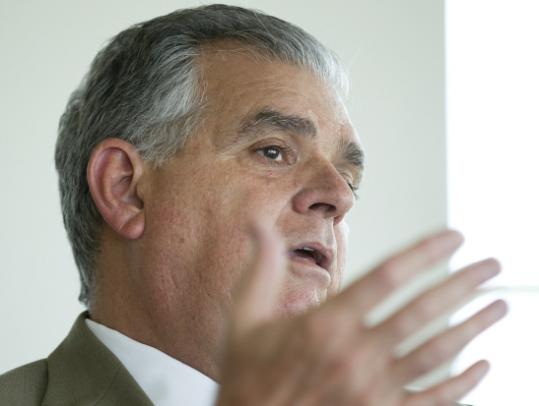 Ray LaHood, US transportation chief, speaking to a gathering of students, academics, and entrepreneurs at MIT, said, “These things can change, but it takes the people getting fired up about it.’’ (Yoon S. Byun/ Globe Staff)
By Eric Moskowitz Globe Staff / May 4, 2010

CAMBRIDGE — The nation’s top transportation official yesterday chastised Beacon Hill lawmakers for not moving faster to ban texting and handheld cellphone use while driving, calling such distractions “a deadly epidemic’’ and “the least-recognized public safety crisis of the 21st century.’’

With a safe-driving bill again in limbo at the State House, US Transportation Secretary Ray LaHood implored lawmakers to act to prevent more tragedies behind the wheel.

LaHood, speaking to a gathering of students, academics, and entrepreneurs at MIT, said, “These things can change, but it takes the people getting fired up about it.’’

State legislators have debated such measures for more than six years. The House and Senate passed separate versions of a bill earlier this year but have yet to work out their differences. Legislative leaders and advocates say they are optimistic that a deal may be reached by this summer.

State Senator Steven A. Baddour, Senate chairman of the Joint Transportation Committee, said that House and Senate negotiators had been working diligently and that he was “cautiously optimistic’’ about a resolution in the next few months.

“What we need to make sure that we do is pass a law that has the desired impact that we want it to have,’’ said Baddour, Democrat of Methuen.

LaHood, who was at MIT to promote innovation in transportation technology, encouraged the public to become more energized about the issue in the 26 states that have not passed a texting ban and the 44 without hands-free cellphone requirements.

In Massachusetts, the legislation has been hung up over whether texting alone should be banned or if such a ban should be coupled with a hands-free calling and dialing requirement. The bill has also been slowed by debate over how to screen and test senior citizens seeking to renew licenses, with the two issues packaged in the same legislation.

Both the House and Senate agree that drivers under 18 should not be allowed to text or talk, hands-free or otherwise, and that teenagers who do should have their licenses suspended. The version that passed the House in February would also require a hands-free device for drivers over 18 when dialing and talking and impose regular vision tests for drivers over 75.

But the hands-free measure failed in the Senate a few weeks later by an 18-to-16 vote. The Senate version, meanwhile, sought to impose stricter screening for older drivers, including physical and mental tests.

State Representative Joseph F. Wagner, House chairman for the Joint Transportation Committee, said police would have a difficult time distinguishing between texters and dialers without a handheld ban.

“If people are allowed to hold cellphones, then determining whether or not someone is texting is going to be a difficult thing,’’ he said.

The Chicopee Democrat is hopeful both sides will reach an agreement by the summer.

Jeff Larson, head of a Massachusetts nonprofit that promotes safer driving, said yesterday that he is concerned the bill would not be resolved before lawmakers break for the summer.

“Is there influence that can be brought?’’ Larson, president of Safe Roads Alliance, asked LaHood yesterday.

“These people are elected, but I’m happy to talk to anybody about this,’’ LaHood said. “I feel very passionate about it.’’

State Senator Mark C. Montigny, a New Bedford Democrat who has proposed multiple distracted-driving measures since 2004, is also optimistic. But Montigny said he remains “really, deeply frustrated.’’ “I’m confounded by the holdup,’’ he said. “This is a simple thing we could have done six years ago and saved many, many lives.’’

The casualties in that time frame included Jordan Cibley, a Foxborough teenager who died three years ago after his car struck a tree, apparently after he removed his seat belt to retrieve a dropped cellphone while talking and driving.

Jerry Cibley, who was speaking with his son on the phone at the time of the crash, appeared with LaHood yesterday.

“When we were on the phone minutes before he was killed, we were not talking about anything of consequence,’’ said Cibley, now an advocate for safer driving. “As a matter of fact, the conversation was, ‘How could you forget to drop the Sunday paper off?’ ’’