In Patrick’s response, risk and opportunity 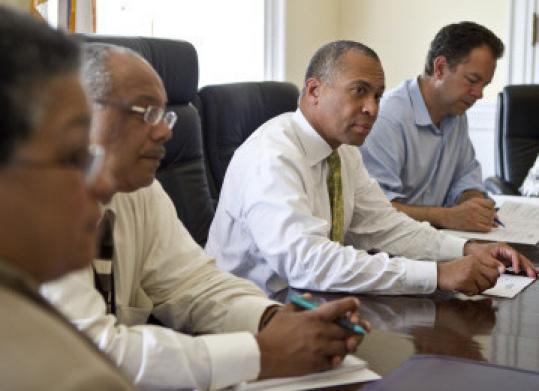 Governor Deval Patrick led a Cabinet-level briefing on the water crisis yesterday in his State House office. (Aram Boghosian for The Boston Globe)
By Brian C. Mooney Globe Staff / May 4, 2010

In any campaign for reelection, there are certain events a governor can foresee. A catastrophic rupture in a pipe carrying potable water to 2 million constituents is not one of them.

Governor Deval Patrick has been highly visible since the failure of a massive water pipe in Weston Saturday morning. Yesterday, just hours before he was scheduled to leave, his office announced that the governor had canceled his trip to the Biotechnology Industry Organization convention in Chicago. Instead, he will remain in the state until drinkable water is restored in 30 communities served by the Massachusetts Water Resources Authority, his office said.

The governor did not create the crisis, nor was he even in office when the tunnel project was completed. But he owns the problem now, for better or worse.

There may be instructive lessons in how some of his predecessors reacted to disasters on their watch — Mitt Romney taking control when falling ceiling panels killed a car passenger in a Big Dig tunnel in 2006; William Weld blithely jetting off to a political meeting in California the day after a fatal tornado tore through Berkshire County in 1995; Michael Dukakis becoming a reassuring television presence during the Blizzard of ’78.

The situation poses risks for Patrick if he and his administration fumble the response or if the problem drags on for days. It also offers an opportunity, however, providing a wealth of so-called earned media coverage that candidates covet.

Yesterday, in at least his fourth press conference in three days, Patrick sought to be both a voice of perspective and reassurance.

“We want to take the time to make sure we do this right,’’ he said, adding that he wanted the public to have confidence in the water system again.

In addition to canceling his trip to Chicago, Patrick also pulled out of a gathering of about 500 Democratic activists Saturday night on Cape Cod and called in to convey his regrets. After visiting the Weston site early Sunday, he attended a pair of political events on the North Shore and then made his second visit to the Massachusetts Emergency Management Agency command bunker in Framingham, where his Cabinet assembled.

The MWRA is an independent agency, but the Patrick administration has assumed control of the response, including a public information outreach on matters of public health, safety, and environmental concerns and coordinating with the federal government.

Bay Staters expect their governors to take charge in times of crisis, so the benefit of stepping up can be fleeting, one longtime observer said.

“There is not a lot of political gain to be achieved by sticking around during a crisis, but there is a risk for some political cost should the governor not be around,’’ said Paul Watanabe, professor of political science at the University of Massachusetts Boston.

Disasters, natural and man-made, can occur at any time, of course, and it is difficult to predict what the public response and political fallout, if any, will be.

In July 2006, with the public shocked and afraid to drive in Big Dig tunnels after faulty ceiling panels crushed Milena Del Valle, Romney seized control of the response from the Massachusetts Turnpike Authority, which was responsible for the structure. The lame-duck governor was a commanding presence, memorably wagging his finger at Turnpike Authority chairman Matthew Amorello in a confrontation on camera near the accident site, demonstrating detailed knowledge of the construction flaws, and pledging a “stem to stern’’ safety review of the tunnels. At the time, Romney had been lambasted for his chronic absenteeism from the state as he traveled the country laying the groundwork for his eventual presidential campaign.

Eleven years earlier, Weld was roundly criticized for leaving the state after a tornado ripped through three Western Massachusetts towns, killing three, injuring 29, and causing about $25 million in damage to hundreds of buildings. Instead of touring the site and leading the response effort, he sent Paul Cellucci, his lieutenant governor, and left for a political strategy meeting in California to plot the presidential campaign of then-governor Pete Wilson. In his losing challenge to Senator John Kerry the following year, Weld was trounced in Berkshire County, where he had run strongly in two previous campaigns for governor.

If there is a lesson in the Dukakis performance after the historic blizzard that dumped nearly 3 feet of snow and paralyzed the region for days in 1978, it is that voters have short memories about disaster response if other matters are foremost on their minds.

Dukakis won rave reviews for the calming effect of his ubiquitous sweater-clad presence during television news coverage. Nine months later, however, he was unceremoniously ousted in the Democratic primary by Edward J. King, who ran on a tax-cutting platform.

Noah Bierman of the Globe staff contributed to this report.