THIS STORY HAS BEEN FORMATTED FOR EASY PRINTING
WATER SUPPLIES 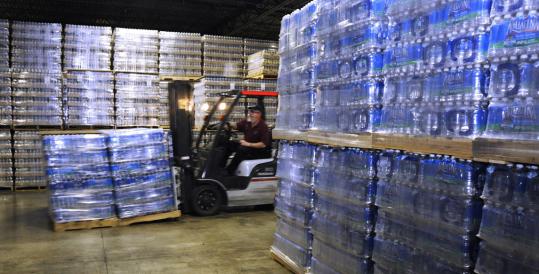 At CPF Co-Op in Ayer yesterday, a forklift moved pallets of Aquafina bottled water through the warehouse to the truck waiting to take them to communities hit by the boil-water order. (Mark Wilson for The Boston Globe)
By Megan Woolhouse Globe Staff / May 4, 2010

When state emergency management officials called CPF Saturday, asking for help, the company, one of the biggest bottlers in the Northeast, kicked into high gear.

CPF would not give specific numbers other than to say that production of Aquafina water, a purified form of Ayer’s municipal water, has been ramped up to six times its normal level.

State officials went to CPF and a handful of other water bottlers across the region Saturday, trying to get 2.5 million gallons of bottled water to residents, or about a gallon a day during the crunch.

Webster said CPF sold the water to the state at wholesale, but did not disclose the price. Peter Judge, a spokesman for the Massachusetts Emergency Management Agency, said the state has not yet calculated the final cost to purchase the water, but that the state contracted with CPF and other companies, agreeing to pay $4.99 or $5.99 per case.

State officials decided to dole out bottled water because it offered fewer health hazards than using tankers to carry water into communities. People have to bring their own containers in those situations, Judge said, which may not be clean.

“It’s a sanitary thing,’’ Judge said. “It’s more expensive, but at least we’re not concerned about anybody contracting illness.’’

The town of Ayer is located 35 miles northwest of Boston and is not part of the MWRA system.

CPF has been working at top capacity since Sunday with a military-style efficiency; the plant manager is a former Navy Seal and Webster is a Marine Corps special operations veteran. Workers began loading pallets of water onto distributors’ trucks Saturday night. National Guard trucks began arriving at the facility’s docking area on Sunday afternoon.

The rush to get bottled water out the door was not unfamiliar to many CPF employees, including those who had undertaken similar efforts after the Sept. 11, 2001, terrorist attacks and several hurricane emergencies in the South.

However, Saturday’s crisis was the first time the company responded to a shortage in Massachusetts.

More than 25 employees were called into work Sunday, when production is typically slower. They needed to clean and sanitize lines normally used to bottle other beverages, like or Grape Crush, so they could be used for water. Distribution schedules also had to be orchestrated.

The state has asked the company for “a couple of hundred thousand’’ cases of Aquafina, or as much as they can produce, Webster said.

CPF employs 160 people, and the entire operation spans nearly 700,000 square feet. The only constraint, Webster said, is how much purified town water it can process in a day. The company sells Pepsi products to distributors across New England and New York City’s five boroughs.

To make Aquafina, the company pipes in Ayer municipal water and measures its purity, including how many “heavy solids’’ and other contaminants it contains. The water then goes through several purifying and filtration processes. According to Webster, most of the municipal water contains 250-280 parts per million “dissolved solids,’’ or contaminants. By the time it is shipped as Aquafina, it contains five parts per million.

“We break it down to nothing,’’ Webster said of the water.

A digital ticker in the plant near one of the Aquafina production lines keeps employees and Webster in tune with the day’s massive output. Before noon yesterday, the company had bottled 2,475 cases. Plant manager Parker Glasier said that by the end of the day, the number would grow to 18,000.

“We think about it and just go to it,’’ Glasier said.