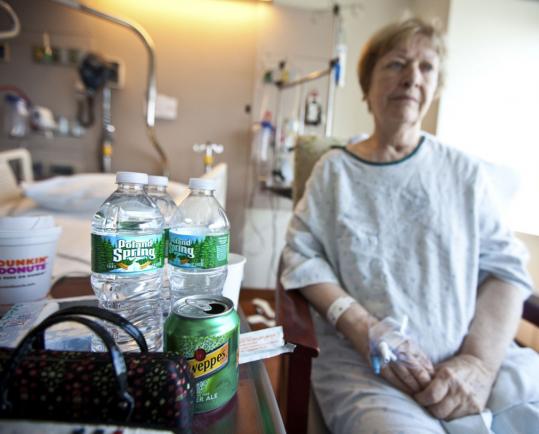 Marilyn Hassett, 76, was given bottled water while recovering from knee surgery at Massachusetts General Hospital. Her family also brought her a cup of coffee yesterday. (Aram Boghosian for The Boston Globe)
By Patricia Wen Globe Staff / May 3, 2010

Dawn Tenney planned to spend yesterday sprucing up her garden. Instead, the 58-year-old associate chief nurse of Massachusetts General Hospital was at work, worrying about the Custom Ultrasonic — a dishwasher-like machine that disinfects diagnostic instruments.

The problem, she was told, was that the machine uses tap water that is heated to 109 degrees — not nearly high enough to kill all the germs, as required by the hospital’s newly imposed sanitation rules for dealing with Greater Boston’s water crisis.

The result: A “DO NOT USE’’ sign was quickly scrawled in black marker and taped on the machine.

As the water emergency enters its third day, few places were as susceptible to potential trouble as hospitals, where sanitation is always an urgent priority. And few have as massive a challenge as Mass. General, the city’s largest hospital.

The mood at the hospital yesterday was one of calm adaptation, not chaotic alarm. The business of the hospital went on, but in some cases more slowly, as staff and patients struggled to avoid using tap water.

Still, surgeries went ahead as scheduled. Doctors made their rounds. Ambulances arrived with patients. The fact that the emergency broke out on a weekend, when hospital activity is lower, gave administrators more time to devise a plan to avoid tap water and ice, one that they are prepared to keep in place for as long as the crisis takes.

Hand-washing is usually a vital ally in the fight to protect patients from infections, but faucets and sinks were covered yesterday with signs prohibiting their use. Tap water was now the enemy. The danger, from bacteria that could be in the water, was especially serious for the many patients whose immune systems had been weakened by disease.

Yesterday morning began with a meeting of the hospital’s Incident Command System, attended by more than a dozen top supervisors, including Tenney, who oversee everything from operating rooms and food services to the emergency room and housekeeping.

Jeanette Ives Erickson, senior vice president of patient care and chief nurse, was incident commander for the day. The hospital, she emphasized to her colleagues, had 21,408 bottles of water and juice stockpiled, and a huge shipment was on the way. But she said staff workers also needed to focus on the less obvious ways that people might be affected. Many patients, for example, have been given “bath-in-a-bag’’ towelettes to avoid using showers.

The supervisors discussed how to keep unsafe water from coming into contact with sterilized medical instruments. Dr. Jean Elrick received reassurances that the purified water used in dialysis procedures was safe, and no changes were needed.

After the meeting, Tenney headed for the surgical unit to check on the Custom Ultrasonic. Workers will now have to clean flexible diagnostic probes, among other tools, using a new machine. That device, which takes slightly longer than the other machine, avoids tap water and uses hydrogen peroxide, said Tenney, who remained at the hospital throughout the day.

In the basement, several large 60-gallon vats were boiling water, which was to be cooled and later used for food preparation, including washing salads or mixing with soups. But there was no water for coffee, much to the dismay of sleep-deprived employees. Even the popular “Coffee Central’’ cafe had no coffee.

Marilyn Hassett, a 76-year-old patient from Scituate who just had knee replacement surgery, knew she was among the lucky to have enjoyed a cup of coffee — brought by her family from a Dunkin’ Donuts in Weymouth, unaffected by the water emergency. Meanwhile, she said she has had an abundance of bottled water, soda, and juice provided by the hospital.

“They compensated,’’ she said of the staff.

At the morning meeting, Erickson had wondered aloud whether she should try to keep down the number of hospitalized patients to avoid straining resources. With 96 patients scheduled to be transferred to Mass. General by this morning — and typically an equal number hospitalized daily on an emergency basis — Erickson considered diverting nonurgent cases; however, by the afternoon, she concluded that the hospital could accommodate all scheduled transfers.

The task of informing all of the hospital system’s 22,000 staffers about new sanitation standards is far-reaching. MGH employees are spread among more than a dozen health clinics and research labs that go beyond the main Boston campus. A number of surgeries are conducted in off-site locations outside Boston, and supervisors emphasized that all nurses and medical staff should be using a special kind of foam to wash their hands, and avoiding any final contact with tap water before procedures. Supervisors talked about the need to deliver this new foam to all of the Mass. General facilities — but preserve resources.

The hospital’s location in Danvers, in a community unaffected by the water emergency, will not get extra foam.

Officials had to ensure the safety of animals in experiments, too, under government regulations. Tap water was an issue, even in the safe nourishment of lab mice.

For one employee who grew up in the Dominican Republic, Victor Mata, the adjustments made this weekend reminded him of day-to-day life in his native land, and many other parts of the world, where ordinary people do not expect safe drinking water.