THIS STORY HAS BEEN FORMATTED FOR EASY PRINTING
CAFFEINE CUTOFF 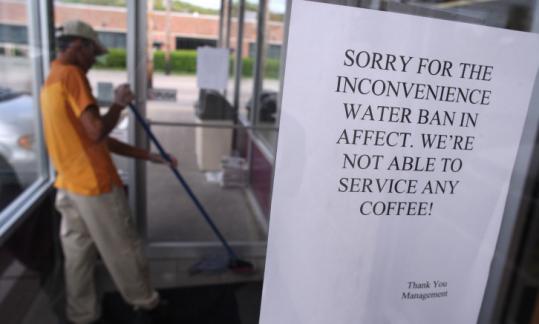 A sign on the door at a Dunkin’ Donuts store in Newton yesterday gave coffee-seeking customers some bad news. (Bill Greene/ Globe Staff)
By Michael Corcoran Globe Correspondent / May 3, 2010

Dunkin’ Donuts, one of the largest coffee retailers in the country, stopped serving coffee in areas affected by the water break yesterday. Customers were greeted by signs on the entrances that said: “We are not offering hot or cold coffee products until further notice.’’ Dunkin’ Donuts was pushing Coolattas, a frozen coffee drink.

And many independent retailers also cut off the flow of joe, leaving groggy brunchers yesterday searching for other sources of caffeine.

At Flour Bakery and Café in Boston’s South End, a sign on the door warned diners that no coffee was available because of the water crisis. Across Washington Street, at Code Ten, salads and coffee were both off the menu.

Amrita Bajwa, a medical student from Boston, sat outside Code Ten with a friend, sipping from a bottle of water.

“I tried to get an iced chai tea from Flour, but had to settle for something else,’’ she said.

Judith Connelly, of Malden, was staring at the sign outside the Dunkin’ Donuts on Summer Street, in downtown Boston, and said she had been “looking all day for her daily cup of coffee,’’ and had not yet found one. Her preferred shop, , had also shut down its coffee sales in affected stores, and only offered bottled drinks and food.

There were options to be found, and different stores reached different conclusions about whether coffee is hot enough to qualify as drinkable. It is not; water must be boiled for a minute, which does not happen in a coffeemaker.

A 7-Eleven on Morrissey Boulevard in Dorchester was not selling fountain drinks, but was offering coffee. “It is already hot,’’ a clerk argued. But a 7-Eleven in Downtown Crossing decided otherwise, and cut off its coffee.

Aroa Fine Chocolate in the South End kept coffee on the menu. An employee said the shop used prepackaged ice and spring water for iced coffee, and relied on the fact that the hot coffee was heated.

Some consumers were taking no chances. “I think I will pass on the boiled tap water,’’ Connelly said. And Edgar Galicia, a gas station worker in Dorchester, said he skipped his morning cup of coffee because he was “worried about getting sick.’’

The coffee conundrum has become a challenge for many retailers and businesses. Roger Berkowitz, chief executive of Legal Sea Foods, said making coffee in bulk has been “the most challenging’’ issue for the chain’s restaurants, because not all prepare the drink at boiling temperatures.

“It is terrible for business,’’ said Lauren Krakauskas, an employee at Espresso Royale Caffe on Newbury Street, which shut down its espresso machines yesterday. “All we have to sell is orange juice.’’