City becomes an oasis for those in search of untainted taps 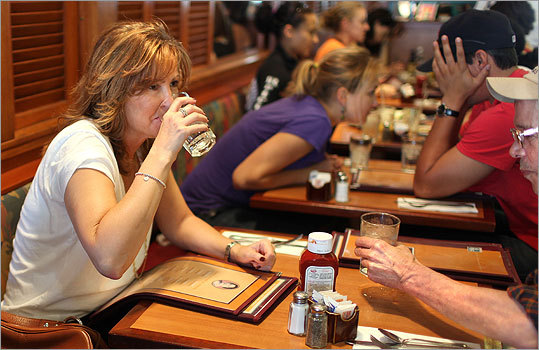 (Pat Greenhouse / Globe Staff) Customers of S & S Restaurant in Cambridge enjoyed filtered tap water with their meals yesterday, a rarity in the region this weekend.
By David Abel Globe Staff / May 3, 2010

CAMBRIDGE — Under a hot sun, the glimmering water lapping on the banks of Fresh Pond yesterday looked even more like an urban oasis than it usually does to Jean Rogers, a municipal park ranger who patrols the reservoir that provides drinking water to the city’s 105,000 residents.

If Cantabrigians see themselves as living on something of their own island, Rogers and other residents yesterday had a good reason: With millions of others in the metropolitan area having to boil water, Cambridge was one of the few municipalities where residents could drink safely from the tap.

Rogers took pride telling residents they were free to use local water fountains.

“We’re just lucky that officials a century ago planned for this and made the necessary investments,’’ she said, pointing out that nine years ago, the city spent about $80 million to build a new treatment plant that filters 14 million gallons of water every day.

With their water unaffected by the burst pipe in Weston that left 29 communities in Greater Boston without safe drinking water, Cambridge attracted lots of people from out of town, whether to shower at a friend’s apartment, fill or buy jugs of water, or sip ice-filled tap water at local restaurants.

Every table was taken early in the afternoon at 1369 Coffee House in Inman Square, where Steve Singer, the longtime manager, scrawled a note on the door that read: “Our Water is Good! (Separate Water Source.)’’

He said he had received about 25 calls from customers who asked whether the cafe was open.

“Today’s the busiest Sunday I’ve ever seen,’’ said Singer, describing the iced coffee as “liquid gold.’’ A lot of customers came from Medford and Somerville, he said.

State officials issued boil-water alerts for the affected communities on Saturday, but it took a while for many Cambridge residents to realize they were exempt.

Yann Benetreau decided to drink beer instead of water on Saturday. He also went to a 7-11 in Central Square to buy bottled water, where a clerk told him — inaccurately — that it wasn’t safe to drink the Cambridge water.

“We thought it was better not to take any risks,’’ said Benetreau, 29, a Boston University graduate student who spent the afternoon drinking an ice-filled glass of at Bukowski Tavern in Inman Square.

Across the street at S&S Restaurant, which received about 100 calls to see if the deli was open, waiters served tall glasses of the city’s tap water to more than 2,000 people who came for brunch.

Julie Short drove up for brunch from Quincy, where she said not even was selling coffee. The night before, she boiled water to brush her teeth and give to her dog.

“I noticed Cambridge wasn’t on the list of affected cities, so we decided to come here,’’ said Short as she sipped a mimosa. “There was no way were going to have brunch in Quincy.’’

Rebecca Brigham said her parents, who live in Cambridge, filled eight gallons of water jugs for her to take back to her apartment in the South End. She and her boyfriend were mulling whether to use their camping filter and put up their tent in their living room.

“This feels like camping,’’ said Brigham, who came with a friend to S&S after hearing it was safe to dine in Cambridge.

The city has had its own supply of water since 1889, when officials built a system of pipes to divert water from Hobbs Brook and Stony Brook, which stretch from Lexington to Weston.

The city relies on the Massachusetts Water Resources Authority for its backup supply, which officials last used in February 2004 when a water main cracked in Kendall Square.

“What happened this weekend certainly makes us feel better about having an independent water system,’’ said Sam Corda, managing director of the Cambridge Water Department, noting that water costs residents about three-quarters of what they would pay if they used the MWRA.

“We also ensure our water is clean, because we filter it, unlike the MWRA,’’ he added.