More than a number 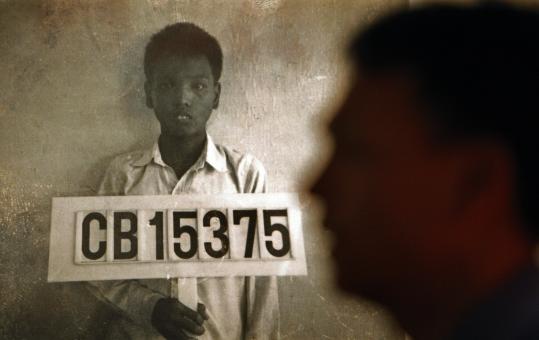 Sayon Soeun, executive director of Light of Cambodian Children Inc., in the exhibit room. In the background is a photograph of him in Cambodia as a child. (Jim Davis/ Globe Staff)
By Wendy Killeen Globe Correspondent / May 2, 2010

After years of suffering that followed the Khmer Rouge takeover of Cambodia in 1975, including time in labor and refugee camps, he received his transit number, meaning he was approved for emigration to a new country.

Kret, then 26, arrived in the United States on Thanksgiving Day in 1981.

His story is similar to those of about 150,000 other Cambodian refugees admitted to the United States between 1979 and 1985, many of whom settled around Lowell. They are stories that Kret, a human services coordinator in the Lowell office of the state’s Department of Developmental Services, feels compelled to share.

“By understanding the past, we raise more awareness and become more sensitive about the whole experience of the refugee,’’ said Kret, 55, of Chelmsford. “We don’t want to repeat history. If we all pay attention, we can make a change for world peace.’’

Kret’s vision has resulted in the exhibition “More Than a Number,’’ which opened at the American Textile History Museum in Lowell on April 17, the 35th anniversary of the Khmer Rouge takeover. It includes photos of people holding their transit numbers, which were used to document the refugees leaving the holding centers, as well as the stories of local Cambodian refugees. The display runs through July 25.

Kret said the exhibition, about 2 1/2 years in the planning, is the first of its kind in the world. There are plans to show it elsewhere around the country and the world over the next five years.

The goal is to portray the refugees as heroes rather than victims, said Sayon Soeun, executive director of Light of Cambodian Children, which produced “More Than a Number.’’

“Refugees endured,’’ said Soeun, who came to the United States in 1983 at age 14. “They had to sacrifice a lot to raise their children and come to the US and contribute to rebuilding the community.’’

Soeun said until Kret mentioned the transit number photos, he hadn’t thought much about them. “I might have seen a weird photo I had,’’ he said. “I didn’t know what it was.’’

Soeun, who conducted most of the interviews with the refugees, said collecting the transit photos was a challenge.

“Most people had lost theirs,’’ he said. “They had moved multiple times or when they became a citizen [the numbers] were taken away because they had no more use.’’

The exhibit includes 48 photographs of families and individuals, with 69 refugees represented.

“We want to honor and celebrate the survivors,’’ said Sopheap Theam, 30, who worked on the project, including interviewing her mother, Sao Eath of Lowell.

“A lot of the stories I was shocked about,’’ said Theam, who was 4 years old when the family immigrated in 1984. “I have no recollection of anything that happened. . . . The younger people can’t remember and the elders are the most traumatized.’’

Kret agreed. “After 35 years, a lot of refugees are reticent to discuss any type of experience with their children,’’ he said. “They don’t want to rediscover it.’’

But, Soeun said, “It’s important for the older generation and the younger generation to open some dialogue. It’s something we want to promote so they better understand what their parents have gone through.’’

The horror of the genocide is told in the survivors’ stories, in English and Khmer, mounted with their enlarged photographs.

It is artistically portrayed in a weaving by Rachel Faller that includes portraits of executed prisoners at Tuol Sleng Prison.

She made the two pieces, one 22 feet long, the other 17 feet, by weaving Cambodian raw silk and creating the portraits with dye.

Faller, 23, who is from Burlington, has lived in Cambodia for two years after receiving a Fulbright Scholarship from the Maryland Institute of Art. She runs a business helping HIV-positive women design and make clothing.

She said the Khmer Rouge tried to make the Cambodians feel insignificant by using metaphors, such as: “Each person is one thread in a cloth, and if you remove it, it doesn’t matter.’’

“But, actually, if you are a weaver, you know that each thread is really important,’’ said Faller, who came to Lowell for the opening of the exhibit. “I am trying to make a comparison between each individual thread and the whole. Each life is very important.’’

She liked the idea of juxtaposing her piece portraying the victims with the photographs of the survivors.

“When a lot of people think of Cambodia, they think only of the genocide. They don’t know what is going on in Cambodia today,’’ Faller said. “I am glad to see the exhibit is showing a progression from 1975 until now, and that people are doing positive things and moving forward with their lives.’’