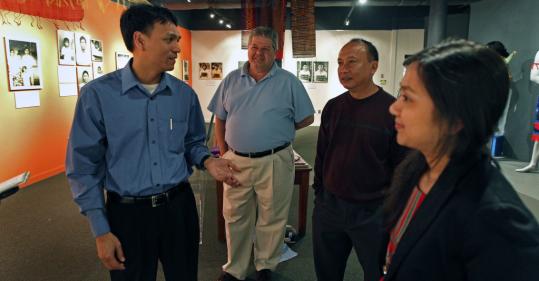 Sayoun Soeun, 42, Lowell
‘‘I was separated from my family in 1973 or early 1974. I was about 6 years old. I remember seeing 30 to 40 kids on a military truck and thought it wouldn’t hurt to ride along. I expected to return home before sunset. I ended up in a place with lots of children. More trucks full of children arrived, while other children-filled trucks were leaving. I thought they were on their way back home. I decided to stay at the camp for one night or so. A day became a week, weeks became months, and months became years. I never did return home, nor see any of my relatives again.

I remember being punished for giving a potato to an elder worker at the camp. They made me work like an animal. I was a lonely 7-year-old working with hundreds and thousands of strangers. Between 5 a.m. and midnight, I was given only one or two meals.

It was my first experience seeing people die from starvation, illness, and executions. I was terrified and afraid.’’

Kowith Kret, 55, Chelmsford
April 17, 1975, was the day the Khmer Rouge overthrew the Republican regime and took power in Cambodia. I witnessed firsthand the overnight plunge of a peaceful Cambodia into the abyss as the country was dragged into hell. My family and other innocent Khmer people were forced to the countryside and put in the concentration camps to perform hard labor in the rice fields. I remember the brutality of the KR army and civil servants. About 2 million people were killed through execution, starvation, and forced labor as the ultra-Communist regime attempted to create an agrarian utopia while erasing the history and memory of a people.

Many times I suffered from sleep deprivation, starvation, forced labor, and poor health. I had to sneak out at night while other people slept, to find insects, vegetables, and other edible food to supplement the meager daily ration. Several times, I was tortured and physically abused by the KR camp leader because I was collecting food from my own garden without his permission. I was very ill many times and required hospitalization for fatigue and critical health problems.

I learned how to lie, manipulate, and steal in order to preserve my life. I endured this catastrophic experience for four years. But I survived . . .

The KR took away my life, language, values, and dignity. I never dreamed, not even once, during this cruel period. I lost my parents, siblings, relatives, and friends (in total 65 people), but I reserved the fondest memories of my life from prior to 1975.

Sok Im, 67, Lowell
The Khmer Rouge forced my family [my wife and four children] out of Phnom Penh in 1975, and we went to live in Takeo. In 1976, the Angkar moved us to Battambang.

My wife gave birth to another daughter in 1977. My wife died because she was sick and we had no medicine. Shortly after, my newborn daughter died because her mother was no longer there to nurse her. I was left as a single parent for my remaining four children.

One day, after returning from working for the Angkar, I found my children pale, starving, and spiritless. I decided to leave with them and face death — determined that dying was better than suffering.

Sao Eath, 55, Lowell
At Sre Antak, there was no rice for us, so I had to be a master thief. We were only given 30 kernels of corn per meal, two meals a day.

I went to steal corn in the fields and stepped all over bones and skeletons. One bony arm grabbed my food. However, I wasn’t scared because I was so hungry. I could have eaten the whole corpse! In the middle of the night, I went out to the mass graves and stole anything I could find to eat.