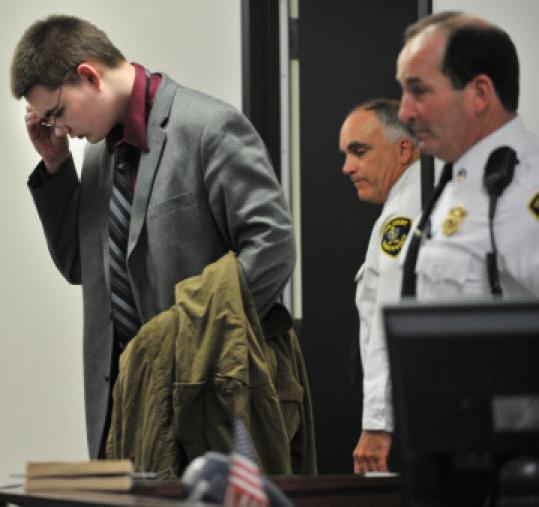 WOBURN — A Middlesex Superior Court jury yesterday began deliberating the fate of a teenager who was described as both a methodic murderer and a student whose mental sickness drove him to kill, punctuating a high-profile three-week trial that raised questions about the treatment of mental illness in schools and in the courts.

John Odgren, now 19, showed no emotion as the jury of seven women and five men began deliberating just before 4 p.m., following an afternoon of dramatic closing statements. The jurors ended their deliberations for the day an hour later and will resume today.

Defense attorney Jonathan Shapiro urged jurors to consider the teenager’s lifetime of mental illness and find him not criminally responsible, by reason of insanity, in the stabbing of student James Alenson in a bathroom at Lincoln-Sudbury Regional High School three years ago.

But Dan Bennett, assistant Middlesex district attorney, called Odgren a calculating killer who thought he was planning the perfect murder, only to see Alenson stumble out of the bathroom and spoil his plans for escape. It was then that Odgren showed regret for his actions, Bennett said.

In a trial that focused mainly on Odgren and his history of mental disorders, Bennett’s description of Alenson in his dying moments painted a poignant picture of a 15-year-old who stumbled as he desperately sought help after suffering stab wounds to his liver, lung, and heart.

“There’s something inside a human being that doesn’t want to give up on life,’’ Bennett said. “It’s not here,’’ he said, choking up and pointing to his head. “It’s in your stomach, and it was in James Alenson.’’

The freshman did not have the build of a football player, and he was not a boxer or a soldier, Bennett said, but “he was a person who was tough enough to keep fighting. He wasn’t going to go down in that bathroom.’’

Alenson was pronounced dead at a Concord hospital. Alenson’s parents were in the courtroom yesterday.

Odgren, a 16-year-old special needs student at the time of the killing, faces life in prison. If the jury finds him not guilty by reason of insanity, he will be sent to a state psychiatric hospital and will not be released until a judge decides he would not be a threat to the public.

During more than two weeks of testimony, jurors heard from school officials and students who knew Odgren and came upon the crime scene, from police officials who interviewed the teenager, and from mental health officials who recounted his medical and academic history. Three mental health specialists testified for the defense that he was legally insane at the time of the killing, but one psychiatrist testified for prosecutors that Odgren was aware of the consequences of his actions.

No one disputed that Odgren stabbed Alenson or that he suffers from mood disorders, depression, anxiety, and Asperger’s disorder, a form of autism and a neurological condition that causes one to lack the social and emotional skills to interact properly with others.

But whether he knew what he was doing and whether he had the ability to control himself — the guidelines in criminal responsibility — will be at issue in jury deliberations.

The case has raised questions about the management of the mentally ill in the courts and in the schools. Odgren’s lawyers were rebuffed by the judge in their attempts to explain to jurors that Odgren would probably face years in psychiatric care and that he would not be released soon if they find him not criminally responsible. Jurors are historically reluctant to find defendants not guilty by reason of insanity.

Meanwhile, Alenson’s parents have sued the coordinator of Odgren’s special needs program for allowing him to attend Lincoln-Sudbury in spite of a history of assaults.

Bennett told jurors that Odgren was fixated on violence and that the stabbing of Alenson played out just like the “perfect murder’’ he had earlier spoken about in forensic science class: He would stab a stranger in an isolated place.

He said that Odgren studied the school to determine the best exits and that he had visited one other bathroom the morning of the killing hoping someone would be there. When no one was, he went to another bathroom and encountered Alenson.

Odgren’s lawyers and mental health professionals said he suffered a lifetime of harassment and bullying because of his illnesses, which caused him to be fearful and anxious. At just 9 years old, he spoke of killing himself and later said his mind buzzed “like a million bees.’’

Like other Asperger’s patients, he regressed into a fantasy “world of his own making,’’ Shapiro said, only this world was based on the violent stories he read, including the Stephen King series “The Dark Tower.’’

Painting his own portrait of a troubled teenager, Shapiro recalled how as a grade-schooler Odgren told a psychiatrist that his three wishes were to win a million dollars, have a lifetime supply of junk food, and to stop being bullied.