Some pro athletes push for passage 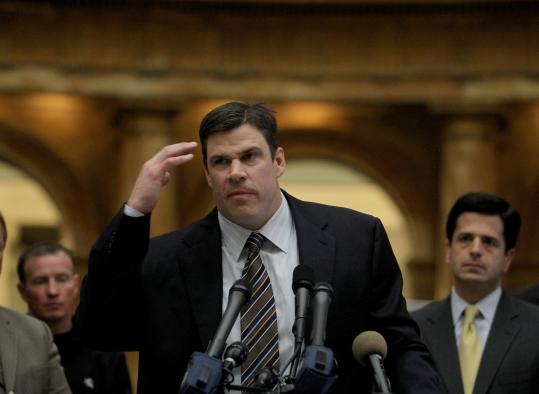 With new medical research showing that successive concussions can have an increasingly damaging effect on the brain, state lawmakers are pushing a bill that would limit how soon a student athlete can return to playing after suffering a blow to the head.

The lawmakers cite evidence that shows that the nation’s youth suffer as many as 3.8 million concussions every year while playing sports or other recreational activities. This number includes nearly one-fifth of all Massachusetts high school and middle school students who played on a sports team, they said.

The Legislature’s Joint Committee on Health Care Financing passed a bill yesterday that would keep student athletes from returning to a game after suffering a concussion, require medical approval before they can resume playing on a team, and introduce training programs to educate coaches, students, and parents about concussions.

Lawmakers said they expect the bill to become law this summer.

“We have to make sure our young athletes are protected,’’ state Representative Paul Kujawski, a Worcester Democrat, said at a State House rally yesterday promoting the bill. “Hopefully, we can put an end to the nonsensical attitudes that come with team sports.’’

At the rally, Dr. Robert Stern, codirector of the Boston University Center for the Study of Traumatic Encephalophathy, showed pictures of brains damaged as a result of repeated blows to the head. He said new evidence shows that 85 percent of concussions require about three weeks of recovery, meaning the patient no longer experiences effects such as blurry vision, memory loss, or headaches.

In some cases, he said, the recovery could take more than a month.

“There has to be a culture change in how we address brain injuries,’’ he said.

Asked whether students should be banned from playing football because of the frequency of blows to the head, he said no.

But he noted that the National Football League has taken steps similar to those called for in the bill, such as banning any player from returning to a game after suffering a concussion. He suggested other changes, such as reducing full-contact practices, changing the way players line up on the field to reduce the likelihood that they will slam heads, and using new helmets that reduce the impact of hits to the head.

At the rally, supporters of the bill cited a 2009 Massachusetts Youth Health Survey that found 18 percent of all high school students and 19 percent of all middle school pupils who played on a sports team in the previous year reported suffering a jolt to the head that caused them to lose consciousness or have memory problems, blurry vision, headaches, or nausea.

Ward said he would not have fought as hard during sparring sessions if he had known the damage the blows could cause.

“If I see any evidence that a kid isn’t all together, I sit him down,’’ he said.

Johnson said he was ignorant of the damage when he was playing for the Patriots. He calls concussions “the invisible injury.’’

“I know the hazards of football, but I didn’t know what repetitive hits to the head could do,’’ he said. “I am terrified about what can happen in the long run.’’