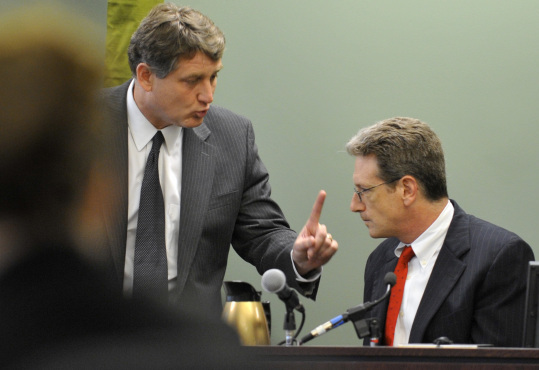 WOBURN — After weeks of gruesome testimony and assertions of insanity, a state-certified psychiatrist told jurors yesterday that John Odgren was well aware of his actions and the consequences when he fatally stabbed a fellow student in the boys bathroom at Lincoln-Sudbury Regional High School three years ago.

Alison Fife, testifying for the prosecution, said yesterday that Odgren’s clear state of mind after the stabbing, as well as his memory of certain details of the killing, shows he was not under any delusions, contrary to what other behavioral specialists have said.

Odgren, now 19, has pleaded not guilty by reason of insanity to the Jan. 19, 2007, killing of James Alenson, 15, a freshman trumpet player at the school whom Odgren had never met. He faces life in prison. If found not guilty by reason of insanity, he would be sent to a state psychiatric hospital until a judge rules he is no longer a danger to the public.

Fife was the prosecution’s rebuttal to three child behavioral specialists who said that Odgren, a special needs student who has several mental disorders, was in a state of paranoia at the time and that he blanked out and committed the violence he read about in thriller novels. Her testimony is slated to continue today under cross examination, and jurors could hear closing statements later in the day.

Yesterday, Superior Court Judge S. Jane Haggerty excused one of the 16 jurors, but did not explain why.

The three other specialists testifying for the defense said that Odgren’s years of suffering from illnesses such as Asperger’s disorder, a form of autism, and the bullying and harassment that came with them caused him to regress into his own fantasy world of violence. They specifically pointed to Odgren’s obsession with the number 19. The killing occurred on the 19th day of the month and the 19th day of the year, and the number is also symbolic in Stephen King’s ‘‘The Dark Tower’’ series, a thriller.

Montgomery Brower, a forensic psychiatrist testifying for the defense, said under cross-examination yesterday that Odgren’s fixation with the number put him into a state of paranoia thinking that something cataclysmic was going to happen on the 19th and that he brought a knife to school that day thinking he would be a hero. He said that Odgren somehow snapped in the bathroom and stabbed Alenson and that the teenager does not remember many details.

But Fife said yesterday that Odgren does have some memories of the attack and that specific things he remembered and the way he acted afterward leave her to think that even though he suffered from mental illness, he was not legally insane at the time. Fife said Odgren’s clear discussions with authorities after the killing, his realization of what he had done, and his talk of punishment for the crime indicated he knew what he was doing.

‘‘If someone was paranoid, delusional, that would leak into their conversations,’’ she said. ‘‘He should have come out of the bathroom saying something about the 19th, something about ‘The Dark Tower’ series, anything about Stephen King. There were no signs of any mental illness at the time.’’

The other behavioral specialists testified that the brutality of the attack — one of the stab wounds punctured Alenson’s rib and pierced his heart — caused Odgren to snap out of the trance and realize the severity of what he had done.

Under cross-examination by Odgren’s lead lawyer, Jonathan Shapiro, Fife acknowledged that in her professional career she does not practice child behavior psychiatry and that she has never completed an evaluation of a juvenile to determine criminal responsibility.

Shapiro also questioned whether Fife had properly examined Odgren’s memories of the attack: For instance, while Fife pointed out that Odgren gave a description of a person who was in the bathroom at the time, even remembering the brand of his backpack, she did not realize that Odgren’s physical description of the person was wrong.

One of Odgren’s clearest memories of the attack apparently came less than two weeks after the killing, according to court testimony. He told a developmental pediatrician that he struggled to fall asleep, that he was tired, and that he had nightmares of the attack.

In the nightmares, Alenson was in the bathroom looking at him, with a knife in his chest.