On CatholicTV, new devotion to outreach

Broadcast arm of the Boston archdiocese has national plans 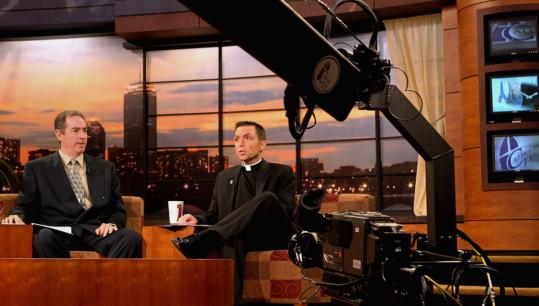 Today, The CatholicTV Network is a fill-your-plate buffet of 24/7 Catholic content, including not only the full menu of prayer and services, but also religious cartoons, a Catholic trivia game show for children, and “House + Home,’’ a decidedly wholesome “reality-style show’’ featuring local Catholic families. CatholicTV is on Twitter, Facebook, and YouTube; there is an iPhone application, as well as an active blog.

Within the next five years, CatholicTV’s leaders want their network to be available across America. This week, they signed a deal with that marks a first step toward that goal, the opportunity to pitch local Comcast service providers around the country for a spot in their channel lineup. In the process, the station hopes to encourage creative Catholics in dioceses nationwide to contribute content.

The Rev. Robert Reed, the station’s ambitious 50-year-old director, says CatholicTV has moved far beyond its initial mission, as Boston Catholic Television, of providing a way for Boston’s elderly and ailing Catholics to participate in worship from home. Today, he says, CatholicTV is a form of evangelization and outreach, seeking to show the joyful side of the church in the United States and to remind estranged Catholics of the “beauty and diversity and wealth’’ of the institution that was once their spiritual home.

Also, as the Vatican is struggling to deal with the sexual abuse crisis that exploded eight years ago in Boston, Reed sees an opportunity for Boston Catholics to help rebuild the archdiocese’s image.

“I think the CatholicTV network can be one of the ways that we can redeem ourselves as an archdiocese,’’ he said. “I want people to look at the Archdiocese of Boston and be able to smile and say, ‘You know, that’s a great church, those are good people,’ because we are.’’

Although televangelists like Jerry Falwell and Jim and Tammy Faye Bakker became household names in the 1980s, Catholics have not had such a vivid presence on American television since Archbishop Fulton J. Sheen’s hit 1950s show, “Life Is Worth Living.’’

Although some Catholic dioceses have developed strong local TV programming, “you don’t have an emphasis on charismatic preachers,’’ according to Sister Mary Ann Walsh, a spokeswoman for the US Conference of Catholic Bishops. The Catholic Church tends to emphasize sacraments, while the Protestant churches emphasize preaching.

The one Catholic television network that has flourished, Eternal Word Television Network, has kept a heavy focus on devotional aspects of the faith, broadcasting Mass, the rosary, and devotions, even as it has tried to broaden its content in recent years.

“Everything we do is about pointing people back to their local parish community,’’ said its chief executive, Michael Warsaw. Warsaw, who frowns upon the use of such words as “competitor’’ to describe other religious networks, seemed unperturbed about CatholicTV’s ambitions.

CatholicTV is in many ways dwarfed by EWTN, which boasts an annual budget of $50 million, 328 employees in the United States (there are 15 regional offices worldwide), and a reach of 160 million to 170 million households around the globe. By contrast, CatholicTV has 26 staff members who work out of a former convent in Watertown and has an annual budget of about $3.4 million. CatholicTV raises about $1 million a year in donations, which it supplements with income from a $14 million endowment.

CatholicTV is available in much of New England and some other parts of the nation; Reed estimates the programming reaches about 5.2 million households in locations as far-flung as Chattanooga, Tenn., and Fresno, Calif., by cable, and throughout the country by satellite.

The core component of the station’s daily schedule remains morning Mass, said by local priests who take turns presiding from the station’s chapel, usually with an in-studio congregation to help viewers feel as though they are part of a community.

Reed said he once got a letter from a viewer telling him of a woman who dressed in her Sunday best to watch Mass each day on her television. “It’s their companion and connection to the church,’’ he said.

Some of the station’s most entertaining programming still has the look of community access television. “Going My Way,’’ for example, features a pair of priests, with a microphone and a piano, singing standards such as “Embraceable You.’’ On “Spotlight,’’ two priests review movies, but they often talk about trends or themes.

CatholicTV is working hard to improve production quality, even experimenting with 3-D on television and on the Internet. The April edition of the station’s magazine, the CatholicTV monthly, included a pair of 3-D glasses.

CatholicTV is seeking to develop partnerships with other dioceses. It recently began running a show for teenagers created in the Trenton, N.J., Diocese. Reed is trying to scrape together the money to buy the rights to run better movies and, he hopes, episodes of “The Flying Nun.’’

CatholicTV has a lively presence on Facebook and Twitter, and its website makes it possible for viewers to watch streaming video, as well as about 1,400 episodes of archived programs.

Stewart Hoover, a professor who specializes in religion and media at the School of Journalism and Mass Communication at the University of Colorado at Boulder, said he doubts that CatholicTV will be able to attract younger people who are not Catholic already.

The very notion of an officially Catholic channel is “somewhat anachronistic,’’ he said. “It’s not consistent with the way audiences today consume media.

“Even religious audiences . . . don’t go for the symbolic blessing of a channel,’’ he said. “They resent having an authority telling them this is the proper way to think about things.’’

But some Catholics are voting with their remote controls.

Mary Casey, a 48-year-old librarian who lives in Hanson, said her family has begun watching a great deal more CatholicTV over the last five or six years, as programming has improved. A Catholic who would like to attend daily Mass but cannot fit it into her schedule, she said she watches Mass about four times a week, as well as educational shows and Vatican coverage.

“I feel like it is really on the cutting edge,’’ she said. “Anytime during the day I can either plop down at my TV or go on the website, and I can find something that will appeal to me and help me in my faith life.’’