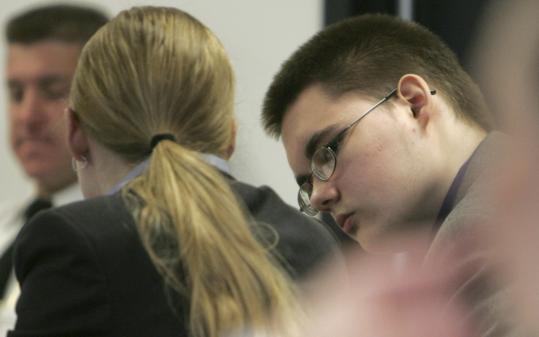 Prosecutors are seeking a conviction of first-degree murder for John Odgren, who killed a schoolmate in 2007. (Jacob Belcher/Pool via Associated Press)
By Milton J. Valencia Globe Staff / April 23, 2010

WOBURN — John Odgren’s lawyer asked the judge overseeing the teenager’s murder trial to detail to jurors the process that follows a verdict of not guilty by reason of insanity, saying that a general misunderstanding of the procedure could influence the jury’s deliberations.

Lawyer Jonathan Shapiro said yesterday that jurors often reject insanity defenses solely because of a false belief that the defendant would be released after a verdict is rendered.

He asked Middlesex Superior Court Judge S. Jane Haggerty to instruct jurors beyond the typical jury charge and explain that prosecutors generally seek to have a defendant committed. Typically, a judge would order the defendant to be evaluated at a state mental health hospital, and a doctor would ask that he be held. The defendant can petition a judge for release on an annual basis.

Generally, defendants are held for much longer than required for a conviction of manslaughter or second-degree murder, Shapiro said.

“They all spend decades, if not their lives, in a secure hospital setting,’’ Shapiro told Haggerty.

Assistant Middlesex District Attorney Marguerite Grant opposed the request, saying that there is no certainty of what will happen if a not-guilty verdict is reached and that the jury should not hear about any hypothetical situation.

Prosecutors are seeking a conviction of first-degree murder.

Haggerty took the matter under advisement.

The request for the addition to the standard jury instructions was one of several that lawyers made as Odgren’s case nears its end. Haggerty said that the lawyers could make closing arguments as early as Tuesday, after two weeks of testimony.

Odgren, now 19, faces life in prison without the possibility of parole for the killing of James Alenson, whom he had never met, in a boys’ bathroom at Lincoln-Sudbury High School on Jan. 19, 2007.

Also yesterday, a second child behavior specialist testified that Odgren met the legal criteria for being declared not guilty by reason of insanity: He had a mental illness or defect that prevented him from understanding the seriousness of what he was doing or from controlling his actions.

Ross Greene, a child psychologist who met with Odgren eight times and reviewed thousands of pages of his educational and mental health record, said the teenager suffered from a “transient psychotic episode.’’

Greene, testifying for the defense, with court approval, said Odgren’s mental disorders went beyond his diagnosis of Asperger’s disorder, a form of autism. Odgren had a high intellect that could be deceiving because Asperger’s disorder took over his ability to interact properly with others. He was socially awkward, Greene said. And that awkwardness made him a target for bullies through his childhood years, the psychologist said.

The bullying and teasing and Odgren’s depression, anxiety, and nervousness caused the teenager to be frustrated and confused, Greene said. He said people with such disorders tend to regress into a “world of their own making,’’ occupied by whatever obsession they may find. In Odgren’s case, it was natural disasters, then weapons, then thriller novels, particular “The Dark Tower,’’ a thriller by Stephen King.

Greene said Odgren was so obsessed with the stories that he started to fixate on 19, a symbolic number in the series, and that he awoke the morning of Jan. 19, 2007, thinking something cataclysmic was going to happen.

He said that the brutality of the attack helped bring Odgren back to reality and that the teenager’s sudden shock when he saw the blood indicated that he had been in a trance.

“He came back to reality very quickly, and he was very mortified at what he saw,’’ Greene said.

But Assistant Middlesex District Attorney Daniel Bennett tried to show, through cross-examination, that Odgren was aware of what he was doing and understood the seriousness of it. Bennett pointed out that Odgren told other psychiatrists different stories, and that at one point he said he found the psychiatrist’s interviewing entertaining.

“I have to figure out what I want to say, what I should say, and what is truthful,’’ Odgren said, according Bennett.