When language is blocked, music may offer detour 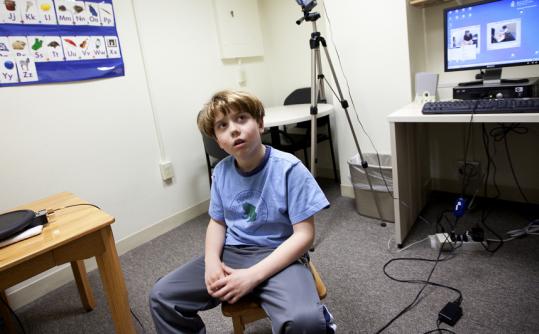 Lee and Mary-Helen Black had nearly given up hope their son would speak.

Physically, Tripp was fine, crawling, standing, and walking on schedule. But language eluded him. Lee Black vividly recalled when Tripp, nearly 2, sat in his highchair and tried to sing a children’s song. He started to say “head,’’ then faltered, as if the word had crumbled out of his grasp.

“I watched him freeze,’’ his father said. “That was the ultimate moment.’’

Tripp was later diagnosed with autism, a disorder that can impair children’s ability to speak. Despite years of therapy, he did not talk.

Then last fall, at age 8, he began an experimental program that coaxes speech using singing, movement, and imitation. After 10 weeks, he could say “mama,’’ “dada,’’ “bubbles,’’ and “bye.’’

One evening, his brother, Luke, was having trouble getting the family dog onto his bed. “Journey, up!’’ he called.

For his mother, that simple exchange was huge — Tripp had spontaneously used his voice, joining in a bedtime ritual.

“That’s what a family is supposed to feel like; when you’re putting your kids to bed, everybody’s supposed to be participating,’’ she said later. “A little thing like that can carry me for a month.’’

The language gains from the Beth Israel Deaconess Medical Center therapy may seem small to an outsider. Tripp, now 9, is learning words and short phrases, and his pronunciation is inexact: “All done!’’ sounds more like “Ah-duh!’’, pizza more like “bee-dah.’’ He still uses sign language and cards with pictures on them to communicate. But for such children to begin to say words is immensely gratifying for parents and a critical step for the children to be able to benefit from traditional speech therapy.

“There’s very little available for these kids. A lot of things have basically failed so far,’’ said Gottfried Schlaug, director of the music and neuroimaging laboratory at Beth Israel Deaconess.

Estimates vary, but as many as a quarter of children with autism are nonverbal. Children with autism tend to have superior auditory skills and have a particular attraction to music, Schlaug said, so “music-making may provide an alternative entry into a broken or dysfunctional brain system.’’

The therapy is built on two threads of research. One has found that music-making can change the brains of healthy normal people and plays a role in engaging and strengthening connections between the auditory and motor regions of the right side of the brain. The intervention also draws on a treatment that helps stroke patients regain speech after suffering damage to the speech centers in their brain, by singing words and phrases and using a coordinated movement of one hand.

Schlaug’s team adapted the stroke therapy for children. Researchers sing words or phrases to the children while showing them a picture of the action or object, and guide their hands to play two pitched drums.

Supported by a grant from the Nancy Lurie Marks Family Foundation, Schlaug and colleagues have tested the eight-week, daily therapy in about 10 children, and they have measured improved speech production and increased speech output. The results have yet to be published, but the researchers hope these findings will help them raise money to expand the study.

The theory behind the therapy is that the combination of sound and movement can activate a network of brain regions that overlap with brain areas thought to be abnormal in children with autism. Researchers think the intensive, repetitive training on sound paired with motion will help strengthen those abnormal areas.

Earlier this month, at a two-month follow-up session, Tripp hung up his sweatshirt and sat down at a table. Patient, but exhausted from a day at school and an earlier testing session, he tapped his fingernails on the table as if to say, let’s get started.

Postdoctoral fellow Catherine Wan sat across from him and sang “Hello,’’ guiding Tripp’s hands to the drums. “Heh-wo,’’ he responded, hitting the drums at the same time.

She showed him a jar of bubbles, one of his favorite rewards. “Bub-buh,’’ he said.

To researchers who specialize in autism, the approach is exciting.

“I was just really very impressed with what I saw,’’ Boston University psychology professor Helen Tager-Flusberg said after watching videos of the therapy sessions. She has agreed to collaborate with the Beth Israel Deaconess group on future research.

“Obviously that’s not a full-fledged controlled experiment at this point . . . but I don’t know of other approaches that have been particularly effective in getting children beyond the age of 5 or 6 to start speaking. I think the idea of using this rhythmic motor approach . . . makes an enormous amount of sense from a neurological perspective,’’ she said.

Ruth Grossman, assistant professor of communication disorders at Emerson College, said she was intrigued by the approach, which was informed by the work with stroke patients.

“I don’t think it happens enough. If we stop thinking of patients as groups but think of deficits as the common denominators, I think we might find a lot more fertile ground for interesting things to do with different populations,’’ Grossman said.

For the Blacks, who live in Allston, the therapy has offered a new perspective on what is possible.

Tripp’s father helps him stretch before bedtime — a nightly ritual that has been getting louder. Lee Black usually counts during the exercise, and now Tripp joins in.

“What we feel now is he can get this stuff,’’ Tripp’s father said. “We understand he’s capable of a wider breadth than where we’ve been with him.’’

Also on The Angle: Freedom takes more than technology