As dispute with state flares, tensions rise over who should monitor sites 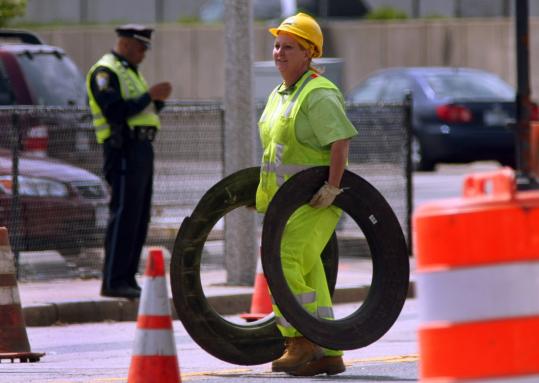 Lynn Williams, a construction worker in a yellow vest, was standing in the middle of a South Boston intersection, holding a sign warning drivers to slow down, when police showed up and ordered her to stop, she said.

“They threatened to arrest me,’’ she said. “Wasn’t that nice of them?’’

Within moments, according to the state’s top highway official, a project supervisor had pulled Williams away from assisting traffic to “deescalate the situation.’’ Police deny that they threatened to arrest her, but by the next morning, the civilian flagger had been replaced by a uniformed officer.

The incident Tuesday was the latest flare-up in an increasingly tense dispute between the Boston Police Department and the Massachusetts Department of Transportation over the use of civilian flaggers at city construction sites overseen by the state.

State officials say they want to use civilian flaggers, allowed under a new state law, to save money; police in Boston and elsewhere, who can earn huge amounts of money working at construction sites, have argued that public safety is better served by having officers, rather than civilians, working the jobs.

Now, in Boston, where civilian flaggers are allowed only at state highway projects or on state roads, police and city officials are closely watching construction sites for potential violations of traffic safety agreements between the city and state over the use of flaggers.

Last month, a tussle erupted over who should monitor traffic at a major construction project on American Legion Highway. On-duty officers in cruisers are now watching for cement trucks coming in and out of the construction site, even though the state had initially decided to use a civilian flagger.

State Highway Division Administrator Luisa Paiewonsky said in an interview yesterday that the use of civilian flaggers is working and that she believes tensions with police will ease.

“We think over time [police] will adjust to it as a reform,’’ she said. “We have projects all over the city of Boston and we have long enjoyed a very productive relationship with them. I’m sure they’ll get used to the flagger regulation and get used to the fact that we’re not going away.’’

Paiewonsky said the use of civilian flaggers has saved the state about $10 million on road projects, in part because construction managers can decide how many flaggers to assign to a construction site and how long they will work.

When Boston police details are used, officers are paid for a minimum of four hours, even if not needed that entire time.

But Boston police and city officials disagree that the state is saving money by using civilian flaggers. They also argue that civilians cannot ensure safe traffic flow or respond to criminal activity as a trained officer can.

“We know the streets,’’ Boston Police Superintendent William Evans said in an interview. “We can handle vehicles coming out at a rapid pace. I can name the amount of good arrests we’ve had out there. We bring so much more to the table than a flagger does.’’

Police say that they have no problem with flaggers working on quiet or dead-end streets. But they say the new law does not stipulate what kind of supervision should occur on low-speed, high-volume roads, which they define as having at least 4,000 cars a day. Boston officials are taking their case back to the State House, arguing for a bill sponsored by Representative Martin J. Walsh that would require police details on such roads.

The police cite as an example American Legion Highway, which has a 30-mile speed limit and 35,000 vehicles daily. The roadway has been the site of many fatal car accidents, and there are makeshift memorials to victims along its side, said Thomas Tinlin, the city’s transportation commissioner.

“We’re not talking about a state job on a one-way street,’’ he said. “We’re talking about major thoroughfares, evacuation routes, that get thousands of cars a day.’’

The dispute in South Boston stems from a meeting last Friday, when Boston police and city officials gathered with representatives of the state and a private contractor to discuss a project to resurface the road and build wheelchair ramps and sidewalks around the intersection of A and West Fourth streets.

Police said state officials told them civilian flaggers would not be used on the project. But on Tuesday morning, a lieutenant coming off his shift saw Williams at the intersection, according to a police report. He alerted the district captain and within moments, two superintendents joined him at the scene, along with at least three union representatives. One union official took pictures of the scene.

Thomas Nee, who heads the patrol officers union and came to the intersection himself, said he was livid that the state directed a civilian to stand on a street that leads to a hospital, Boston Medical Center.

“It’s ridiculous in a major artery like this,’’ he said. “This is an almost bald-faced, in-your-face move by the state.’’

But Paiewonsky, whose department is overseeing the project, said the state had agreed to place officers at the two intersections flanking A and West 4th streets, but also reserved the right to use a flagger in the area between the officers and chose to do so.

“In the 18 months since we’ve implemented this, we have had not one incident,’’ Paiewonsky said. “We have an excellent safety-work zone record for a reason.’’

She said traffic management plans are carefully prepared to ensure the safety of the flagger and drivers. “Some situations in a construction work zone don’t call for a police detail,’’ she said. “There was no reason not to have a flagger there.’’