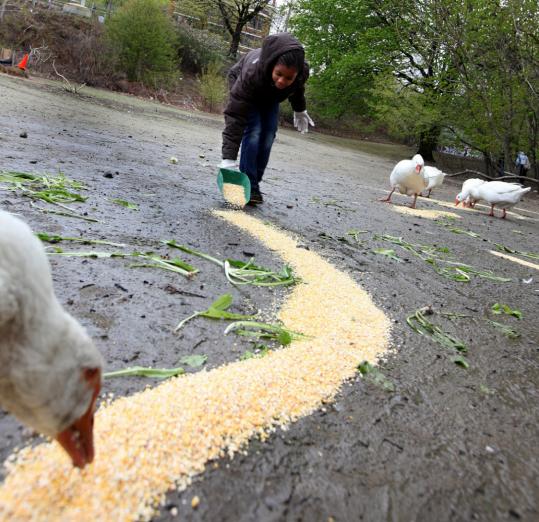 Jennifer Brown, 9, was among a group of young people who helped to feed geese and clean up the area off Memorial Drive near the BU Bridge yesterday. “I enjoy helping the earth,’’ she said. (Pat Greenhouse/ Globe Staff)
By Taylor Adams Globe Correspondent / April 19, 2010

The young people came to pick up trash and debris, and left a different kind of litter in their wake.

Lettuce, greens, seeds, and apples were strewn across the ground, leading to a feeding frenzy among a large flock of hungry geese that honked loudly as they ate.

“I wanted to touch them, but I’m scared,’’ said Abidah Muhammad, 19, with a laugh. Another volunteer petted a contented-looking goose resting nearby.

A group of about 20 people, one as young as 9 years old and several high school and college students, fanned out across a muddy clearing wedged between construction and train tracks on the Cambridge side of the Charles River yesterday afternoon.

They cleared trash and debris from the area, a nesting ground for geese disrupted by the nearby work zone, and fed the hungry animals.

The group of volunteers, of different faiths and backgrounds, was one of several that branched off from a meeting of more than 100 people yesterday morning.

They were taking part in the third annual Day of Interfaith Youth Service, an event that draws area youths from diverse backgrounds to work on service projects throughout the city, all of which relate to issues of homelessness and the environment.

Christians, Jews, and Muslims, as well as some who described themselves as interfaith, volunteered at Boston-area shelters, soup kitchens, and other places that support the needy, and also by canvassing for awareness of environmental issues around Boston.

Alexander Levering Kern, executive director of Cooperative Metropolitan Ministries, a main organizer of the event, and a Protestant chaplain at Brandeis University, said the day of service was an opportunity for the youth of Boston’s diverse religious communities to learn from one another and about one another’s faiths, specifically regarding what each teaches about service.

“Young people are the pioneers of the new religious landscape,’’ Kern said.

He added that part of the goal of the interfaith events was to heal faith divides that have provoked unrest, such as a recent uproar over construction of a mosque, the Islamic Society of Boston Cultural Center, in Roxbury Crossing, said Kern.

“This isn’t about simply feel-good and kumbaya,’’ he said, describing the necessity of promoting understanding between faiths as a “matter of life and death’’ in a wider, global context.

The youth service day is one of a handful of major events that take place throughout the year, said Kern.

Earth Day, which will be celebrated Thursday, motivated the Charles River cleanup, he said.

Former longtime Boston news anchor Liz Walker, now a minister who works with youth at Bethel, said that she was impressed with the younger generation’s knowledge of environmental issues.

“It’s nice that this generation gets it, and is trying to make a difference,’’ she said.