After spot on ballot is denied, Mihos says he won’t run again 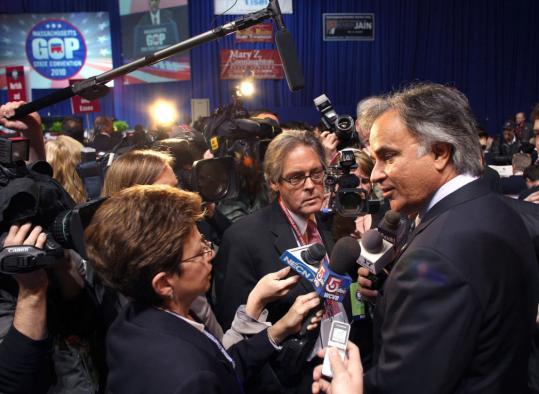 Christy Mihos answered questions yesterday at the convention. Despite the fact that his campaign to get on the ballot ended in defeat, Mihos said the effort had been worth it. (John Tlumacki/Globe Staff)
By Noah Bierman Globe Staff / April 18, 2010

WORCESTER — As Christy Mihos sat in a spare room backstage putting the finishing touches on his convention speech, his wife tried to pump him up.

“This is your time, this is what you wanted,’’ Andrea Mihos said, looking into his eyes. “It’s never going to happen again.’’

She was right. Six hours later, his long-shot bid for the Republican gubernatorial nomination ended in resounding defeat to Charles D. Baker, whose lopsided victory yesterday will keep Mihos off the primary ballot. Mihos said moments later that he would not run for office again.

“Not with this wife,’’ Andrea Mihos said, acknowledging that she had had enough of his political adventures.

Mihos himself sounded almost as relieved as he sat on a folding chair, surrounded by a half-dozen supporters. “I’m going back to being Christy from Christy’s again,’’ he said, referring to his life as a Cape Cod convenience store owner.

“Thank God,’’ Andrea shot back, smiling at her husband of 35 years.

But although his months of campaigning and exhausting all-out push to make the ballot — including two days of missed meals — was rewarded with a blowout in the delegate vote, Mihos said it had all been worth it.

“Running for political office, that’s the best time I’ve ever had in my life,’’ said Mihos, 60.

Baker’s campaign lodged a strong effort to keep Mihos off the September primary ballot, distributing fliers highlighting his statement in a 2006 interview that he would vote for Democrat Deval Patrick if he was not running himself. Many delegates interviewed on the floor yesterday faulted Mihos for running as an independent in 2006, saying it damaged Kerry Healey’s bid for governor.

Before the vote, Mihos tried to drum up support for keeping him on the Republican primary ballot, saying it would be a chance to attract media attention to the party in the coming months.

“Are we up for a primary or not?’’ Mihos asked a group of Duxbury delegates on the convention floor.

One of the delegates, Paula Harris, offered a shrug and a polite smile in response.

“I can’t lie. I’ve never played poker well,’’ she said in an interview after Mihos moved on to canvass others. “I think Christy has a lot of great things to say. I think he hasn’t channeled it well . . . we need a united front.’’

Greg Dulchinos of Chelmsford was the rare delegate who said he wanted Mihos on the ballot “mainly just to give him a chance,’’ he said. “I know he sometimes stooped a little low, but . . .’’ he continued, trailing off without finishing the thought.

Mihos’s advisers, in preparing for yesterday’s big convention speech, were trying to help him hone a pitch that would avoid giving the pro-Baker crowd a chance to boo him, and preparing him to respond in case they did.

“It’s body language,’’ said Greg O’Brien, an old friend from Cape Cod who has been advising Mihos on communications. “People need to see the confidence, the excitement.’’

The speech he wound up giving, after taking the stage to the tune of Tom Petty’s “I Won’t Back Down,’’ avoided any references to the state’s health care plan as “Romney Care’’ or “Baker Care,’’ phrases edited out to avoid enflaming the crowd.

It included several lines designed to win applause, including antitax promises, critiques of the Big Dig, and pledges to eliminate some tolls. There were a few ovations, and no boos. “We’ve got the banners, the signs, we’ve got the music,’’ Mihos said from the stage. “But this isn’t about that. This is about you.’’

Mihos cast his opponents as the party establishment, arguing that the people, regardless of party affiliation, want choices.

“Do they want a primary?’’ he said of party insiders during an interview. “I don’t think so. They just want another suit.’’

Though his campaign has been dogged by financial problems and a steady parade of advisers leaving in frustration and confusion, Mihos remained a threat to make the ballot until the end. When the vote count came in, he pledged his support to Baker, calling him a “real Republican.’’