A stranger, a gift, and a marathon miracle

Ellyn Cohen needed a lung to live, then a woman she’d never met offered hers 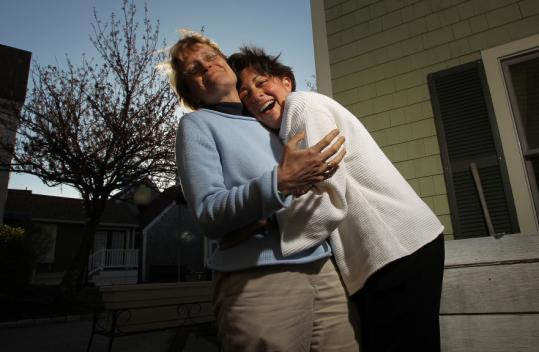 PLYMOUTH — When Ellyn Cohen and Hilary Greene rushed to greet and hug each other at the fire pit outside the Blue Eyed Crab Grill and Raw Bar, they looked like who they are today: two lively, middle-aged women, close friends who share the gift of gab and an agile wit.

You would never know that they share something else. Six years ago, Cohen was dying of a rare lung disease. Greene donated part of one of her lungs to save Cohen’s life. At the time, the two were total strangers.

And when Greene, who turned 50 last week, hits the pavement in her first Boston Marathon Monday, you will not be able to tell that she is running without one of the lobes of her left lung. She is doing it as a birthday present to herself; Cohen, 48, now celebrates that birthday as though it were her own.

“I would have died without her generosity,’’ Cohen said.

It was an unusual act of kindness. Last year, out of 1,661 lung transplants in the United States, only one came from a living donor. In 2008, the number of living lung donors was zero, according to the Organ Procurement and Transplantation Network, the government agency that coordinates national waitlists for organ transplants. And in 2004, the year Greene made her donation, she was one of just 28 living lung donors out of 1,172 transplants. That year, 492 people died while waiting for a lung.

As uncommon as living lung donors are, it is even less common for the organ to come from a stranger. And the way Greene found out about Cohen’s plight — from a mass e-mail forwarded by a friend — makes the story all the more incredible, said Sean Fitzpatrick, spokesman for the New England Organ Bank, the federally designated nonprofit organization that identifies deceased donors and recovers organs and tissues for transplants in the region.

“When you’re talking living lung donation it is usually someone the donor knows really well,’’ Fitzpatrick said. “Somebody’s alive now because of what Hilary Greene did. What she did was exceptional.’’

Cohen was diagnosed in 1994 with a progressive lung disease that is as lethal as it is hard to pronounce: lymphangioleiomyomatosis. She could not climb the stairs. Sometimes, she could not breathe. She suffered collapsed lungs all the time.

“I couldn’t do anything a woman my age could do,’’ Cohen said. “It was like house arrest.’’

By 2000, she was on the waiting list for a transplant. By 2003, she decided she had to stop waiting and look for herself.

A living lung donation generally requires two donors, according to the United Network for Organ Sharing, the nonprofit agency that administers the organ transplant waitlist for the government. One donor gives a lobe from the right lung, the other a lobe from the left. The donors need to match the recipient in blood type and lung size and volume. The donors have to be physically and mentally healthy. Cohen could only find one person who met these criteria — her brother, Howard Meyerson. Desperate to find the second donor, she sent out an e-mail to everyone she knew.

Greene, who lives in Centerville, received the e-mail in October 2003 from an old high school friend, with the subject line “Hopefully somebody in Massachusetts can help.’’ To her own surprise, Greene decided to consider the request.

“I’d always wanted to donate an organ,’’ she recalled. She had thought it would be a kidney — living donations of that organ are relatively common. “When I found out someone needed a lung or she could die, I was like, ‘looks interesting, I’ll look into it.’ ’’

Greene, who has worked in radio and run websites, is curious by nature and likes to try new things. She had never had surgery. She decided to try it out.

Her mother suggested she reconsider. “ ‘Oh, Hil, can’t you wait till I’m dead to do this?,’ ’’ Greene recalled her saying. Cohen, her husband, Lee, and their son, Marshall, dining with Greene in Plymouth this week, laughed at the memory.

When Cohen learned that she had found a donor who was not only willing but medically able to supply the second lobe, she was flabbergasted. Two weeks later, she picked up the phone to thank her benefactor.

“I couldn’t believe someone would undergo a complete surgery for a total stranger,’’ Cohen recalled. “How do you call somebody and say, ‘Thank you for offering your lung to me?’ ’’

“She told me, ‘I’m sorry I didn’t call earlier, I had two collapsed lungs,’ ’’ Greene said. “I can’t imagine not being able to breathe.’’

Before a transplant, a living donor is constantly reminded that it is OK to back out. Greene put aside her fears, and instead focused on her fascination with all the medical science.

Now they can laugh about the nervous moments before surgery.

“I was worried because I am Christian and she’s Jewish,’’ Greene joked. “I’m gay and she is straight.’’

“Any lung in a storm,’’ Cohen retorted. “Since I got the lung, nobody has converted either way.’’

They have become close. It started in the waiting room. Cohen’s and Greene’s loved ones mingled, commiserated, and started to get along. Now the two families get together frequently.

Cohen’s recovery took six months. Now she volunteers at her synagogue. She works at a women’s jewelry and gift boutique. She can breathe.

“Once you can breathe you kind of don’t have to think about it any more,’’ she said. “I feel great. I feel normal.’’

A few weeks after the surgery, Greene was playing tennis. The four lobes that remain in her two lungs are one less than a normal healthy person has. But her doctors have told her that her lungs work better than those of many healthy people. Two years ago, Greene started running. She decided to do the marathon to mark her half-century milestone. She got a charity number from her spouse, Angela Cenzalli, who works for the Special Olympics. But she will wear the shirt of the New England Organ Bank, to draw attention to the plight of the more than 1,800 people in the country awaiting lung transplants.

“If more people registered as donors we wouldn’t have to take parts out of living bodies,’’ Greene said. “I’m not asking people to donate their organs when they are alive.’’

She is not expecting to finish the race in less than five hours.

“I like to think that I’ll be fairly high up among the four-lobe people,’’ she smiled.

So look for Hilary Greene at the back of the pack. She will be the one missing a lobe.

Though to look at her, you would never know.

UPDATE: Hilary Greene finished the Boston Marathon in 5 hours and 26 minutes. "I was hoping to be closer to 5 hours or maybe 5:15. Ah well," she said. "My lungs were fine, my quads are what did me in!" She is back to playing some golf and tennis and running 15 to 20 miles a week. "Overall it really was a great experience, just like the surgery -- something very special that I am very lucky to have been a part of!" Ellyn Cohen had her six-year checkup in May, and reports that her breathing function is stable and her doctors were pleased with her test results. She spends a lot of time volunteering at her synagogue and in May became second vice president of the board of directors. "Every day is a gift!," she wrote in an email. "I'm thrilled to wake up, shower without effort, get dressed and do a day's worth of activities -- something I couldn't do 6 years ago!" - July 15, 2010