DeLeo aims for vote this month despite outcry from opponents 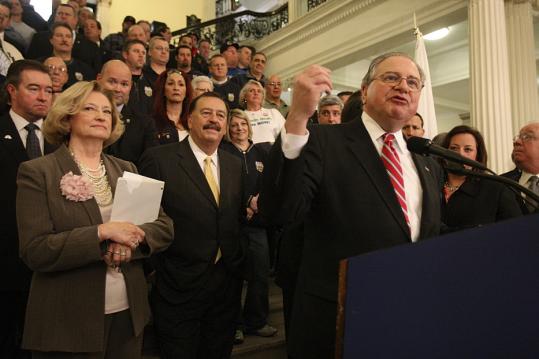 House Speaker Robert A. DeLeo said yesterday that he would not hold a public hearing on his 172-page bill to license two resort casinos in Massachusetts and slot machines at the state’s four racetracks before moving the measure to the House floor for a vote the week after next.

The plan — as casino lobbyists, union officials, and racetrack supporters rallied behind the bill — drew criticism from opponents of expanded gambling and even from Governor Deval Patrick, a casino supporter, who said the speaker should allow all sides to be heard on a proposal that could profoundly alter the state’s social and economic fabric.

“I know people have thought about these issues before, but it’s a very important decision for the Commonwealth,’’ the governor said. “There are people who have strong feelings on all sides of it, and we should do our work here out in the open. We should have a hearing and let people make their case.’’

Kathleen Conley Norbut, president of the group United to Stop Slots in Massachusetts, expressed outrage at the decision. “I almost can’t find the words for that,’’ she said. “It’s not overstating it to say it’s a misstep in democracy.’’

DeLeo, who has been crafting the legislation for months, said lawmakers have already held two public hearings on other gambling bills this session and have discussed the issue many times in the two decades he has served in the Legislature.

“Everything has been studied thoroughly, and we’re ready to go,’’ he said.

DeLeo is hoping to muster the two-thirds majority needed to override a possible veto by Patrick, who opposes slots at the tracks. For the first time since he became speaker early last year, DeLeo has ordered his leadership team to not only poll members on the bill, but to push them on it as well, legislators said.

“The speaker is making it clear that he wants people to vote for this bill,’’ said one lawmaker, who requested anonymity to discuss private conversations. “We’re not going to think about much else until this is over.’’

DeLeo predicted he will be able to cobble together enough support to pass the bill two years after his predecessor, Salvatore F. DiMasi, a staunch gambling opponent, led the House to reject, on a 108-to-46 vote, a plan pushed by the governor to license three resort casinos. Even some gambling opponents are saying the bill could pass.

“Since Sal DiMasi left, it’s been inevitable that we’re going to have expanded gaming in the Commonwealth,’’ said Representative Ellen Story, an Amherst Democrat who said she is personally opposed to expanded gambling. “It’s sort of a perfect storm, with the governor and the Senate president and the speaker all wanting expanded gaming and the economy being in such a terrible trough.’’

A beaming DeLeo unveiled his bill yesterday before a large and enthusiastic crowd of gambling lobbyists, union officials, and racetrack supporters gathered around him.

Casting the bill as a jobs measure, he was repeatedly interrupted by applause and cheers from union construction workers standing behind him.

DeLeo was joined by officials from the Greater Boston Chamber of Commerce, the Massachusetts Municipal Association, and the Massachusetts AFL-CIO, who praised casinos as a way to create jobs and ease the financial strain on state and local budgets.

“When you look at this bill and you look at the people who spoke here today, it gives you a great idea of the support it has,’’ DeLeo said.

It is not at all clear, however, how the bill will make it past Patrick and Senate President Therese Murray, who both support casinos but oppose slots at the tracks, arguing that slots would not create as many jobs.

An hour after DeLeo’s press conference, Patrick held his own outside his office to restate his concerns about DeLeo’s bill.

“There’s a right way and a wrong way to do this, and he and I are not yet aligned on the question of having any slots at tracks,’’ Patrick said. “What we get from slots is the hardship and the human impact, without the pickup in jobs.’’

DeLeo, the son of a Suffolk Downs maître d’, said, however, that unless the tracks add slot machines, they could eventually close, putting 664 employees out of work.

“To think that their jobs are any more dispensable than anyone else’s job is wrong,’’ he declared to applause. “Maybe they’re not the most glamorous . . . but every single one of those jobs supports a family.’’

Murray declined to comment on the bill, saying she had not read it.

Under the plan, prospective developers must commit to spending a minimum of $500 million per casino and $75 million for each track. The tracks would be allowed to operate up to 750 slot machines each, a number that was lower than some expected and intended to ease the governor’s concern about these so-called racinos.

A special commission would determine where the casinos go.

House leaders said the plan would capture hundreds of millions of dollars that Massachusetts residents currently spend annually on casinos in other states.