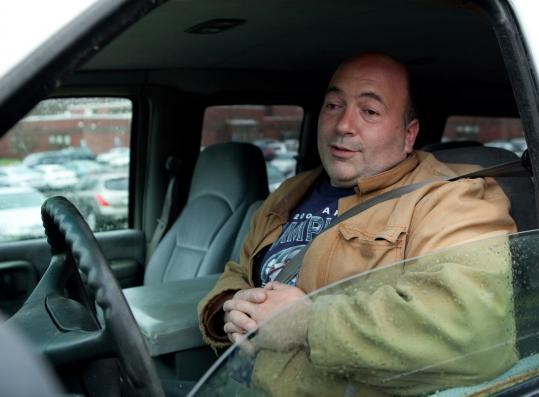 Stephen Brault was among the parents outside South Hadley High School yesterday talking about the charges against nine teenagers in connection with Phoebe Prince’s suicide in January. Brault’s son attends the high school. (Matthew Cavanaugh for The Boston Globe)
By Peter Schworm and Milton J. Valencia Globe Staff / March 31, 2010

SOUTH HADLEY — Enraged by revelations that staff members at South Hadley High School knew that Phoebe Prince was the target of withering harassment long before her death, residents and public officials yesterday angrily accused the school system of neglecting vulnerable students and called on top administrators to resign.

“Now we find out they knew all along, and did nothing,’’ said Joe Marois, who runs a local construction company. “People are just bewildered they didn’t step in, and are wondering why they weren’t included with the students in the prosecution.’’

School officials, who had previously asserted they knew little about the bullying until after Prince’s death, said in a statement yesterday that they had removed an “additional small group of students’’ from school — the students were not identified — and upgraded the system for tracking bullying incidents. But officials said nothing to address questions about their role in handling the Prince case.

State Representative John W. Scibak, who represents South Hadley, slammed school officials for their silence, and said the public deserves a full accounting of why administrators didn’t act on the harassment reports.

“I’m looking for answers,’’ he said. “Families have a reasonable expectation that these kinds of complaints will be act ed on, and they are entitled to a full explanation of what transpired. People wanted answers two months ago.’’

The outrage stemmed from new details of a monthslong campaign of verbal abuse and physical threats that Prince endured before hanging herself Jan 14. Those details were released Monday by Northwestern District Attorney Elizabeth Scheibel. She announced charges against nine teenagers in connection with Prince’s death and excoriated school officials for failing to intercede, despite the fact the harassment was known to a number of faculty, staff, and administrators.

Scheibel also said that Prince’s mother had spoken with at least two school staff members about the bullying, which the superintendent of schools, Gus Sayer, had previously denied.

The discrepancy infuriated residents, who criticized school officials for turning a blind eye to Prince’s persecution, then claiming they hardly knew about it.

“They lied to the community,’’ said Darby O’Brien, whose stepdaughter is a senior at South Hadley High School. “They lied about how long it had gone on, and they lied that the mother had never come forward. If they had stepped in, this could have been prevented. But they failed miserably, and I don’t think you can trust them to protect the safety of the students.’’

In the school district’s statement yesterday, Christine Sweklo, assistant superintendent for the South Hadley Public Schools, said that administrators had launched a review of the district’s bullying policies and would begin entering reports of harassment — and the subsequent responses — into an electronic database.

Sayer, who aides said was out of town, the high school principal, and several School Committee members did not return phone calls yesterday.

“We are practically begging for answers, and they have none,’’ said Erica Laughlin, a 39-year-old mother of four. “We are absolutely fit to be tied that none of the staff is being held accountable. This has apparently been an issue for a long time, and I still don’t see anyone taking responsibility.’’

Many noted that Sayer told a School Committee meeting in February that it was regrettable Prince’s family didn’t report several incidents to school officials in the weeks prior to her death.

He also told the Globe in January that Prince was primarily harassed online and through text-messages. Scheibel said the harassment was primarily carried on during the school day.

Prince hanged herself in the stairwell outside her family’s apartment shortly after arriving home from school on a day of what Scheibel described as tortuous abuse, some of it witnessed by a teacher who did not alert administrators until after her death.

The teenagers, who include three juveniles, face charges ranging from criminal harassment and civil rights violations to stalking and statutory rape. Relatives of the teenagers who have been charged could not be reached for comment or declined to comment.

Although the Prince issue was not discussed at last night’s Select Board meeting, several board members addressed the matter afterward.

“I guess I would look to the School Committee and the school administration to review the matter further,’’ said board chairman John R. Hine. “The [School] Committee is the authority for running the school department, so this is their area. I certainly hope they make every effort to investigate further that administrators knew what had been going on.’’

Town meeting members Michael Keane and his wife, Kathleen, said they were frustrated that the town officials were silent on the matter during the meeting.

“It’s very disappointing to see no one in our town has the guts to stand up and say anything,’’ said Michael Keane, who has lived in South Hadley since emigrating from Ireland in 1963. “I think the town is still soul-searching.’’

He said the lackluster response by school and town administrators is “embarrassing for the town and it’s embarrassing to us.’’ Select Board member Robert G. Judge declined to give his thoughts on the indictment of the students or on the accountability of school administrators.

“I have no reason to second guess the DA. I just don’t know enough’’ about the situation, he said. “I know people are very interested in the indictments and if the school knew more, but I’m more interested in how to prevent this from happening again.’’

“Once it happens more than once, a red flag should go up,’’ said Elizabeth Englander, who directs the Massachusetts Aggression Reduction Center. “There has to be communication and standardized procedures so cases like this don’t fall through the cracks, and that’s what appears to have happened here.’’

Specialists said the school’s poor response is not unusual and highlights the need for mandated reporting laws and training on bullying prevention. But others said the severity of the harassment leveled at Prince, and the number of students involved, suggested a systemic, deep-rooted problem.

“If you have nine kids who are charged, it’s a culture,’’ said Elizabeth Stassinos, criminal justice professor at Westfield State College. “There’s . . . permission from everyone involved. This happened right in front of them.’’

“It starts at home,’’ said Janna Darrow-Rioux, who has a son at the high school and has been involved in antibullying efforts. “I don’t blame the school. I think they did as much as they could during a very difficult situation. People often look for an established organization to blame rather than individuals.’’

At the Crack of Dawn restaurant, which was abuzz over a case that has thrust a small town into a harsh public limelight, people said the town is ill-at-ease with the growing scrutiny.

“This happens in other areas, not here,’’ said Shaun Moran, 44, who works at the restaurant. “They’re embarrassed by the whole situation.’’

For a town that had just begun to recover from the shock and grief of Prince’s death, the severity of the charges sent many residents reeling.

“Everyone was taken aback by this,’’ said Paul Beecher, the town administrator. “I don’t think anyone knew the extent of it. It has reopened, I suspect, wounds that started to heal.’’