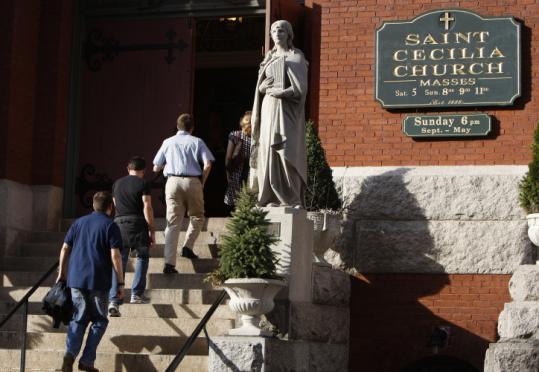 Worshipers at St. Cecilia’s in the Back Bay hailed the pope’s letter for being a step in the right direction. (Matthew J. Lee/Globe Staff)
By Eric Moskowitz Globe Staff / March 21, 2010

Pope Benedict XVI’s first pastoral letter on child sexual abuse in the Catholic Church drew sharp criticism yesterday from local victims and their advocates, who said the pope failed to place responsibility on church hierarchy, acknowledge his own role in the crisis, and address its multinational nature.

But among area parishioners attending evening Mass yesterday, reaction was mixed. Some joined victims in calling the letter a missed opportunity, while others welcomed it as a balm for wounds left by the abuse scandal.

Some were unfamiliar with the 4,500-word letter, which was directed at Catholics in Ireland and will be read at churches across that country today. The pope expresses “shame and remorse’’ while apologizing to abuse victims and their families, and he chastises Irish bishops for their “grave errors of judgment’’ over the years in mishandling reports of abuse.

“While this is very lengthy and much more emotional than anything he’s said before . . . he still isn’t calling for any of his bishops to resign, he still is not demanding that they disclose the names of the abusers and the files, and the names of the enabling bishops and other church officials,’’ said Anne Barrett Doyle, codirector of BishopAccountability.org, a Waltham nonprofit research group that documents the sexual abuse crisis. “So he’s not really calling for accountability. He’s just simulating that.’’

Helen McGonigle, a Connecticut lawyer who was sexually abused by an Irish priest as a child in East Greenwich, R.I., in the late 1960s, called the letter “sorely inadequate.’’

McGonigle was abused by the Rev. Brendan Smyth, who used his position to molest and rape dozens of children during a nearly half-century career in which he was shuffled among parishes on both sides of the Atlantic.

Cardinal Sean P. O’Malley of Boston did not immediately issue a statement about the pope’s letter, but he plans to reflect on it in his blog later this week, a spokesman said.

In 1975, Ireland’s current senior Catholic leader, Cardinal Sean Brady, helped gather evidence against Smyth while serving as a priest and Vatican-trained canon lawyer — then required the children involved to sign oaths promising not to tell anyone outside the church.

Brady has said he would not resign unless ordered by the pope, who has not called for his resignation and who has not accepted resignations offered by three other Irish bishops associated with concealing abuse in the Dublin Archdiocese.

“That needs to happen, and [the pope] himself has to think about his own resignation because of his role in covering up these crimes in Munich [as an archbishop] and elsewhere as they came to his attention,’’ McGonigle said. “He’s a selfish man if he doesn’t resign, because he will destroy the church.’’

The pope in his letter did not address the abuse crisis roiling much of Europe, including his native Germany.

“He’s the worst offender for keeping the secrecy and putting the church as an organization before the welfare of children,’’ said Ann Hagan Webb of Wellesley, who was abused by a priest in West Warwick, R.I., as a child and who is now New England codirector for SNAP, the Survivors Network of those Abused by Priests. She said the pope’s credibility is strained by the latest revelations from Munich. “Any good administrator would know if something as serious as that was happening. Either he’s totally stupid or he’s lying.’’

Jeff Thomas, a Boxford contractor who was also abused by Smyth as a child, said the pope’s letter reads as little more than an extended “sorry.’’

“They won’t admit to the responsibility of their actions,’’ said Thomas, an East Greenwich native. “There’s no making it right, there’s no anything.’’

At multiple Catholic churches yesterday, parishioners interviewed had mixed reactions to the letter.

“It’s a little bit late. It’s been trashed around enough, talked about enough,’’ said Ellen Dunne, a native of Ireland, after attending Mass at Gate of Heaven Parish in South Boston, where she has lived for seven years. “I blame Cardinal Law for what happened here in Boston, and I think they need to do everything they can to put a stop to this.’’

Molly Byrne of Weymouth, who received her First Communion at Gate of Heaven seven decades ago, likened the abuse crisis to the Holocaust, when German citizens and even world leaders stood by or abetted Nazi Germany.

“They knew what was going on, but they said something a little too late,’’ Byrne said. “It has been going on for centuries. Maybe it will be different if they didn’t have celibacy laws.’’

At the Paulist Center, a worship center on Boston’s Park Street popular among liberal Catholics, some greeted the pope’s letter with skepticism.

“It is very kind and very politic of the pope to send a letter to Ireland when his native country is embroiled in the accusation of sexual abuse,’’ said Rosanne Procopio of Somerville, sarcasm in her voice.

But at Saint Cecilia Parish, a Back Bay church first erected in the 1890s to serve the Irish immigrants then laboring for the neighborhood’s Brahmins, worshippers hailed the pope’s letter for being a quicker step than anything done by church leaders during the Boston crisis.

Richard Clark, the church’s music director for the past two decades, praised the letter as a rapid response.

“It’s a start. It’s a quicker start than what happened here,’’ he said. “We’ve been through this, and if you were to learn any lessons from what happened in Boston, it’s that you’ve got to get on top of this right away.’’

After BishopAccountability.org late last year produced a list of 70 Irish priests who had allegedly abused children in the United States, the Archdiocese of Boston in January disclosed that three names on the list had at one point been granted local faculties, meaning they were permitted to celebrate Mass and perform other duties here. One of them, Dennis P. Murphy, served at Saint Cecilia in 1996 and 1997.

The archdiocese said it was not aware at the time about allegations against Murphy or the other two priests and received no reports to suggest any incidents occurred here.