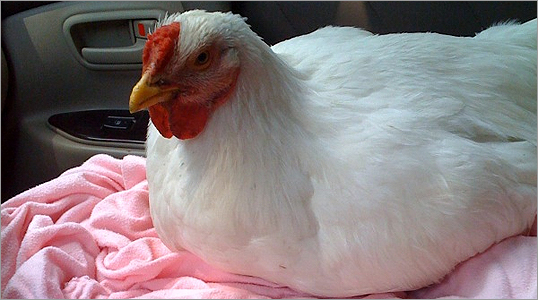 Every time I read a story about another person in another random suburb raising a backyard chicken, two thoughts rattle through my frightened little mind: They’re crazy, and that must mean I am, too.

I might as well just confess: I have a chicken in my life — actually, a rooster. His name is Buddy, and believe me when I say that he wasn’t my idea.

Buddy came into this world as the marquee player in an elementary school science project — a mail-order experiment involving a heat lamp and a few eggs. In retrospect, thank God only one of them hatched.

Once the science fair was over, I assumed that Buddy would cluck out his days on a bucolic farm. Two young girls and their soft-hearted mother, a veterinarian, had very different plans. As the newcomer in that group, I didn’t have much say.

They stuck to their guns when a fuzzy chick grew into a very large fowl. They weren’t bothered when their hen turned out to be a rooster. They didn’t even mind when Buddy began a daily cock-a-doodle-doo regimen at dawn’s first light. They housed him in the garage, put towels over the windows, and let him crow.

The result is a pet rooster high-stepping and variously barking around a suburban yard with entitled impunity. Why beat around the nest? Buddy thinks he owns the place.

I thought — hoped, really — that the neighbors would complain to authorities. Not quite. They deliver corn on the cob. One young boy stops by every afternoon with chunks of cheese. I’m betting Buddy prefers something imported.

Believe me, Buddy’s is a nice life. By day, he wanders free, picking through the bushes, pecking at the soil, and accepting visitors. At dusk, he strolls into the garage at his leisure, climbs the strategically placed furniture that rises toward his perch, and rests on a throne of soft blankets, high above any potential harm. The garage door comes down about 8, leaving him in peace.

While none of this is normal, some of it is especially bizarre. Buddy likes car rides; he sits silently in the passenger seat mesmerized by the passing scenery. He chases Abigail and Caroline, 9 and 7 respectively, around the yard in games of interspecies tag.

The kids scoop him in their arms and stroke him as if he’s a dog. Buddy rests his head on their shoulders. “Pet his wattle,’’ they say, thrusting him in my direction. Pet his what? Buddy eyes me warily and pecks at the air, motions that I take as a warning. Our feelings are mutual.

He’s expressed a strong preference for the indoors. He stands on the stoop, peering in the glass door, waiting for someone, anyone. If no one comes, he pecks on the door. Once in, he struts toward the kitchen or joins the girls on the couch for an episode of “iCarly,’’ always with a suspicious eye on me. I like that he hasn’t realized yet how little power I have.

And to answer the obvious question: No, he’s not. There’s always a bottle of Formula 409 within reach.

True story: I was on the upstairs computer just the other day, Googling “Lifespan of a rooster.’’

That was Buddy at the front door. The kids were in the basement. Their mother, Pam, was running errands.

I clicked on Ask.com, murmuring, “Give me some good news.’’

The answer flashed on the screen: “Average well cared for rooster can live over 10 years and sometimes up to 15 years.’’

I heard the girls open the door. I heard one of them exclaim, “Oh, poor little Buddy, outside all alone.’’

Well cared for? Fifteen years? This bird’s going to live to be 100. 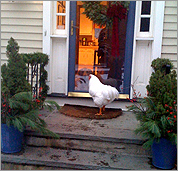 Buddy waits outside on the stoop.
Your comment is subject to the rules of our Posting Policy
This comment may appear on your public profile. Public Profile FAQ