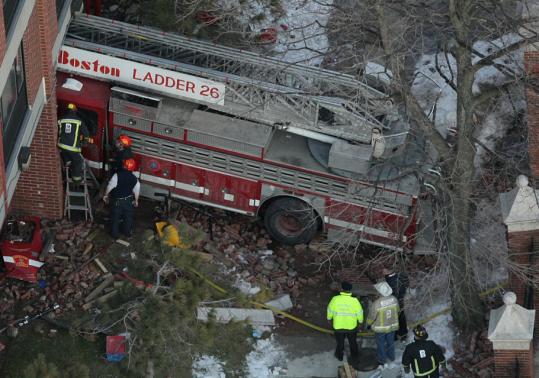 An internal Boston Fire Department inquiry into a fatal firetruck crash last year blamed brake failure that was caused in part by inadequate maintenance, according to a report released yesterday.

The report also cited poor driver training and improper truck brake adjustments performed by firefighters who were not licensed mechanics.

The conclusions mirror those of three other reviews of the crash on Jan. 9, 2009, when Ladder 26 lost its brakes, careered down a steep hill, and slammed into a Mission Hill apartment building, killing Lieutenant Kevin M. Kelley, who was in the passenger seat.

Investigations by Boston police and District Attorney Daniel F. Conley cited poor driver training and improper brake adjustments by firefighters as contributing factors. A review by an outside consultant found the department had a “loosey goosey’’ approach to firetruck maintenance and no preventive maintenance program.

The department has since addressed many of those findings, including hiring licensed mechanics to maintain trucks and instituting a preventive maintenance program. Both Mayor Thomas M. Menino and Fire Commissioner Roderick Fraser issued statements yesterday hailing their progress.

“Since receiving the reports, the Fire Department has prioritized and instituted numerous key changes in the operation of its Vehicle Maintenance Division,’’ Fraser said. “The department continues to work to implement the reports’ recommendations.’’

“I commend Commissioner Fraser for his swift action after this terrible accident, executing these changes as they are critical to ensuring that a tragedy like this never happens again,’’ Menino said.

But the report released yesterday also includes dozens more recommendations for improvement, 112 in all, that cover everything from speeding up firefighter fatality investigations to mandatory seat belt use in firetrucks.

The inquiry, which took more than a year, found that Kelley and two other firefighters riding in Ladder 26 were not wearing seat belts, although it is unclear whether the belts could have changed the outcome because of the sheer force of the crash, the report said.

Fire Department spokesman Steve MacDonald declined to comment on specific recommendations, saying the department would not be commenting on the report beyond Fraser’s statement.

The report takes particular aim at Menino and department management in many of its findings, blaming them for short-staffing the firetruck maintenance division, underfunding truck maintenance, and failing to replace aging trucks quickly enough.

In a surprise conclusion, the panel recommended that the maintenance division once again be staffed by uniformed firefighters, but they would be trained as mechanics. Menino ordered the replacement of firefighters in the division with licensed mechanics after the crash last year.

The inquiry was conducted by a panel composed almost entirely of members of the firefighters union, who have long resisted use of civilians to maintain trucks or do other jobs traditionally performed by union members.

One government watchdog said yesterday that, overall, the inquiry report identified key issues that should be addressed, but that some of the recommendations, such as staffing the maintenance division with uniformed firefighters, are unwarranted.

“Some of the recommendations appear to reflect union priorities that would be better addressed in another forum,’’ said Matt Cahill, executive director of the Boston Finance Commission.

It was the second time that a union-dominated board of inquiry has been criticized for letting the union’s agenda influence its investigation. In 2008, a similar panel did not address whether intoxication may have played a role in the deaths of two firefighters at a West Roxbury restaurant fire, even though autopsy reports showed one had cocaine in his system and the other had a blood alcohol content of 0.27, more than three times the legal limit to drive in Massachusetts. The union has refused to acknowledge the test results and has fought random drug and alcohol testing of its members.

Since the truck crash last year, the firefighters union has sought to deflect blame from the driver and the firefighters responsible for firetruck maintenance who were not licensed mechanics. Edward Kelly, president of Local 718, has instead lashed out at city administration and Fire Department management, faulting them for the improper upkeep of equipment.

“It is our sincere hope that policy makers responsible for procuring and maintaining fire apparatus in Boston utilize this report to correct the failed policies which led to Kevin’s death,’’ Kelly said in a statement. “His sacrifice deserves nothing less.’’

Conley’s investigation of the crash found the driver of Ladder 26 had only “limited classroom instruction and no driver training in the proper use of air brakes in downhill and emergency circumstances.’’ He did not know how to check brake pressure before he got behind the wheel, and then, when the brakes failed, he did not know how to engage secondary braking systems. He pumped the brakes, releasing remaining pressure from the brake system, and put the truck into neutral, preventing the secondary brakes from engaging.

A detailed Boston police report on the crash concluded that union firefighters who were not licensed mechanics repeatedly adjusted the brakes in violation of national safety guidelines.

After an outside contractor replaced brake parts on Ladder 26 in 2008 with “unsuitable’’ parts, firefighters adjusted them manually, instead of having them serviced professionally.

The National Transportation Safety Board has said such adjustments are “a dangerous practice that can have serious consequences.’’