THIS STORY HAS BEEN FORMATTED FOR EASY PRINTING
Special Report 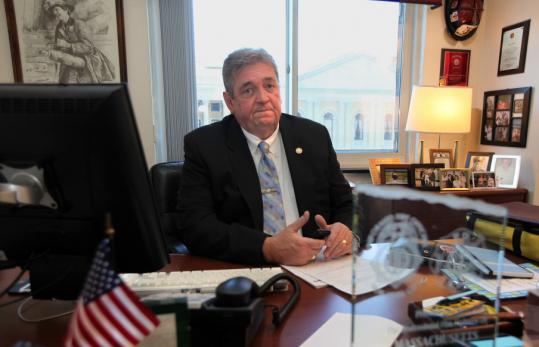 It was the spring of 2009, and Salem Mayor Kim Driscoll, staring at a $1 million shortfall for her city, had an idea: What if she could get employees to pay more for their health care?

Salem had already trimmed 18 positions since 2008, partly to help offset rising municipal health care costs, and Driscoll offered the city’s eight unions a deal: No further layoffs if they agreed to raise, from $5 to $15, certain copayments. She even pledged to pay the first five higher copayments for every worker.

“To my mind, it was a no-brainer,’’ Driscoll said. “But we got turned down by all eight unions. One of them, the police, wouldn’t even discuss it.’’

It is a familiar lament. Mayors, city and town leaders, and state officials, including Governor Deval Patrick, have launched repeated efforts to rein in the expense of providing health care to municipal workers, retirees, and elected officials.

But organized labor, fiercely protective of its members, has largely refused to budge, resisting local efforts to transfer more health care costs to workers and move communities onto the state’s health care plan. State lawmakers have shown little appetite for forcing an overhaul of the system.

The state forbids cities and towns from shifting health care costs to employees without bargaining with unions. It is this aspect of state law that municipal officials say the Legislature must rewrite to address the crisis.

Municipal unions and retiree groups, however, have for decades cultivated close ties on Beacon Hill - spending generously in campaign contributions - and have so far successfully fought major changes.

Nancy O’Donnell, president of the Salem Police Patrolmen’s Association, which represents about 50 patrol officers, said police rejected Driscoll’s proposal for higher copayments because just a year earlier they had reluctantly agreed to her demand that officers pay an additional 5 percent in premiums.

“We didn’t feel it was right to come back for more,’’ she said. “Basically, we had to stand our ground.’’

O’Donnell bristled at the suggestion that employees should bear a greater burden of health care costs. She said it was up to the mayor and other City Hall officials to come up with “creative solutions’’ to the budget crisis, including possible tax increases and better management.

Still, she said, “I really don’t know what the answer is.’’

In recent months, cities and towns from Braintree to North Reading have tried to win similar health care concessions from unions. In Arlington, town officials spent a year at the bargaining table before all unions finally agreed in November to join the state’s health care plan, a move the town said would save as much as $2.5 million annually. But at the last moment, the teachers union backed out, killing the deal.

“It was terribly disappointing and discouraging,’’ said Brian F. Sullivan, town manager. “Without the deal, we’re back to facing a substantial budget deficit.’’

Robert McCarthy, president of the Professional Fire Fighters of Massachusetts, an umbrella group for municipal firefighters, said unions are not about to just give away health care benefits won in tough negotiations over many years.

BENCHMARKS SET EARLY
So how did we get to this impasse?

The Legislature first gave cities and towns the authority to provide coverage in the 1950s, but only if approved by the local city council or by town voters.

Many communities initially decided against providing benefits. Those that did give them were limited by law to paying no more than 50 percent of premiums. Across the state, about 10 percent of municipalities - mostly towns - still adhere to that original 50 percent rate, including Hingham, Barnstable, and Hudson, according to a 2008 Massachusetts Municipal Association survey.

Lawmakers gradually gave cities and towns wider discretion in setting the proportion of premiums they could pay. With health insurance historically not a huge budget driver, some municipalities offered, during contract negotiations, to pay a higher percentage in exchange for lesser pay raises.

In 1989, the Legislature established a cap of 90 percent on municipal contributions to HMO premiums. But that cap became a benchmark as many unions fought to increase their benefits.

“Since that time, municipal unions have been aggressively resisting municipal efforts to increase employees’ share of premium cost,’’ said Paul Mulkern, an attorney who specializes in municipal health care law.

The Legislature decades ago also linked health care and pension benefits. Anyone who qualifies for a pension qualifies for health care coverage. But there is one key difference: With pensions, employees have to work decades to earn full retirement benefits; with health care, municipal employees, the moment they reach 10 years of service, are entitled under state law to full benefits when they retire, from age 55.

This has made even relatively low-paying jobs, such as teachers’ aides and school cafeteria workers, highly coveted.

“People understand the value of health care benefits, and there’s great competition to get any job because of the benefits,’’ said Frank J. Zecha, director of the Brookline retirement system.

PUSH FOR CHANGES FALLING SHORT
With great fanfare, Patrick in his 2007 inaugural address invited municipalities into “a new partnership with state government,’’ one that promised to bring long-sought relief from persistent increases in local property taxes.

The Legislature responded by crafting a bill to allow cities and towns to shift their employees and retirees from locally managed health care plans to the state’s much larger, more flexible one, called the Group Insurance Commission. Consolidating all municipal plans into the state GIC would save more than $1 billion a year by 2018, according to estimates by the Massachusetts Taxpayers Foundation and the Boston Municipal Research Bureau, two nonpartisan business-backed watchdog groups.

The GIC saves taxpayers money in two ways, including by requiring employees, retirees, and elected officials to pay more out of pocket.

In contrast to cities and towns, the GIC is free by law to make changes in the health care plans for its 265,000 subscribers without union bargaining. As recently as Feb. 1, the GIC imposed higher copayments to meet a funding shortfall. The GIC, in some cases, requires a $250 copay for hospitalizations; in Boston, subscribers pay nothing.

The GIC also uses its market clout, as the state’s largest purchaser of health care insurance, to get better rates, said Dolores L. Mitchell, the GIC executive director. “We get better service because we are a bigger customer,’’ she said.

But the bill allowing local communities into the state plan contained a major catch. It required a 70 percent vote of a committee of local union representatives before a municipality could join, effectively giving teachers unions, typically the largest, a veto.

After some early interest, unions have shut the door, and the initiative has fallen far short of expectations. In the first year the GIC was offered, 10 municipalities, school districts, and charter schools joined; the second year, there were 15. But then the exodus from local plans ground almost to a halt; only Brookline and Hopedale have signed up to join, as of July 1 of this year.

“The City of Boston would save more than $18 million a year if its employees paid the same copays and deductibles as the state GIC,’’ said Lisa Calise Signori, director of administration and budget for the city. “That’s the entire budget for the Parks Department.’’

Leaders of communities that have joined the GIC say it has made a huge difference. Springfield officials credit the GIC as a major factor in the city’s recent financial turnaround. With Springfield’s finances still shaky, the city’s unions agreed in 2007 to become the first municipality in the GIC. The move lowered annual health care costs by about $7 million.

One study, conducted in 2009 by the University of Massachusetts-Boston and Harvard University’s Kennedy School of Government, confirmed Springfield’s savings.

There are two bills pending on Beacon Hill that would give cities and towns the authority to reduce health care benefits without union approval. One was filed by Boston Mayor Thomas M. Menino, the other by the municipal association.

“It’s simple: Health insurance costs are unsustainable over the long term,’’ Menino said. “The more we pay for health insurance, the less we have for city programs.’’

Both bills remain in committee, and proponents are not optimistic they will move forward. A separate measure on Beacon Hill originally included a provision to give communities greater flexibility in setting health care benefits, but it was deemed “too controversial’’ and removed, said state Representative Paul J. Donato, Democrat of Medford, the bill’s lead sponsor.

Meanwhile, even with greater attention in Massachusetts and nationally toward reining in the expense of medical care, no one expects health care costs to stop their rapid rise anytime soon.

“It’s a cataclysmic situation,’’ said Marc Waldman, Wellesley’s treasurer. “Something has to happen.’’