Craft soared above skies of Hamilton 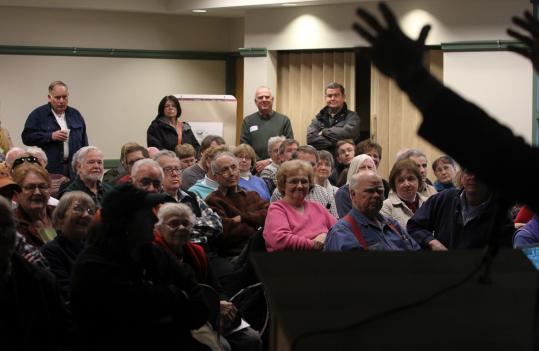 The first in a series of events was held at the Hamilton-Wenham Public Library yesterday to commemorate the centennial of flight in Massachusetts and pioneers such as W. Starling Burgess. (Essdras M Suarez/Globe Staff)
By Eric Moskowitz Globe Staff / February 28, 2010

HAMILTON - One hundred years ago this month, the wealthy and the curious, enthusiasts and doubters, streamed into Mechanics Hall on Boston’s Huntington Avenue for the country’s first exhibition of all types of aircraft.

Upstaging the balloons, the showstopper was a “heavier-than-air’’ biplane built in Marblehead by W. Starling Burgess, an assemblage of wood, wire, and linen “so replete with airy, fairy grace that all onlookers were captivated,’’ the Globe reported.

The catch? Neither it, nor the other planes on stage, had yet taken flight.

But Charles W. Parker, a well-to-do visitor from Kansas, was so impressed he promised Burgess $5,000 if he could make it fly. So, 100 years ago today, they carted it by horse-drawn wagon through the woods to Hamilton, where - perhaps even to Burgess’s surprise - it soared to an altitude of more than 30 feet, made a 40-degree turn, rumbled 120 yards through the sky, and slammed down on the ice of Chebacco Lake.

Burgess had himself a deal, and the first successful, powered, manned flight in New England history.

“Like all good stories, there’s triumph, there’s tragedy, and most important there are fascinating people who did amazing things,’’ said Ted Russell of the Massachusetts Aviation Historical Society, telling the story yesterday to a standing-room crowd at the Hamilton-Wenham Public Library, the first in a series of events planned by the society to commemorate a centennial of flight in the state.

Burgess was the descendant of an old merchant family that had suffered reversals. Educated at Milton and Harvard, he followed his father into yacht design - each would build multiple America’s Cup defenders - and made frequent appearances in the society pages, divorcing and marrying every few years. He also wrote poetry, built planes under contract for the Wright brothers, became a Navy designer, and worked on a three-wheeled car with Buckminster Fuller.

But in late 1909 he was just 31, with more ambition than cash. He teamed with Augustus M. Herring - a journeyman aviation pioneer who had worked for Octave Chanute and just split ways with Glenn Curtiss, two prominent names from aviation’s first decade - and the two built the plane that would steal the show in Boston in February 1910.

Among others, they attracted the attention of Greely S. Curtis, a businessman and aviation enthusiast who would bankroll Burgess’s airplane company, and Parker, the Kansas visitor, who owned a carousel maker.

They needed an open space for their test, so Burgess convinced Norman Prince to let him use his family’s estate at Chebacco Lake in Hamilton. Prince would go on to fly for France in World War I before the US entry - he brought down five enemy planes before dying after a crash - but in 1910 was merely a young Harvard Law student fascinated with aviation.

So they set out for Hamilton, where they made history, at least for New England. This was six years after the Wright brothers took flight at , N.C., but progress elsewhere was largely halting, partly because of patents held by the Wrights, Russell said.

The engine was capable of 25 horsepower and relied on castor oil and water that had to be heated first in a nearby kitchen to achieve the proper viscosity. The plane had a four-blade wood propeller and skids instead of wheels, plus a set of novel ship’s-sails on top, a row of triangles that looked like shark fins and that Burgess theorized would stabilize the plane in flight.

Herring served as pilot, manning the hand-held steering rudder and foot-controlled elevating rudder. The only way to stop was to cut the engine, and the plane landed so hard it cracked Herring’s seat and one of the skids.

But it was a beginning. Burgess established an airplane factory in Marblehead, and his test flights and incremental successes on Plum Island through the spring and summer made regular headlines in local newspapers. And when the Harvard Aeronautical Society decided to hold a grand Aero Meet in September in Squantum, Burgess’s craft would feature prominently.

On April 17, the aviation historical society will hold a centennial ceremony at Plum Island Airport. The society will also place historic markers at Chebacco Lake, at Plum Island, and in Quincy later this year, to honor the first flight, subsequent test flights, and Harvard-sponsored show, respectively.

“The person who has not seen a flight before, tiptoes breathless on first witnessing the marvel of a machine leaving the ground,’’ read a newspaper account of the Harvard meet, reprinted years later in Harvard Magazine. “When the first machine went up, a policeman from one of the suburban details on duty at the grounds quite lost his official reserve, and danced up and down like a boy at a ball game. ‘Gee, but that’s great!’ said he. ‘Ain’t that great? Why, that’s the greatest thing I ever saw in all my life.’ ’’