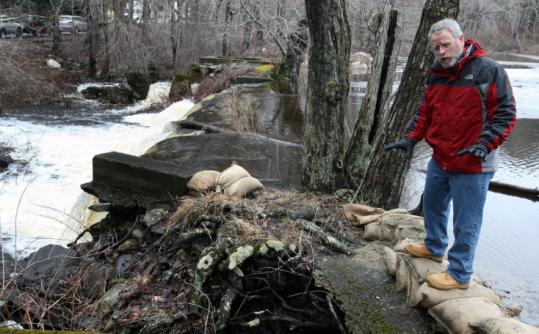 FREETOWN - State emergency officials have decided to breach, or tear down, the centuries old Forge Pond Dam within days, saying it poses an imminent danger to the town and its residents.

The dam threatened calamity downriver as rising water levels caused by recent rainstorms pushed the structure to its limits. As soon as the water along the Assonet River subsides and a bid for the $300,000 project is accepted, work will begin.

The announcement to tear down the dam came late yesterday afternoon, about a day after a dozen residents living downriver evacuated their homes and authorities began a vigil of the 8-foot-high, 260-foot-long earthen, stone, and concrete structure built more than 200 years ago.

A new dam will eventually be built, officials said.

Before the breach announcement, Kurt Schwartz, the state’s undersecretary of Public Safety, said in a press conference held on a bridge not far from the dam, “If there were to be a catastrophic failure of this dam, there is a real potential for significant property damage and loss of life.’’

The dam’s owner, Andre Fournier of New Bedford, did not maintain or repair the dam for years, according to DCR officials. Fournier failed to respond to repeated orders and recommendations for the Office of Dam Safety dating 11 years ago, and he failed to pay the fines levied against him in the past three years, DCR officials said.

Three years ago, DCR lowered the water level at the dam, and in 2008 developed an emergency action plan with the town in event of an overflow.

The Forge Pond Dam has undergone constant monitoring recently, with the DCR visiting it in June, December, and just before the latest rains.

Over the past several years, the state has experienced a rash of threatened catastrophic scenarios at aging dams, such as the Whittendon Pond Dam in Taunton. That 100-year-old wooden structure appeared as though it would give way in 2005 under the burden of the rain-engorged Mill River and send a 6-foot wave of water crashing through the downtown area.

Hundreds of residents living downstream evacuated because of the threat. The dam held but was replaced by a stone dam.

Here, residents and town officials have repeatedly expressed frustration about the state of the dam, saying the town is threatened with every significant rainfall or thaw.

Howard Glasser, 80, who lives in a house across the street from the dam, said, “The thing is that this situation has existed for so long and yet the town seems helpless in being able to do anything about it. In the early 1970s we had a really terrible scare and everyone thought it might go, but we thought something was done since then to prevent that from happening again.’’

Jane Fox, chairwoman of the Board of Selectmen, said during the news conference, “We also know that every time there is a weather occurrence that this dam is affected and the structural integrity of this dam is further compromised. It is our goal working collaboratively with the state to see that we fix this finally so that we don’t have a unpleasant or a very dangerous life-threatening event in the very near future.’’

At Grandpa’s Place in the town center, store clerk Joann Fratelli said yesterday morning, “My boss told me two hours ago we would have enough warning to evacuate the area. He said to just be on the lookout, and be ready to evacuate right up that hill.’’