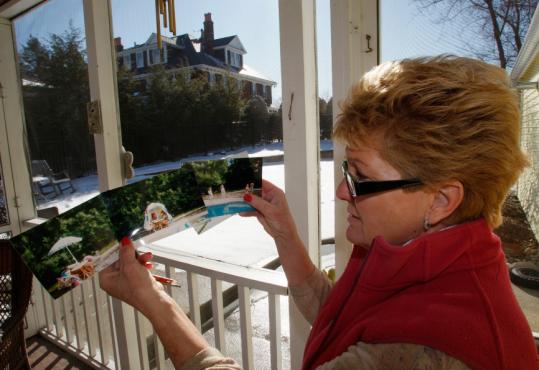 Elise Arrigo showed how her view in Norwood has changed since Ernie Boch Jr. replaced the trees that brought privacy to her backyard. (Barry Chin/ Globe Staff)
By Emily Sweeney Globe Staff / February 22, 2010

NORWOOD - Ernie Boch Jr. doesn’t know what it’s going to take to make a deal with his neighbors.

Glenn A. and Elise M. Arrigo, who live next door to the local car mogul, are suing Boch. The couple recently filed a lawsuit accusing Boch of removing trees that they say he had agreed to preserve, which they contend robbed them of their privacy and depreciated the value of their property.

The suit also says that “the overreaching and gaudy expansion of Boch’s mansion’’ disrupted their lives for years, and that because of the situation, Glenn Arrigo has developed asthma and is so stressed that he can no longer work. The Arrigos say Boch is trying to pressure them into selling their house to him, so he can expand his estate.

Boch said the lawsuit, filed against him and his wife, Kristen, in US District Court last month, caught him by surprise, and he called the allegations preposterous.

“I think this is ridiculous, with a capital ‘R,’ ’’ he said in a phone interview last week.

The Bochs and Arrigos live in a quiet residential neighborhood in Norwood close to the Automile, the Route 1 strip made famous by Boch’s father, the late Ernie Boch Sr., who coined the company’s catch phrase, “Come on down!’’ and built the family auto business into a billion-dollar empire.

Boch’s home is a stately brick mansion on Sumner Street. The house was built in 1929 on a swath of land that was later subdivided into several smaller lots, one of which is owned by the Arrigos.

Boch moved there in 1997, and has since expanded his compound by purchasing four smaller homes around the mansion. He demolished the house next door to the Arrigos and built an indoor swimming pool in its place.

The Arrigos’ home, a two-story pale yellow Colonial-style house on Plymouth Drive, sits behind the Boch mansion. They purchased the four-bedroom house in 1985 and raised their three children there.

Coincidentally, the Arrigos also sell cars for a living - albeit on a much smaller scale. They own Glenn’s Auto Action, a used car dealership in Canton.

The roots of the dispute date to August 2005, when Boch applied for a special permit to build the indoor pool.

The Arrigos went to the Zoning Board of Appeals hearing to find out more about Boch’s plans and asked that the row of tall pine trees that grew along the perimeter of their backyard be preserved.

The Arrigos had planted the trees more than 20 years ago, with the blessing of their former neighbors, and the trees are now part of Boch’s property.

Once the town granted the zoning variance to Boch, the Arrigos appealed the decision in Norfolk Superior Court.

They dropped their appeal, however, after reaching a settlement in August 2006. Boch agreed that no “matured pines’’ next to the Arrigos’ property would be removed; that the fence would remain in the same location; and that no lights would shine on the Arrigos’ property, according to the lawsuit.

The Arrigos said they were told Boch’s construction of the indoor pool would take six months to a year, but it ended up stretching out over several years, during which time they said they had to endure loud noise, dust, and construction workers walking through their yard.

“It’s awful,’’ said Elise Arrigo. “It [was] as if we [were] living right in the middle of the Big Dig, with the trucks constantly backing up, and that beeping. Every Friday, I would take the hose and have to clean the whole back of my house because of the dust and the dirt.’’

A few years ago, the Arrigos say they offered to sell their house to Boch.

In the phone interview last week, Boch described the asking price as “ridiculous amounts of money’’ and said he declined.

Then in October 2008, Elise Arrigo said, she looked out the bathroom window and saw a crane pulling out the 18 pine trees, one by one.

“That was the final thing. We couldn’t take anymore,’’ she said.

The Arrigos said it took them more than a year to hire a lawyer and prepare the suit.

In the lawsuit, the Arrigos allege that Boch breached their original settlement agreement by removing the trees and aiming spotlights and security cameras on their property. The Arrigos also allege their lawn was damaged when the new fence was installed.

Boch said he had no choice but to remove the trees. An arborist had determined that the root systems were damaged and were in danger of falling down.

“The trees got removed because they were dying,’’ said Boch, who has planted new trees on that spot. “What I replaced them with is way better.’’

He added, “You gotta understand, I want privacy, too.’’

Boch also said he never aimed cameras and lights on the Arrigos’ property (“Why would I want to look at them?’’) and that the contractors were respectful of his neighbors. “The company I hired is one of the best construction companies in the country,’’ he said.

Boch says he can’t understand why the Arrigos were against the project. “I’m beautifying the neighborhood,’’ he said.

Glenn Arrigo said the indoor pool facility sits a few feet away from his backyard. “It wasn’t supposed to have windows facing us, there weren’t supposed to be lights facing us. He breached the contract and he’s been torturing us for five or six years,’’ he said. “He’s put a lot of strain on me and my family.’’

The Arrigos are seeking compensatory damages, punitive damages, damages for pain and suffering, and lawyer’s fees, costs, and expenses.

“They love the house, but they don’t have any privacy anymore,’’ the Arrigos’ lawyer, Theodore H. Goguen Jr., said of his clients.

Goguen said squabbles between neighbors are common, “but not at this magnitude, where you got someone with more power than the other - more financial power. That gives [Boch] a distinct advantage in doing whatever he wants to do. He rules because he’s got money, not because he’s right.’’

After the Arrigos filed their lawsuit, the story was quickly picked up by a local news blog, UniversalHub.com, which posted a copy of their complaint online.

Boch said he plans to file a response to the suit this week, and hopes it will be dismissed.

“I would hope the judge throws this out,’’ he said. “It’s ridiculous.’’