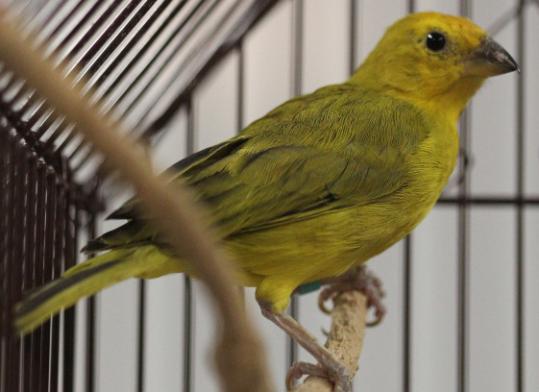 A saffron finch was one of many confiscated from a house in Ashland last weekend. (Matthew J. Lee/ Globe Staff)
By Peter Schworm Globe Staff / February 21, 2010

They are just 6 inches from head to tail, little bursts of yellow flitting through the air. But when it comes to courtship, the male saffron finch gives little quarter to its romantic rivals.

In Brazil, gamblers have traditionally exploited the South American songbird’s aggressive nature for competitive cage fights, and now the blood sport has come to Massachusetts. In the shadowy world of animal fighting, the melodious finch has apparently become the latest victim, authorities and advocates say.

“It happens much more frequently than people imagine,’’ said Brian Adams, a spokesman for the Massachusetts Society for the Prevention of Cruelty to Animals. “It’s deep underground, very dark and deeply rooted. And it’s very difficult to infiltrate.’’

In Ashland last weekend, police seized more than 20 finches and 40 cages with removable dividers from a grimy, feather-strewn basement of a large farmhouse, marking the first time the practice had been uncovered in Massachusetts, authorities say.

They found wooden cages that had been specifically designed for fights, each with a separate compartment where a female finch is placed to arouse the males.

“They each sing for the female’s attention,’’ said Greg Fawkes, a sergeant with the Ashland Police Department. “Then they lift the divide, and the two birds attack each other. They’ll peck each other’s legs off. They are already aggressive, then the owners condition them to fight.’’

Authorities believe it may be connected to a broader bird-fighting ring that extends to Connecticut, where last summer police arrested 19 men and seized 150 birds in a house raid that drew national attention.

All the men were originally from Brazil, and five lived in Framingham and Marlborough.

Known as canary fighting, the practice was common in Brazil until it was outlawed some 20 years ago, Brazilian-Americans and police say.

“This is a lot bigger than anyone thinks,’’ Fawkes said. “I think it’s rampant. I really do.’’

Finch fights are high-stakes affairs. Owners breed finches for aggressiveness, and sharpen their beaks to make them more lethal.

In Connecticut, police seized antibiotics and supplements administered to the birds to increase their endurance. The birds usually fight to the death.

Strong fighters are valuable commodities, often selling for more than $1,000 each. The sum reflects the scale of the money changing hands, police say.

“The gambling is heavy,’’ said Ben Trabka, a police detective in Shelton, Conn., the site of last summer’s raid. “If you’re spending over $1,000 on a bird that might be killed, obviously there’s money to be made.’’

For animal fighters, the tiny birds carry a number of advantages. They are easy to conceal and transport, even in large numbers, and are far less disruptive than larger fighters, such as dogs and roosters.

They require little space to fight, and are relatively inexpensive. They also breed easily, allowing owners to build up a flock without drawing attention.

More than 20 men were at the Ashland home last Saturday, all Brazilian natives who were here illegally, Fawkes said. Most would not provide their names and said they knew nothing about the birds.

They were not arrested but some were detained by immigration officials to determine their status.

Police said they have identified one man they believe owned some of the birds and plan to charge him with animal cruelty. They are also investigating three other men they believe were involved in the operation.

Breeders said male saffron finches are naturally combative when confronted with a rival, but are otherwise sweet creatures “bred for their beauty,’’ said Ron McGilvray, a canary and finch breeder in Spencer. “This is just despicable,’’ he said, adding that the Ashland case has made him wary of unscrupulous buyers. “Now I’m more suspicious. My radar has gone up.’’

Growing up in Brazil, Fausto da Rocha would tag along with his uncle on Sunday afternoons to watch the canary fights, joining large, raucous crowds of men who laid money down and cheered on their bets.

But about two decades ago, the fights were outlawed as barbaric throughout the country.

“Now it is against the law to have finches in a cage,’’ said da Rocha, a 49-year-old who lives in Quincy. “To hear those birds is so beautiful.’’

When saffron finches fight in the wild, they have room to retreat, making their confrontations less deadly, specialists said. Finches typically live five to nine years, and their aggressive nature never wanes.

Other Brazilian-Americans said the fights continue on the sly in their homeland, but until now had never heard about fights being staged in the Boston area. Most doubt the practice is widespread.

“I really don’t think so,’’ said Marcony Almeida, a Everett resident who works closely with Brazilian immigrants. “Everyone’s been talking about it, and everyone’s surprised to find out it’s going on here.’’

“Some are not in good shape,’’ said Alan Borgal, who directs the Animal Rescue League of Boston’s Center for Animal Protection. “But I think the prognosis is good.’’

Since the media coverage of last Saturday’s raid, the rescue league has received six complaints from people who spotted neighbors carrying a large number of small birds into their homes, he said.

Over the years, Borgal has encountered a number of exotic forms of animal-based gambling, even fish fighting. Still, finches caught him by surprise, he said.

“I thought finch fighting was an old wives’ tale,’’ he said. “But I guess I was wrong.’’