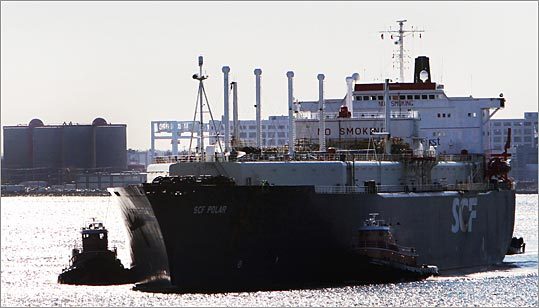 It began with a dot on the morning horizon, backlit by the February sun. “That’s definitely it,’’ said Jim, a resident of the Charlestown Navy Yard, as he peered through a pair of binoculars.

Within a few minutes, the sound of a helicopter filled the air above Boston’s inner harbor, the distant dot took the shape of a ship, and the flash of police lights from nearby boats reflected off the glassy surface of the calm water.

A liquefied natural gas tanker, flanked by Coast Guard and police boats, was making its way to the Distrigas terminal in Everett, an event that occurs just about once a week in our grand metropolis.

Now would be a good time for a confession: I don’t think I’ve spent more than a minute thinking about the LNG issue and whether the ships are potential terrorist targets. I’ve heard Tom Menino say these tankers represent a grave threat to the safety of the entire city. I’ve heard state officials say we needed to trust the Coast Guard to do its job. I’ve heard the Coast Guard say everything was under control. I’ve heard Distrigas, the company that undoubtedly makes a fortune from the shipments, breathe a sigh of relief.

But like most Bostonians, I’ve never actually witnessed one of these tankers.

At least that was the case until I accepted an invitation from Charlestown resident Sherrie Cutler to watch an arriving ship from her living room at Flagship Wharf.

The invitation came, not coincidentally, as the Coast Guard approved gas shipments from Yemen, a Middle East country that has emerged as a training ground for American-hating terrorists. Those shipments could start anytime now.

So there I was, trying to act blasé about Cutler’s stunning condominium, as if I regularly hang out in harborside homes with sweeping views of the water and the Boston skyline. All the while, the ship appeared to actually be growing - and growing. It kept heading in our exact direction, as if it were going to dock in Cutler’s tub.

Soon enough, the ship’s name, the SCF Polar, was visible, as well as human-sized letters across the ship’s bridge that warned, “No smoking.’’ I wondered if anyone on the crew spoke English.

By then, the Polar was right in front of us, so close it felt like you could touch it or smell tobacco on the captain’s breath. Hopefully, the ship’s structure was better than its cosmetics; the thing was begging for a fresh coat of paint.

This kind of proximity lent itself to new perspective. I could picture a guy with a rocket launcher in any one of the hundreds of condos or offices on the ship’s path causing a fireball that, despite what Distrigas assures us, would roll from Faneuil Hall to Framingham. And please, spare the details of the ship’s double hull.

We hassle old ladies who have shampoo in their carry-on bags at Logan Airport. We bar parking all around the Hancock tower. We strip people of their belts going into government buildings.

And we allow a massive ship with liquefied natural gas from a nation like Yemen to sail down fairway-width waterways into some of the most densely populated parts of our region. Terrific.

“I’m not a scaredy-cat type of person,’’ Cutler explained to me in a later conversation. “On the other hand, I do have an active imagination, and it scares me when I look out and see how close those are.’’

No need to explain. I was just about running for the hills.

Actually, where I ran was a wharf in the shadows of the Tobin, where I watched slack-jawed as a pair of tugboats turned the massive vessel around for its trip under the bridge.

It made me feel only a little bit better that a surprised State Police trooper requested in no uncertain terms that I leave.

The mayor wants an offshore site to unload the natural gas, far from the masses.

From the vantage of Flagship Wharf, you see more than a glorious view of the harbor. You see that he has a point.