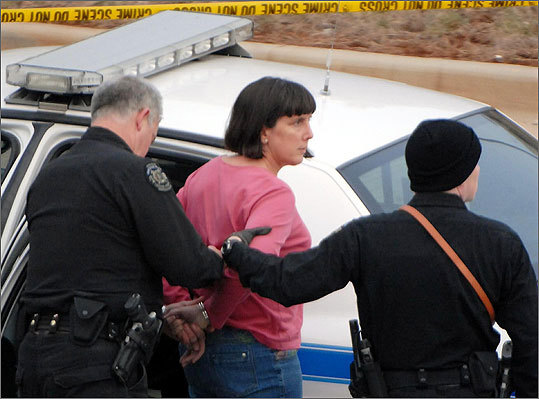 (Dave Dieter/AP, Huntsville Times) Amy Bishop is taken into custody by Huntsville, Ala. police on Friday, Feb. 12 in connection with fatal shootings on the University of Alabama at Huntsville campus.
By Brian McGrory Globe columnist / February 17, 2010

Nobody needs another investigation into whether Amy Bishop killed her brother by accident or on purpose when she fired a shotgun into his chest on Dec. 6, 1986.

The families of the three dead faculty members in Alabama will attest that it’s too late for that now.

What we need, though, immediately, is for the governor to appoint an independent prosecutor to investigate whether local and state authorities were corrupt or completely incompetent in the way they rushed to exonerate Bishop of criminal responsibility in the death of her 18-year-old brother, Seth.

In Massachusetts, the public has a right to believe that when a young man with a promising future dies from a gunshot, detectives will aggressively chase down every lead and analyze the death from every possible angle before they deem it to be accidental or criminal. In Huntsville, people at the University of Alabama have a right to know whether ineptitude or inaction in Massachusetts led to their tragedy.

Just to recap, Amy Bishop, a 44-year-old neurobiology professor allegedly shot and killed three colleagues at a faculty meeting on Friday after she was not granted tenure.

On Saturday, the Globe revealed she had shot and killed her brother in Braintree in December 1986. She and her mother said it was an accident, and she was not charged.

Throw in the fact that Amy Bishop was a suspect in a failed 1993 mail bombing and that she once punched out a fellow diner at a Peabody pancake house, and I don’t think anyone needs a flow chart to show how the Alabama massacre might have been prevented.

For starters, this is what needs to be asked, preferably by someone with subpoena power:

Question 1: Why did it take 11 days for investigators to interview Amy Bishop after she killed her brother? The State Police report said that Braintree detectives wanted to give her “sufficient time to stabilize her emotions.’’ But 11 days? You can play a seven-game World Series in 11 days and still have time for the championship parade. Does this mean that if a crime suspect acts hysterical enough, they’ll be given time to take a Caribbean cruise?

Question 2: As my colleague Kevin Cullen asked yesterday, when Amy Bishop claimed to fire two accidental shots, is the second one really an accident?

Question 3: After Braintree police realized that Amy Bishop stormed into a car dealership after the shooting, allegedly pointed the shotgun at employees, and demanded a getaway car, did they really think she was fine to simply be released a couple of hours later?

Question 4: For that matter, given the fact she had just killed her brother, pointed a gun at a passing motorist, and threatened workers at Dave Dinger , shouldn’t there have been some charges involved, maybe involving a firearm? Why did she have an extra round in her pocket when she was arrested?

Question 5: What was the “disagreement’’ about between Amy Bishop and her father on the morning of the shooting and how did it affect Bishop’s mindset?

Question 6: How did the car dealership incident never make its way into the State Police report? How was John Kivlan, the hard-nosed first assistant district attorney in Norfolk County, never aware of the episode? Did nobody with a badge and a notebook ever talk to anyone else?

There are investigators involved who are now dead, others who are old, and one, former Norfolk district attorney William Delahunt, who is a member of Congress.

Mayor Joseph Sullivan of Braintree and Police Chief Paul Frazier ought to be lauded for pursuing the truth.

So, too, should Norfolk District Attorney William R. Keating, who said yesterday there was probable cause to charge Amy Bishop with assault with a dangerous weapon, but that the statute of limitations has expired.

The state needs someone who can transcend boundaries and go through it step by step.

We owe Alabama, and ourselves, some answers, and right now the aftermath feels as fractured as the failed investigation.