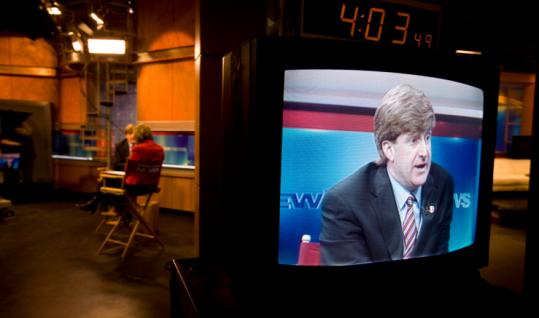 US Representative Patrick Kennedy took to the airwaves to discuss his decision not to seek reelection. (Rose Lincoln for The Boston Globe)
By Stephanie Ebbert and Eric Moskowitz Globe Staff / February 13, 2010

Patrick Kennedy’s decision not to seek reelection, leaving Congress without a Kennedy for the first time in more than six decades, was less political than personal, he told the Globe yesterday.

“People who know me or know my political history know that I’ve faced a lot more difficult political obstacles than anything I’m facing now,’’ he said outside a television station in Providence. “People in this state have been with me through very big ups and downs. . . . That wouldn’t have been a problem.’’

Kennedy, a strong campaigner with a sturdy war chest, said he did not believe he was at risk of losing reelection but that he lacked the “fire in the belly’’ he needed for a campaign season.

“There’s no doubt that I’m carrying a lot of grief and feelings that I think occupy a lot of my emotional energy,’’ he told WPRI-TV. “And right now you need to be able to give everything. And right now I want to focus on delivering for this state, and I know I can do that for the next eight months.’’

The often-troubled congressman, who last year admitted himself to an addiction treatment center, also told WPRI-TV that the death of his father, US Senator Edward M. Kennedy, provided a “moment of clarity when we think about what’s really important.’’

“It’s pretty simple in this respect: I went through something that caused me a great deal of soul-searching and self-reflection,’’ Kennedy told Rhode Island Monthly in an exclusive interview in the March issue, released yesterday. “Right now, a personal life is of greater value. Emotional connections that are real and loving and personal just trump everything else.’’

Kennedy, who was elected a Rhode Island state representative at age 21, has consistently won elections despite sometimes challenging news. But a recent poll by WPRI found his popularity slipping, and he faced a viable Republican challenger in state Representative John J. Loughlin II of Tiverton.

Kennedy’s announcement - recorded in a two-minute advertisement that was planned to air before “60 Minutes’’ on Sunday - set off a cascade of political candidacies and speculation on who else would enter the race for the seat.

“Obviously the field is about to get very crowded here in Rhode Island, which I find interesting,’’ said state Representative Jon D. Brien, a Woonsocket Democrat who has formed an exploratory and finance committee for the congressional seat. He said he was the only Democrat willing to challenge Kennedy for the seat when he was still in the race.

“I need to take a step forward and decide whether or not the finances are going to be available to me to run a real campaign,’’ he added. “I know I won’t have the political support because I’m more of an independent conservative Democrat.’’

William Lynch, chairman of the Rhode Island Democratic Party, plans to announce his candidacy for Congress today, the Providence Journal reported on its website, and the mayor of Providence, David Cicilline, is a possible candidate; neither could be reached for comment yesterday. House Finance Chairman Steven M. Costantino said he may run for mayor if Cicilline runs for Congress, the Providence Journal reported. Political observers also expect Lieutenant Governor Elizabeth Roberts, who is running for reelection, to consider a run for Congress instead. She could not be reached yesterday.

A spokesman for Attorney General Patrick Lynch, the brother of the party chairman, shot down rumors that he could be enticed to end his run for governor to run for Congress instead. “He is absolutely under no circumstance running for Congress,’’ said spokesman Mike Mikus. “He’s running for governor, 100 percent. He will not be changing his mind.’’

Kennedy had hung on in the past despite controversies. Three years ago, he crashed a car outside the Capitol and pleaded guilty to driving under the influence of prescription drugs, then checked himself into the Mayo Clinic. In recent months, he waged a public spat with the Catholic Church over its opposition to health care overhaul legislation based on its abortion provisions and criticized as “a joke’’ the candidacy of Scott Brown, the Republican who became the unlikely successor to his father in the Senate.

Philip Johnston, a former Massachusetts Democratic Party chairman and a Kennedy friend, defended him against the negative publicity he received for those statements.

“I think he was absolutely correct about everything he said, and it was simply the fact that his last name is Kennedy that there was some blowback on it,’’ said Johnston. “What’s most refreshing about Patrick is the fact that he is genuine and he expresses what he feels. It’s a rare occurrence for a politician today, and it will be very much missed.’’

Kennedy told the Globe yesterday that he did not view Brown’s election as a sign of broader trouble for his party.

“That was a special election, first of all,’’ he said. “It was a very energized opposition to what is understandable, and that is, the people of Massachusetts have a good health care plan, they don’t want to end up subsidizing everyone else in the country.’’

Buddy Cianci, a former mayor of Providence, said he would consider a run for either the congressional seat or one of the posts that opens up because of it. “I never say never,’’ said Cianci, who was convicted in 2002 of racketeering conspiracy and sentenced to five years in federal prison.

Like others, Cianci wished Kennedy well. “He has his demons and he’s been through an awful lot,’’ he said. “We all makes mistakes in life. He’s made his share, as I’ve made mine.’’