GOP makes itself at home in Southie 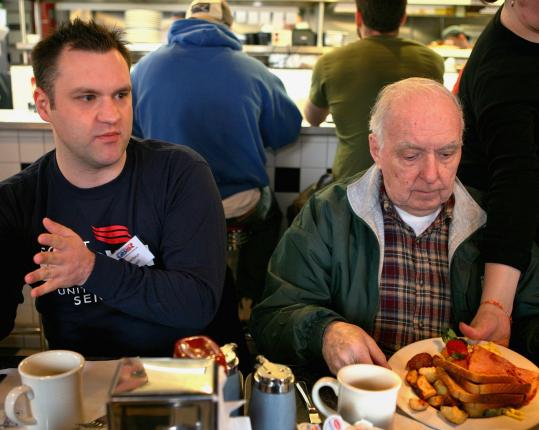 In South Boston, the most politically entrenched of city neighborhoods, people often come to Mul’s Diner to talk politics. The West Broadway diner is the kind of place where candidates and elected officials can find a reliable base of reliably Democratic voters.

Last week at Mul’s a new political movement was being hatched.

They called themselves the South Boston Conservatives. And the nine South Boston voters who gathered over coffee and French toast had come to make a Republican mark on this Democratic political stronghold.

“What is the very first thing we have to do, besides getting a larger crowd?’’ asked Eunice Fallon, a 79-year-old who last campaigned for Barry Goldwater.

Long considered an endangered species, the Massachusetts Republican is staging a comeback. In small groups across the state, conservatives are joining forces to try to seize on the nation’s impatience with change and last month’s stunning election of Republican Scott Brown to succeed liberal icon US Senator Edward M. Kennedy. Since last summer, Republican ward committees that were dormant for years have been revived in traditionally Democratic Boston neighborhoods, including South Boston, the kind of place where loyalty to family, Kennedys, and ward bosses with job offers made voters lifelong Democrats, despite their socially conservative mores.

“I have this little elderly lady in my building; she was afraid to go down to the polling booth and vote Republican because she knows the ladies who have been there forever will know she voted Republican and will tell everybody,’’ said Jason Healey, a 33-year-old technology software salesman and Connecticut transplant who moved to South Boston in 2007.

The traditionally Irish Catholic enclave always had a socially conservative mind-set defined in part by its resistance to court-ordered busing to integrate schools and its successful Supreme Court battle to prevent gay rights groups from marching in the St. Patrick’s Day Parade. But the neighborhood’s deep ties to its politicians and labor kept it so securely Democratic that Republican ward committees effectively stopped functioning in the early 1990s.

Those calculations may be changing, with an influx of new people and a dramatically altered economy.

South Boston was the only city neighborhood that voted overwhelmingly for Brown. And the Republican went there for a campaign stop that was filmed for a successful ad that showed him interacting with voters at a time his Democratic opponent was being criticized for seeming aloof.

Fallon, who spotted Brown that day, was so excited to see him campaigning in South Boston that she circled the block to look again.

In recent months, Healey said he reorganized South Boston ward committees by tracking down people from a list of about 350 South Boston registered Republicans he got from City Hall. He needed only two willing volunteers to become officers.

“I really didn’t know how to approach people about this,’’ he said. “And especially with the Irish names, I kept getting multiple Murphys. I would reach out to them on Facebook, and they’d be like, how dare you say that I’m a Republican?!’’

State Representative Brian Wallace, a South Boston Democrat, said he doesn’t remember Republican activity in his neighborhood for 30 years. “As the party went, so did the Republican Party down in Southie,’’ Wallace said.

Wallace, first elected in 2003, now faces at least three challengers, including Patrick Brennan, the new chairman of the newly reorganized Ward 6 Republican committee in South Boston. Like other Republicans here, Brennan talks about his New England upbringing as if he had been politically closeted.

“They always knew I was a Republican, even as a 10-year-old kid,’’ said Brennan, who grew up in New Hampshire. “I come from a very blue-collar, middle-income family. My dad, he’d always sit down and have conversations. I was always probusiness. He always kind of challenged me.’’

The South Boston Republicans are staging a coming out party on March 24 at the Atlantic Beer Garden on the waterfront. And today at Perkins VFW Post, they are planning their second meeting, inviting not just Republicans but also Tea Party activists, unenrolled voters, and conservative Democrats. They’re hoping to recruit conservative candidates and to announce a campaign school to help them prepare to run.

“It’s all about votes. It’s all about getting candidates into office,’’ said Healey. “Whether they’re registered as an R or unenrolled, it doesn’t matter.’’

Just 11.4 percent of the state’s voters were registered Republican by the end of 2009, less than a third of the state’s 37 percent Democratic enrollment. Most Massachusetts voters refuse to commit to either party.

Jennifer Nassour, the Massachusetts Republican Party’s chairwoman, is focusing on the unifying principles of fiscal discipline and two-party governance.

When she became chairwoman last year, she had just two full-time employees, a computer system that overloaded every day at 4 p.m., and a mouse that routinely left droppings on her desk.

“The first day, I sat there with my hands on my face and said: ‘What the hell was I thinking? What did I inherit?’ ’’ Nassour said in an interview.

One problem she inherited was a $65,000 debt that she committed to repaying by the end of last year. After all, she said, “the Republican Party should be fiscally prudent.’’

Then she began trying to build up the party at the grass roots, focusing on events to attract young professionals, like a tequila tasting that was expected to attract about 35 and brought in 125, she said.

On Wednesday night when a snow emergency left Boston looking like a ghost town, Nassour joined more than a dozen GOP candidates at Boston Beer Works on Canal Street for a meet-and-greet that attracted about 50 young professionals.

“My God, do things look a lot different than when I started a year ago!’’ she said. “. . . The wind is at our back. It is time to get back out there and keep up the activism.’’