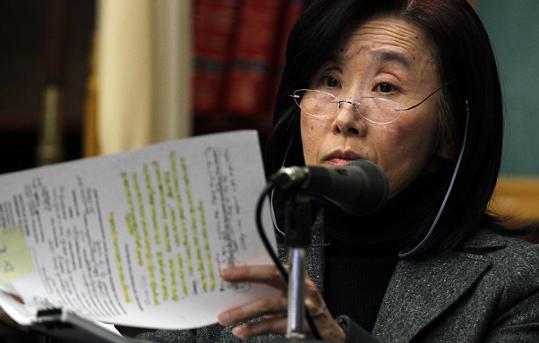 BROCKTON - The jury that convicted a South Shore woman this week of killing her 4-year-old daughter with an overdose of psychotropic drugs was also outraged by the conduct of the child’s psychiatrist and hoped the doctor would be held responsible in some way for the girl’s death, according to several jurors interviewed a day after the verdict.

“Every one of us was very angry,’’ said one juror, who requested anonymity to avoid retaliation for her role in Tuesday’s second-degree murder conviction of Carolyn Riley. “Dr. Kifuji should be sitting in the defendant’s chair, too.’’

Another juror said that while the 12-member panel found that the 35-year-old mother was primarily responsible for Rebecca’s death, many jurors were “off the wall’’ when they heard the testimony of Dr. Kayoko Kifuji of Tufts Medical Center. She said they were struck by how quickly Kifuji diagnosed Rebecca with bipolar and hyperactivity disorders, as well as how little the doctor seemed to supervise the mother’s dispensing of medications.

“It blew me away,’’ said that juror, who asked to remain unidentified for fear of reprisals.

Rebecca’s psychiatrist was the focus of some of the most powerful reactions from the jurors after a three-week trial that left them emotionally and physically exhausted.

While Kifuji’s attorney defended the psychiatrist and said jurors saw “only pieces of the full extent of diagnosis and treatment’’ of the girl, several jurors said they feel Kifuji bears some responsibility for the child’s overdose of psychiatric drugs, which were dispensed by a troubled mother.

Kifuji is facing a medical malpractice case filed by the estate of Rebecca Riley, though that case is not expected to go to trial for at least a year.

Other than the nationwide publicity given to the Riley case, in which Kifuji is mentioned repeatedly, the only overt sign that Kifuji had potentially questionable conduct is on the Board of Registration of Medicine’s website.

In a section dealing with disciplinary matters, the website lists the dates, from February 2007 to September 2009, in which Kifuji started and was permitted to end a “voluntary agreement’’ to stop practicing psychiatry.

Still, when asked if the board’s investigation concluded that Kifuji acted within acceptable medical standards, spokesman Russell Aims responded by saying that the board “closed the complaint against Dr. Kifuji without discipline.’’ He said the board, however, “reserves the right to reopen a case if new information comes to light.’’

The psychiatrist will not face criminal prosecution. A grand jury last summer declined to indict her, and Kifuji testified in Carolyn Riley’s trial only after being granted immunity from prosecution.

With her Boston attorney, Bruce Singal, at her side in court, Kifuji had initially declined to testify by invoking her right against self-incrimination. That move forced the government to grant her immunity as the only way to compel her to testify.

Singal defended the 55-year-old psychiatrist, saying by e-mail yesterday that her treatment of Rebecca has been “reviewed and cleared on numerous levels.’’ He said a Tufts Medical Center review found her care appropriate.

Singal went on to say that he is confident that any thorough examination of the doctor’s care of Rebecca would show she acted “in the best interests of this seriously ill child, and diagnosed and treated her in full accord with acceptable medical standards.’’

Several jurors in the mother’s trial said they never questioned whether Carolyn Riley was culpable, and an acquittal was never a possibility. When faced with a choice between first-degree murder and two lesser options of second-degree murder and manslaughter, the panel was divided.

Throughout much of their discussions, roughly half the members tilted toward a conviction of first-degree murder, one juror sought a manslaughter conviction, and the rest were focused on a second-degree murder conviction, according to a third juror, who also asked to remain anonymous.

The jurors said that during the 19 hours of deliberations behind closed doors, many wept while looking at photos of the girl’s body on the floor next to her parents’ bed. They said everyone felt the girl had pneumonia, but that she would not have died without dangerous levels of drugs in her body.

Patricia Wen can be reached at wen@globe.com