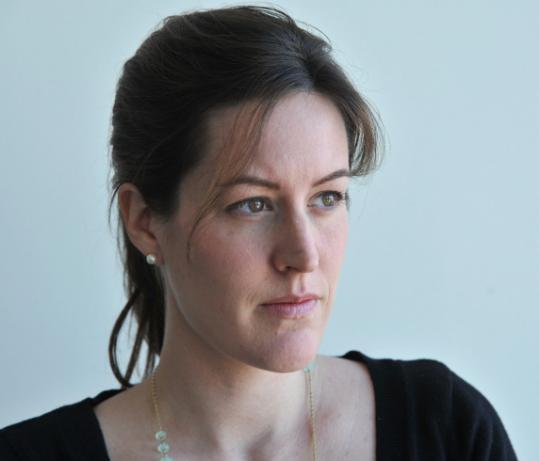 (John Reynolds for The Boston Globe) Alyssa Burrage has a history of asthma.
By Jonathan Saltzman Globe Staff / February 9, 2010

Alyssa Burrage says she was smoked out of her new $405,000 condominium.

Burrage, a 32-year-old advertising company employee with a history of asthma, had smelled cigarettes when she first visited the bright, parlor-level condo in Boston’s South End in 2006 with her real estate broker. But the broker, she alleges, assured her that the owner must be a smoker and the stench would disappear.

After Burrage moved into the Milford Street brick row house, she says, she discovered the secondhand smoke was coming from one of two men living in the condo below. The men and the condo association refused to fix the problem, she adds, and she had to move out.

Today, in what tobacco law specialists call one of the first lawsuits of its kind to go to trial in Massachusetts, a jury is scheduled to decide whether Burrage’s real estate broker is liable for damages.

In recent years, there have been a handful of lawsuits over secondhand smoke in the state, including several disputes between tenants and landlords in Housing Court. But no one has ever won monetary damages in a case over smoking fumes, legal specialists say. If Burrage wins in Suffolk Superior Court, it could encourage similar litigation and open a new front in the battle over secondhand smoke.

Burrage, who has leased her condo out since she left the building in May 2008, says she dislikes confrontations and is hardly an antismoking crusader.

“I’m certainly not a person who’s on a soapbox saying people shouldn’t smoke,’’ she said in the Back Bay office of her lawyer. “But when it affects somebody else, that’s where the line needs to be drawn. It’s an awful thing to not be able to escape from something that’s hurting your health.’’

Neither the real estate broker, Joseph DeAngelo, nor his lawyer would comment on the case. In a joint court filing summarizing the case, DeAngelo and his employer, Gibson Sotheby’s International Realty, deny that Burrage questioned him about smoke in the condo.

“DeAngelo never made any misrepresentations, or any representations at all, concerning the source of the alleged smoke smell,’’ the broker’s lawyer, Jay S. Gregory of Boston, said in the filing.

Burrage also sued the two men in the downstairs condominium - Edward J. Allan, who owns the two-story garden-level apartment, and Michael Schofield, the smoker who has lived with Allan for 13 years - and the condominium association. All three defendants settled with Burrage out of court yesterday, according to Burrage’s lawyer, Colleen C. Cook. No details were available.

Earlier in the day, Schofield’s lawyer defended his client, saying that when the Massachusetts Legislature banned smoking in restaurants, bars, and other workplaces in 2004, it specified that it was still legal to smoke in one’s home.

“What Mr. Schofield has been doing, smoking in his home, is perfectly lawful,’’ said Henry A. Goodman, a Dedham lawyer.

Nonetheless, Schofield agreed to pay Burrage a settlement yesterday because it was less expensive to do that than to pay for his defense at trial, Goodman said.

The case against DeAngelo is expected to raise thorny questions about the rights of people to smoke inside their own apartments and the duties of real estate brokers to disclose accurate information about smoking to prospective buyers.

Burrage, a Brookline native, says she and her parents visited the condo several times before she bought it - the first home she ever owned. She loved its high ceilings, oversized windows, hardwood floors, and deck.

But she was concerned about the unmistakable stench of smoke, she said, and noticed that DeAngelo burned scented candles at an open house. DeAngelo assured her that with the renovations and painting Burrage had in mind, she alleges, the smell would disappear.

Burrage and her parents asked DeAngelo whether they could contact the seller of the condo or that woman’s broker, who also worked for Gibson Sotheby’s, to confirm that she was a smoker, Burrage said.

Burrage moved into the condo in August 2006, after making what she said were about $45,000 in renovations. But the smell did not disappear, she said, and she soon found out that the smoke was coming from the condo below.

As the symptoms for her lifelong asthma worsened, Burrage says, she asked Schofield to smoke outside. She said he replied, “This is my own home.’’ She also asked Allan to hire a contractor to seal his unit, she said, but he refused.

Allan disputed that in the pretrial memorandum, saying he had a contractor seal areas where smoke could waft up to Burrage’s condo, bought an air purifier, and asked his roommate to smoke on the lower floor of the apartment.

The Environmental Health Office of the Boston Public Health Commission tested the air in Burrage’s apartment the month after she moved in. It detected nicotine in her condo and “a very high concentration’’ inside a laundry closet, according to a report in the court file.

Less than two years after she moved into the condo, Burrage said, she moved out.

Richard Daynard, chairman of Northeastern University’s Tobacco Products Liability Project, which tracks secondhand smoke litigation nationally, said Burrage’s suit could make condominium owners and associations fearful about being sued and might lead to more restrictions on smoking in such buildings.

The case comes as Mayor Thomas M. Menino of Boston is pushing to ban smoking at the city’s public housing projects. The Boston Housing Authority recently said 14 units in the Franklin Hill public housing development in Dorchester would be smoke free as part of a pilot program.