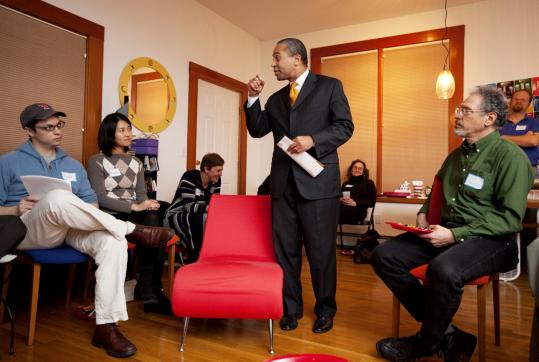 CAMBRIDGE - For Governor Deval Patrick, who was swept into office a little more than three years ago by a popular groundswell, it was a strikingly candid concession.

“We had this incredibly rich relationship that we built with the grass-roots network the last time,’’ the governor told 20 supporters at a private home here last week. “And then we got in, and we let it go. And there are reasons for that. But I think it’s a terrible thing. We missed it. I missed it personally. And I think a lot of the folks in the organization missed it.’’

Patrick’s blunt acknowledgement that he let his most powerful political muscle atrophy captures the daunting challenge he now faces. As he prepares for a tough reelection fight, the governor is trying to revive and rebuild his network of supporters, by shoring up his original base, pulling the disillusioned back to his corner, and recruiting new faces.

The central question, though, is whether he can do it as an incumbent.

Patrick, who ran in 2006 as an idealistic political outsider with an aspirational message of hope and civic empowerment, is now the one in power, facing slumping approval ratings and five eager challengers. An electorate that four years ago was ready for change after 16 years of Republican leadership is angry and economically wounded. Many of the governor’s diehard supporters are frustrated, with his fitful attempts to enlist the grass roots while in office, with some of his political priorities, and with his repeated cuts in the budget, however necessary.

“It’s a tough period,’’ said former governor Michael S. Dukakis, who is credited with running a successful bottom-up campaign in 1982 after he was ousted from office in 1978. “If Deval’s going to win this thing, it’s got to be because he revives his grass roots. It’s not going to be easy, but it’s got to be done.’’

President Obama, who rode to power in 2008 on a campaign modeled in part on Patrick’s, will undoubtedly be watching closely.

David Plouffe - Obama’s former campaign manager, who is advising the Patrick campaign - said he is “very confident’’ the governor can rebuild his network, although it will be “very, very hard’’ to do. Patrick’s volunteers, he said, will need to defend the governor’s record to their neighbors and friends, rather than introduce him as a new figure, as they did in 2006.

“The most important thing is going to be those human beings, trusted people, talking to each other,’’ Plouffe said. “That’s the way you get past the day-to-day press coverage and the negative ads that we know are coming. And in Massachusetts, you can have those types of conversations. I witnessed them in ’06, and I think they’re going to be even more important.’’

Patrick says he is cognizant of the battle ahead.

When he ran last time, Patrick pioneered the use of online tools that allowed his supporters to organize themselves and raise donations. By all accounts, it worked brilliantly.

He drew 20,000 volunteers and raised $14 million, almost a third of it online. So ardent was his following that six North Shore women launched a blog called “The Deval Experience.’’ A folk duo wrote a tune in his honor, “A Vote for Deval is a Vote for Us All.’’

But once in office, the governor struggled to keep his network alive. He wanted to “move from a grass-roots campaign to grass-roots governing,’’ but “there was no model,’’ said John Walsh, chairman of the state Democratic Party, who managed Patrick’s 2006 campaign.

The first time Patrick tried to enlist his supporters while he was in office, he organized a rally at the State House to support bills that would have allowed struggling communities to join the state health insurance plan and raise meals and hotels taxes. Lawmakers were peeved, Walsh said.

“There was definitely a push-back and a reaction from the Legislature that felt that was aggressive,’’ he said. “And at that point, [the governor] stepped back from that model.’’

Some supporters simply lost interest as their optimism collided with the unglamorous grindings of state government. “The reality of governing is much different than a campaign, and I think people got very excited and then they maybe didn’t hear the results of what’s been done,’’ said Lynne Lupien, a Lowell political blogger who volunteered on Patrick’s last campaign.

The governor and his aides concede that they failed, at times, to broadcast his accomplishments - such as signing major overhauls of the state’s transportation, ethics, and pension laws - and cast them as the fulfillment of his supporters’ high hopes. “We have to make this personal,’’ Patrick said in Cambridge.

In Cambridge, he began by asking the gathering of lawyers, students, and activists if they were nervous after Republican Scott Brown’s victory in last month’s Senate election. Every hand went up.

“Good,’’ the governor declared, eliciting laughter. “I’m not kidding. Good. Good. Because I picked the other candidate, but Scott Brown did the work. He did the work. He went out there. He engaged with people. He acknowledged the anxiety that people are feeling out there.’’

Even on friendly terrain, though, the governor encountered some resistance. Fred Berman, a Somerville activist, told Patrick that some of his friends, disappointed with the governor’s support for casinos and his failure to increase the gas tax, are planning to support Jill Stein, the Green-Rainbow Party candidate.

“If the progressives stay home, if they don’t come out in force, we will be congratulating you on one term,’’ he warned.

Brian Corr, an African-American activist, said the black men he works with in Boston are also disillusioned.

“They are furious,’’ Corr told the governor. “They feel like they’ve been left behind. Their issues have not been addressed. I do my rap. But they look at me like I’m insane.’’

Patrick responded by saying he has never been closer to reforming sentencing and criminal offender record information laws, issues important to Boston’s black community. He told Berman that at least he had tried to raise the gas tax.

Sydney Asbury, Patrick’s campaign manager, said that by the numbers, Patrick is ahead of where he was in 2006, because he has 15,000 supporters and 1,600 “organizers’’ who have agreed to find 50 supporters each.

And new supporters are showing up. When the governor traveled to Springfield after his State of the Commonwealth speech last month, he arrived at 10 p.m. to a house party packed with 70 people, said Alex Goldstein, a Patrick spokesman, who attended the event.

“At least half of them were first time, had never met the governor,’’ Goldstein said. “They were not the usual suspects.’’

Patrick, standing in the Cambridge living room, urged his supporters to get down to business.

“You know my view: You get the government you deserve,’’ he said. “Either we go out and work for it, or we say, ‘Never mind,’ and we will get what we deserve.’’