Proposals to limit cellphone use behind the wheel promise to fundamentally alter life on the road in Massachusetts.

A bill that passed the House last week would ban drivers from text messaging and require that they use hands-free devices if they want to talk on the phone from behind the wheel.

Given the centrality of electronic devices in our lives, just about everyone with a car has questions about how the police would enforce these rules. Can they catch texters who keep their cellphone below the belt, invisible to onlookers? How will you explain to the officer that you were really just dialing a phone number (which would remain legal), rather than sending a text (which would not)?

Then there’s this question from Brookline resident Steve Bacher: If you have an iPod or some other phone-like device that you plug into your car stereo to play music, could you be snagged for fiddling with a text-messaging device?

“After all, selecting musical tracks to play on the PDA may look like texting, but it’s not much different from selecting radio stations on your dashboard console,’’ Bacher wrote an e-mail.

The current bill would allow Bacher to keep playing his music from a personal digital assistant.

Audio equipment, GPS devices, and television sets designed for rear-seat passengers are all exempt from the bill’s definition of banned “mobile electronic devices.’’

But Bacher’s question, and the others like it, points to some serious difficulty for police officers who would be assigned to hand out tickets if the proposal becomes law. Sure, they can subpoena cellphone records after a serious car crash, but day-to-day enforcement of less serious offenses would depend a lot on judgments.

“The reality of it is, we don’t have a good way to enforce texting bans yet,’’ said Jonathan Adkins, spokesman for the Governors Highway Safety Association, which represents state public safety offices. “It’s a new, emerging issue.’’

A Massachusetts State Police spokesman said the agency does not comment on pending legislation.

Though 19 states and the District of Columbia have similar laws that ban texting behind the wheel, there is a dearth of long-term experience in enforcing them. And so far, it appears that it’s much easier to stop people from using a hand-held cellphone than it is to stop a texter.

The California Highway Patrol handed out 183,186 citations for using cellphones without a hands-free device since that state enacted a ban in July 2008. But a ban on text messaging enacted in January 2009 has yielded only 1,772 citations.

“Obviously, seeing somebody with a phone up to their ear is easy to spot,’’ said Fran Clader, a spokeswoman for the department.

Clader acknowledges there are plenty of ways to sneak around the text-messaging ban, but emphasizes that the consequences can be seen in the significant increase in crash risk for drivers distracted by the practice. Officers often use their discretion to reinforce that message to drivers, she said, even if they let them off with a warning.

“Rather than try to see about ways to get away with it, we would prefer that people just not do it period,’’ she said.

Not long ago, she spotted a state trooper on a motorcycle weaving around congested traffic, peering into car windows, an example of one enforcement strategy that may catch texting drivers off-guard.

Specialists said police can also be trained to pull over drivers who are swerving, slowing down, or staring at the floor mats of their cars, even if they cannot actually see a texting device.

“You are giving law enforcement a great deal of discretion in pulling someone over,’’ said Steven A. Baddour, a Methuen Democrat who cochairs the Legislature’s transportation committee.

Baddour, a one-time critic of a texting ban who now supports it, said it will be important to monitor how police use the broader authority for roadway stops to make sure it is not abused.

Many highway safety advocates who support text-messaging bans point to an irony in the enforcement question.

It’s much easier to hand out tickets for using a hand-held cellphone, but most of the science says hand-free requirements have little effect on crash rates and safety.

Studies have generally shown that cellphone conversations create a distraction for drivers, whether they occur with a hands-free device. (The Massachusetts bill bans cellphone use entirely for drivers under 18.)

The Governors Highway Safety Association, like a lot of groups that have been active on this issue, supports bans on texting, but opposes requirements that drivers use hands-free devices while using phones.

But just about everyone involved in the debate agrees that public awareness will be at least as important as enforcement.

Adkins compares the issue with seat belt requirements and drunken-driving campaigns in previous decades. It took time for drivers to recognize the serious safety implications of both issues.

“Laws are not magic bullets,’’ Adkins said. “You also have the public to have a little bit of outrage. You say you’re driving drunk, people are going to look at you like you’re crazy. Not the same yet with texting.’’

Under one major provision, drivers age 75 and older would be required to renew their drivers licenses in person, at a Registry of Motor Vehicles branch, every five years.

Currently, all drivers have to renew licenses every five years, but only have to show up in person for a vision test every 10 years. In between, they can renew their licenses online.

But statistics from the Registry show this change in the law would have little practical effect. Not surprisingly, drivers in their 20s and 30s are the most likely to use the online option. Older drivers tend to come to the Registry in person, whether they have to or not. 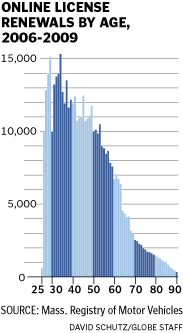