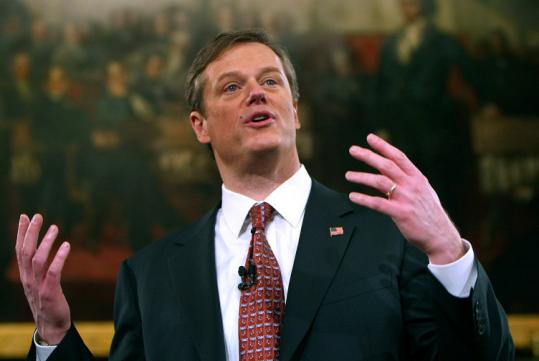 Over the years, the Shields family and employees at their medical testing network have been dependable contributors to Democrats in Massachusetts. But Thursday night, they will host their second fund-raiser for Charles D. Baker, the Republican candidate for governor and former CEO of Harvard Pilgrim Health Care.

It’s one of many examples of how Baker, in his torrid fund-raising drive, has mined with extraordinary efficiency the health care industry he left last July to become a candidate.

A Boston Globe analysis of contributor reports shows that in seven months Baker’s campaign raised more than $122,000 in contributions tied directly to Harvard Pilgrim. This includes not only $43,000 in contributions from Harvard Pilgrim’s employees, directors, and affiliated companies, but also a broad array of vendors: its accountants, auditing firm, advertising agency, information technology providers, and consultants.

In total, Baker has raised at least $263,000 from employees of health-care providers, other insurers, and related businesses in the health-care sector. That’s about 10 percent of the $2.57 million he has raised overall.

In the case of Shields Health , Baker is a rare Republican beneficiary of its political largesse. From 2002 to last year, family members and employees made 277 contributions totaling $103,000 to an array of statewide, county, and legislative candidates, state records show. They had one thing in common. All were Democrats. Since last fall, however, Shields executives and their spouses kicked in a combined $6,250 to Baker, and they will add significantly to that Thursday night when Baker appears at a fund-raiser in Boston at the Four Seasons condominium of company founders Thomas F. and Mary Shields. Three of their children, all executives at Shields, are cohosts.

Shields Health Care contracts with all the health plans in the state, providing one-fourth of all magnetic resonance imaging tests.

“He’s smart, he’s tested, and he’s experienced in a way we’re comfortable with,’’ said Carmel Shields, company vice president, who donated the $500 annual maximum to Baker in December. She also donated $250 to the campaign of Democratic incumbent Deval Patrick three days earlier. “A friend asked, and I’m loyal to my friends when they ask,’’ she said.

Is it good for business to have a friend in the governor’s office? “That’s not the reason we’re involved,’’ she said. “We’ve known Charlie for quite a while. We respect his judgment.’’

A top Baker campaign adviser, Rob Gray, said the contributions are an affirmation of the breadth of support Baker enjoys within the health care industry.

“By contributing, they’re helping to spread the word to voters who don’t know him as well,’’ Gray said. Baker’s donations from the health- care industry are roughly equal to what he has raised from small businesses, Gray said.

The Globe examination turned up at least 49 contributions totalling $16,100 from Harvard Pilgrim employees, another $4,000 from members of its board of directors, $4,750 from employees of its subsidiary, Health Plans Inc., a third-party claim administrator, and 33 contributions totalling $15,450 from Minnesota-based , a national insurer with a marketing and business arrangement with Harvard Pilgrim.

Officials from America’s Health Insurance Plans, the national trade association, chipped in $2,800 and raised thousands more from members at a Washington fund-raiser last September. Baker was an unpaid member of the association’s board until his resignation from Harvard Pilgrim.

Baker’s fund-raising tentacles have also effectively reached those who work for companies that do business with Harvard Pilgrim. Employees at the accounting firm of PricewaterhouseCoopers, which does tax work for the insurer, made 62 contributions worth $25,950, nearly all from last November. Employees of Deloitte & Touche, Harvard Pilgrim’s auditor and CPA, and other Deloitte companies gave $9,550, and Hill Holliday, the insurer’s advertising agency since the early 1990s, accounted for $11,500 in donations. For the fiscal years 2004 through 2008, Harvard Pilgrim paid Hill Holliday an average of $8 million a year, according to the not-for-profit insurer’s annual reports to the Internal Revenue Service.

Other major vendors of Harvard Pilgrim are also represented among the Baker contributors. For instance, , which was acquired by last November, is operating under a 15-year outsourcing agreement with the insurer for information technology to provide claims processing and other services. Baker received $3,800 in Perot-related donations, including $500 both last year and this from H. Ross Perot. It is not clear from the report if the contributions came from the company founder and former presidential candidate or his son, H. Ross Jr., and a company spokesman said neither could immediately be reached to determine who gave to Baker. The elder Perot retired as chairman and his son is now on Dell’s board of directors. From 2004 through 2008, Harvard Pilgrim paid Perot Systems an average of $95 million a year, the annual reports show.

Employees of Hopkinton-based have given Baker at least $9,900. The company, long a funding resource for Republican candidates, provides data storage service to Harvard Pilgrim. In fiscal 2008, the insurer paid EMC $2.1 million.

Employees at Blue Cross Blue Shield of Massachusetts, the state’s largest health insurer, have pumped more than $9,000 into Baker’s account, much of it at a fund-raiser last month hosted by Rina Vertes, the chief actuary at Blue Cross. Until she wrote Baker a check for $250 last November, Vertes had since 2002 given to nine other candidates, all Democrats, including $250 to Patrick in 2006, data show. She declined a request for an interview but through a company spokesman said she respects Baker and likes his positions on issues.

Baker’s inroads at Blue Cross are even more significant because CEO Cleve L. Killingsworth is a key fund-raiser for Patrick.

Blue Cross spokesman Jay McQuaide said the company takes a hands-off approach to employee political activity. “We neither encourage nor discourage our employees from taking part in the political process,’’ McQuaide said. “Whomever they support is their business.’’

John Walsh, chairman of the Massachusetts Democratic Party, said there is nothing inherently wrong with the concentration of Baker fund-raising in certain areas, but he said the campaign seems to be preoccupied with it.

“Charlie Baker was the CEO of an insurance company; that’s his network,’’ said Walsh, who managed Patrick’s 2006 campaign. “But there are voters who honestly wonder why, as this health-care debate has raged in Washington and been a matter of significance in the Massachusetts Senate race, Charlie Baker . . . has been silent.’’

Baker has several proposals aimed at reducing health-care costs. Most controversial is his plan to require providers to publicly disclose their prices for services, which are now considered proprietary. He also wants to convert the state’s MassHealth program for lower-income residents to a managed care system.

Paul F. Levy, CEO of Beth Israel Deaconess Medical Center, said he is supporting Baker because of his experience as a Cabinet secretary in the Weld and Cellucci administrations, the turnaround of Harvard Pilgrim under his leadership, and their friendship, which has developed over the past decade. He said Baker’s success in raising health care money is not surprising.

“It’s because we know him well,’’ said Levy, who rose to prominence in the Democratic administration of Michael S. Dukakis and donated $500 last year and again in January to both Baker and his running mate, state Senator Richard R. Tisei.

“I think it’s because people in the field really respect him,’’ Levy said.

Asked if it was the first time he had given to Republicans, he replied: “I hadn’t thought about it that way, but I think it’s true.’’

Matt Carroll of the Globe staff contributed to this report.