Skycaps across US join suit over tips 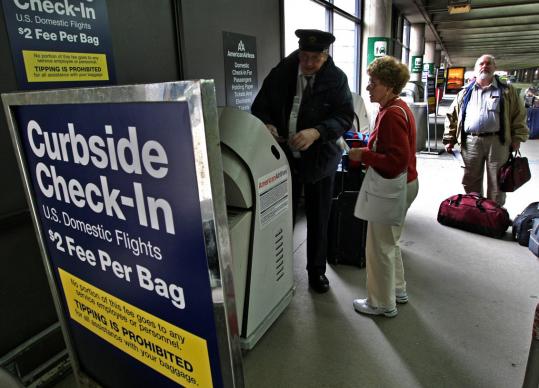 Skycaps across the country who claim they lost tips after American Airlines imposed $2 curbside baggage fees are now part of a Boston lawsuit after a federal judge yesterday certified it as a class action against the airline.

Hundreds of American Airlines skycaps at 85 airports are now part of the case, which a lawyer for the plaintiffs says seeks millions of dollars.

“It ratchets things up for American significantly,’’ said the attorney, Shannon Liss-Riordan.Tim Smith, a spokesman for American Airlines, said the company “respectfully disagrees with the court’s decision’’ and that the ruling contradicted an earlier one by Young. The airline is considering several options, including appealing. It already is appealing the $325,000 award.

Skycaps in Massachusetts have sued several airlines over similar baggage fees, but the ruling is the first to certify a class action in a contested case, Liss-Riordan said.

Don DiFiore, a longtime skycap who is due about $42,000 as part of the April 2008 award, said Young’s latest ruling made yesterday “one of the best days of my life.’’ Skycaps across the country, he said, deserve to recoup money. “This was the wrong thing to do,’’ DiFiore, 49, of Wilmington, said of the fee.

American began charging $2 a bag for curbside check-in at Logan and other airports in 2005 after losing $821 million in business the year before, the airline said in court papers.

But skycaps testified before Young two years ago that tips plunged because many customers mistakenly thought the skycaps kept the $2 bag fee and were reluctant to tip on top of it. One skycap testified his daily tips fell from about $200 to $70.

After the jury awarded the skycaps damages, the airline dropped the baggage fee.

Saltzman can be reached at jsaltzman@globe.com