Nantucketers rely on clam to predict 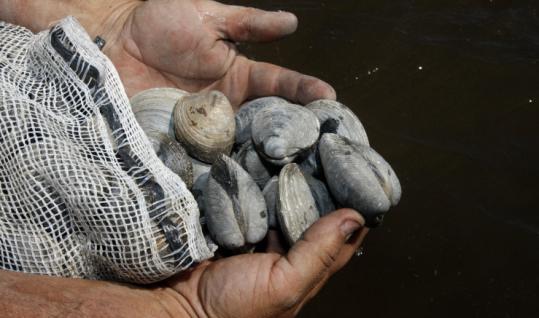 Quahogs are used instead of groundhogs on Groundhog Day in Nantucket, where Feb. 2 is known as Quahog Day. (Steve Haines for The Boston Globe/ File 2009)
By Shana Wickett Globe Correspondent / February 3, 2010

With a squirt to the left, Nantucket Harbor native Quentin the Quahog predicted six more weeks of winter, the Nantucket harbormaster said.

“Unfortunately, he agreed with the groundhog, but you can’t possibly trust a groundhog,’’ Fronzuto said.

Fronzuto was referring to Punxsutawney Phil, the Pennsylvania groundhog that the nation watches on Feb. 2 each year to learn if he came out of his temporary home and saw his shadow, which he did yesterday, meaning six more weeks of winter are expected.

On Feb. 2 - known to Nantucketers as Quahog Day, not Groundhog Day - the mollusk predicts how much longer the winter season will last with a squirt of water from its siphon. A spit to the left means six more weeks of winter are on the way, and a spit to the right means winter is over, Fronzuto said.

“It’s not very scientific, but it’s worked for us,’’ Fronzuto said.

“The groundhog is obviously not responsible, and his predictions are questionable,’’ Fronzuto said. “You certainly can’t doubt a quahog.’’

About 10 people, including Ranney, came to see Quentin’s prediction yesterday.

Fronzuto said a Facebook page will be created and a viewing box installed on the pier under the “Quentin the Quahog’’ sign to honor Quentin with a larger audience.

But for now, the clam will meet his noble and delicious demise.

“After I open him, I eat him,’’ said Fronzuto. “He gives his life for his prediction.’’