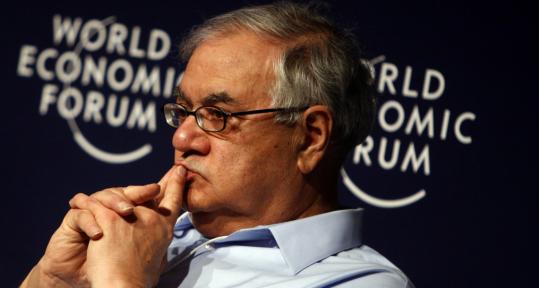 Representative Barney Frank was a one-time supporter of Fannie Mae and Freddie Mac. Now Frank says it is clear that their model in no longer sustainable. (Virginia Mayo/ Associated Press)
By Jeremy Herb Globe Correspondent / January 31, 2010

WASHINGTON - Barney Frank has been one of the staunchest defenders of and and their mission to increase access to affordable housing. Now he’s helping to lead the charge to dismantle the troubled mortgage giants.

The US representative from Newton recently made it clear that Fannie and Freddie have little support left in Washington when he said they should be abolished. As chairman of the House Financial Services Committee he could be a leading architect in their possible demise, working with his committee colleagues and the Obama administration to rebuild the mortgage finance industry.

For Frank and the principals at Fannie and Freddie, it’s a stunning reversal. For conservative critics, it’s about time. They charge that if Frank and Democrats had realized these institutions needed a basement-to-attic overhaul sooner, the impact of the housing crisis on taxpayers and the financial system would have been greatly reduced.

“He and other Democrats have concluded what many of us knew,’’ said Representative Jeb Hensarling, a Texas Republican on the Financial Services Committee. “These were ticking fiscal time bombs.’’ Frank counters that there were few signs the institutions were at such risk.

“Nobody saw this coming,’’ he said in an interview. “What changed was the complete collapse of the housing market, which hit Fannie and Freddie harder than anybody else.’’

Once the institutions failed and were seized by the government in 2008, it was clear their model was no longer sustainable, Frank said.

Fannie and Freddie own or guarantee about half of the country’s mortgages, worth $5 trillion. They combined their public mission as a government-charted agency with a private twist: as publicly traded companies, they shared profits with shareholders.

Before Fannie and Freddie’s implosion, one of their prime activities was bundling and selling mortgages as securities. That practice was extremely profitable in the housing boom of the late 1990s and early 2000s, and the agencies started buying these securities from other companies, focused increasingly on subprime mortgages.

When the housing bubble burst and the subprime market evaporated, Fannie and Freddie were left with billions of dollars of troubled - and sometimes worthless - securities. The federal government has poured $112 billion into an effort to keep them afloat.

In December, the Obama administration lifted the $400 billion cap on how much government aid they could receive. A Freddie Mac spokeswoman said she could not comment on Frank’s statement, and Fannie Mae officials did not respond to requests for comment. Freddie is now lead by Charles “Ed’’ Haldeman Jr., a former chief executive of Putnam Investments in Boston.

Frank’s one-time support for Fannie and Freddie stems from their mission to help create affordable housing. Critics, however, say his devotion to the institutions’ ideals blinded him to their flaws.

He supported Republican legislation before the housing crash to create an independent regulator overseeing Fannie and Freddie. But he balked at calls to restrict how much the agencies could borrow, arguing that critics were trying to stymie affordable housing. “I do not think we are facing any kind of crisis,’’ Frank said at a 2003 hearing.

And he bristled at suggestions their practices threatened the economy, saying critics were trying to create a “self-fulfilling prophecy’’ by calling the companies risky.

Frank originally backed a Republican bill in 2005 when it included a provision that devoted Fannie and Freddie profits to a housing fund. However, when Republicans barred groups that mobilized or registered voters from accessing the fund, Frank voted against the final bill, which failed in the Senate.

To critics of Fannie and Freddie, the Democrats, often led by Frank, dragged their feet on overhaul efforts in the early 2000s. “They just weren’t there with us,’’ said Representative Scott Garrett, a New Jersey Republican. “Barney Frank was front and center denying the risk,’’ said Charles Calomiris, a Columbia University Business School professor and critic of the companies.

Frank said the notion that he is to blame is nonsense, because Republicans did not pass substantial measures when they were in the majority. It was a Democratic Congress that finally enacted the legislation creating an independent regulator in 2008. By then, Frank said, it was too late.

Now, Frank and his Republican colleagues on the Financial Services Committee have the same goal: abolish the agencies. They agree on little else, such as what a reconstructed mortgage finance industry would look like, what the government’s role would be, and how legislators can make it happen.

And neither side is optimistic about working with the other.

“I’m in 100 percent agreement with his words,’’ Hensarling said. “My fear is his idea of abolishing is to create an even worse monster to gobble up taxpayer funds.’’ A key issue is the securitization of mortgages into bonds. Some conservative economists argue that such a process should be turned over to private companies. Liberals, however, say that private companies would neglect lower-income housing because it’s less profitable.

Frank declined to discuss specifics about what the mortgage lending market would look like without Fannie and Freddie, saying his committee is just starting to evaluate potential solutions.

But his statement on abolishing the agencies launched what will be a lengthy, contentious debate over how to fix not just Fannie and Freddie, but the entire housing market.

“The future of Fannie and Freddie is an issue with global implications,’’ said Jonathan GS Koppell, an associate professor at Yale University. “It’s hard to understate the reverberations of any change made to Fannie and Freddie.’’