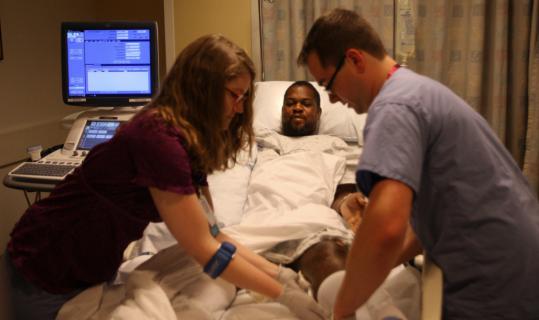 The math teacher was sitting at his desk, reading a play a colleague had given him, when the entire school began to shake. First, he felt the floor move, and then the walls started to sway.

Jean Claude Petit Homme doesn’t quite remember what happened next, but somehow the 41-year-old managed to dive beneath his wooden desk before the cement roof came crashing down, as happened in so many other buildings in Port-au-Prince, Haiti.

“It was like a hand pulled me beneath the desk - like the hand of God,’’ he said.

Most of his body was covered in rubble, with the exception of his head and hands, he recalled. The school’s director began yelling, “Petit Homme, are you dead?’’

Petit Homme was among the survivors, but his luck went beyond making it out of the rubble. Not only did he find doctors from Massachusetts to help him, he found a way to make it to Boston, on his own, one of the few earthquake victims in Haiti to receive care here.

After surviving for more than three hours under a pile of concrete and his broken desk, Petit Homme was pulled out by colleagues and relatives, his left hip shattered, his femur broken, and his kidneys damaged from being crushed. He spent the night on a soccer field beside the school, where he writhed as repeated aftershocks tormented him and the other survivors.

The next day, after learning of friends and colleagues who had died, relatives brought him to an overcrowded military hospital, where he received a shot for the pain and a pill to blunt infection. With no room at the hospital, the high school teacher returned to the field beside the school and spent another night there, abrasions covering much of his body.

With his condition worsening, colleagues brought him to a church in the Port-au-Prince neighborhood of Cange, where doctors from the Boston-based Partners in Health had set up a medical clinic. He found a place on the floor and spent about a week there, getting the best treatment possible amid the chaos.

He received intravenous fluids and a splint for his leg, but he needed an operation to repair the shattered hip, which had complicated the problems in his kidneys. The doctors thought he might get an operation when a Navy medical ship arrived, but when they learned that Petit Homme is a legal US resident whose wife and daughter live in Philadelphia, they suggested he try to make it to the United States.

One of the doctors, Rob Sheridan, a trauma surgeon at Massachusetts General Hospital who had arrived in Haiti the day before the earthquake on a previously arranged trip, wrote him a referral letter and suggested he try to fly to Boston.

With help from friends and family, Petit Homme was put in the back of a sport utility vehicle and made a painful four-hour journey from Port-au-Prince to the border of the Dominican Republic, where he was put in another car and taken to the airport in Santo Domingo. His brother-in-law met him at the airport and six hours later, at 4 a.m. last Sunday, he boarded a Jet Blue flight to Logan Airport.

“It was very painful to be on a plane,’’ he said, though he had an extra seat to help support his leg.

He knew he had to make the trip, which may have saved his life.

When he arrived in Boston, a cousin who lives here was waiting for him at the airport and drove Petit Homme straight to the emergency room at Mass. General, where he showed doctors the referral letter from Sheridan.

“He looks a lot better than when we saw him in Haiti,’’ said Sheridan, who had returned to Boston last week, as he checked in on Petit Homme Friday at Mass. General. “His prognosis wouldn’t have been good if he didn’t make it here. But it looks very good for him now. I expect he’ll make a full recovery.’’

Officials at Mass. General said they know of only one other Haitian earthquake victim to make it to Boston for medical care. They said a woman was also receiving care at Mass. General, but they had no more information about her condition.

The officials were not sure who would pay for Petit Homme’s care, they said, an issue that led to the suspension of relief flights last week from Haiti to hospitals in Florida, where hundreds of earthquake victims have received acute care.

As Petit Homme rested in a bed at Mass General, a team of doctors, nurses, technicians, and therapists came in and out of his room, checking his fluids, dressing his wounds, doing ultrasounds to check for blood clots, administering various drugs, and helping him laugh instead of wince at the pain.

His wife, Myriam Drouillard, sat on a chair beside him and watched in amazement.

Shortly after the earthquake, a cousin in Haiti told her Petit Homme had survived, but because of the poor telephone service, they had not spoken until he arrived at the hospital.

She flew up from Philadelphia, where she works as a nursing assistant and is raising their 11-year-old daughter, and was flooded with emotion when she saw him.

“It’s a miracle,’’ she said looking at her husband, whose legs were swaddled in bandages. “I was very happy.’’

The couple has lived apart for eight years, so she could earn a decent living to support their daughter and he could pursue his career in education, they said. They have seen each other twice a year.

But that will change now. When he is well enough, he will move to Philadelphia and live with them.

“I’m not going to let him go back to Haiti, at least not until he’s all better,’’ Drouillard said.

As nurses checked his fluids and brought him dinner Friday night, Petit Homme smiled and practiced his limited English.

They said he would probably remain at the hospital for several days, and then would be sent to a facility to have physical therapy.

As they walked out, Petit Homme said: “I can’t thank people enough. I’ve received more help than I could have ever asked for.’’

Correction: Because of a reporting error, a story in Sunday's Metro section about a survivor of Haiti's earthquake receiving treatment at Massachusetts General Hospital incorrectly described Cange. It is a town in the Central Plateau of Haiti.