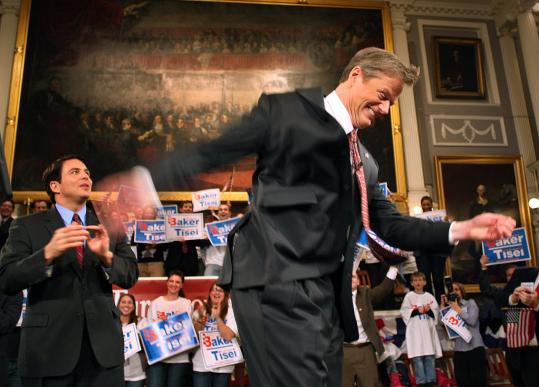 JOHN TLUMACKI/GLOBE STAFF
Republican Charles Baker was in the mood for fun yesterday as he pretended to play air guitar during a rally at Faneuil Hall to officially announce his candidacy for governor. (John Tlumacki/Globe Staff)
By Carolyn Y. Johnson Globe Staff / January 31, 2010

A cheering crowd waved flags and signs in Boston’s historic Faneuil Hall yesterday morning as Republican Charles D. Baker Jr. kicked off his campaign for governor, saying he would cut taxes and spending, and work on job creation by making it easier to do business in the state.

In a speech that wove personal anecdotes with policy positions, Baker said that he wanted to stop businesses - and people -from moving away from the state by increasing opportunities.

“If we really want people to invest in Massachusetts, we have to send the signal that state government will be a reliable, predictable, and dependable business partner,’’ said Baker. He stressed that by keeping businesses and jobs growing in the state, more people will decide to live here, too, instead of being pulled away by the “siren song’’ of other parts of the country. He added that he hoped his three children would eventually settle in Massachusetts, instead of a plane ride away.

A week and a half after US Senator-elect Scott Brown captured national attention with his upset victory in the Senate race, Baker and his running mate, state Senate minority leader Richard Tisei, also sought to feed off that momentum to bring change to Beacon Hill.

“I’m the guy Scott Brown voted with 96 percent of the time,’’ Tisei said.

The campaign kickoff drew loyal Republicans, but also unaffiliated voters, and some who said that in recent elections they had voted for Democrats - including President Obama, Governor Deval Patrick, and Martha Coakley.

“It’s an interesting time for this state. We just had an election with a senator who was not supposed to win,’’ said Bryan Nguyen, 32, of Quincy, a registered Democrat who said he voted for Scott Brown and came out to hear what Baker had to say. “I think controlling spending costs and creating jobs for people - I think that should be on people’s minds.’’

In his speech, Baker focused on the need to cut taxes and spending, as well as to balance the budget. He also said that making the state more welcoming to business was a critical step to creating more jobs. He talked about the need to make tax policies for small businesses more predictable, and told anecdotes about time-consuming government audits of sales taxes faced by struggling manufacturers.

When he sees Red Sox road games where Sox fans outnumber the home team, Baker said, what he sees is people who left the state for better opportunities.

“We’re not holding on to the next generation of people,’’ Baker said.

Nearly all the 800 seats in Faneuil Hall were filled with people who braved temperatures barely out of the single digits. Some said they came just to hear what he had to say, while others were already making plans to volunteer for the campaign.

“For the last 3 1/2 years, there’s been nothing but dead wood, everything has been stagnant,’’ said Peter J. Solomon of Wakefield, who said that he would contribute financially and emotionally to the campaign. “The budget is the most pressing issue.’’

“I hope he [Governor Deval Patrick] gets the fact we’re all angry,’’ Vaithinathan said.

While many in the crowd expressed hope that Brown’s momentum could help push Baker to victory, the differences between the candidates were also a selling point to some. While Baker and Brown both have an antitax platform, Baker is more socially liberal.

Matt Skinner, a 26-year-old sales manager from Leominster, said he liked Baker’s platform in part because of his more liberal views on issues such as abortion and gay rights. Skinner said that he voted for Coakley in the Senate race, but was excited about Baker.

“I agree with a lot of his platform,’’ Skinner said. “This is probably the first candidate I’ve gotten behind this early in the race.’’