Kennedy says decision not to run ‘wasn’t the greatest’ 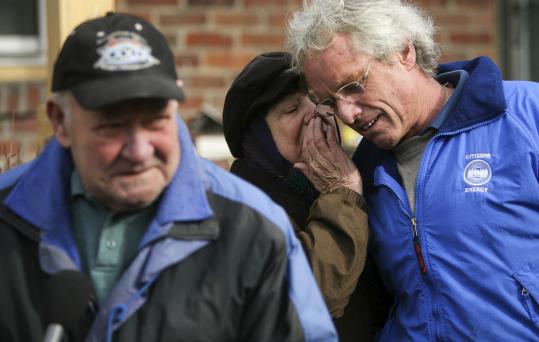 Ben Salvucci spoke to the media as his wife, Norma, whispered to Joseph P. Kennedy II outside their home in Brighton after Kennedy filled their oil tank as part of his Citizens Energy program. Kennedy considered jumping into the Senate race after his uncle’s death last August, but announced in September he would not run. (Aram Boghosian for The Boston Globe)
By Brian R. Ballou Globe Staff / January 29, 2010

Former congressman Joseph P. Kennedy II, talking publicly for the first time about Republican Scott Brown’s upset victory in last week’s special election for US Senate, wryly observed yesterday that his own decision not to enter the campaign to succeed his late uncle “wasn’t the greatest decision I ever made in my life.’’

Standing in the parking lot of a two-story red brick apartment complex on Shepard Street in Brighton, where he had been delivering oil to needy residents, Kennedy smiled when a reporter asked him whether he regretted not running. “The thought had crossed my mind,’’ he said.

Kennedy, 56, contemplated jumping into the race after his uncle’s death last August, and that consideration put the political world on edge. Several potential candidates said they would not run if he did, but Kennedy announced last September that he would not run, ending the family’s half-century of political dominance in Massachusetts.

Kennedy said in a statement then: “My father called politics an honorable profession, and I have profound respect for those who choose to advance the causes of social and economic justice in elective office. After much consideration, I have decided that the best way for me to contribute to those causes is by continuing my work at Citizens Energy Corp.’’

Four Democrats jumped into the race, and the party nominated Attorney General Martha Coakley, who was defeated by Brown, a state senator from Wrentham.

When Kennedy was asked yesterday if he was surprised by Brown’s margin of victory, he responded: “To be honest with you, I was surprised that the margin was as small as it was. If you walked around Massachusetts that last weekend, you could just feel it everywhere you went. I think everybody knew in their bones in the end.’’

Kennedy, the oldest son of US Senator Robert F. Kennedy and the nephew of the late Edward M. Kennedy, served in Congress from 1987 to 1999, representing the Eighth District of Massachusetts.

He founded Citizens Energy before taking office and continues to head the nonprofit energy company. He was delivering oil in person yesterday, as he has in previous years, to highlight the efforts of the company, which provides low-cost oil to low-income people.

Dan Payne, a Democratic strategist based in the Boston area, said in a telephone interview: “In the future, it will be hard for any Kennedy to get a post because they are already filled, there aren’t going to be any seats available soon, and anyone who wants to take on an incumbent will have a tough run at it.’’

But, Payne said, “Brown has to run again in 2012, and I think if he joins his 40 Republican colleagues in blocking everything that Obama tries to get through the Senate, he will face a tough reelection. In that scenario, it wouldn’t surprise me if Joe Kennedy got involved.’’